Why everyone’s talking about life sciences

The life sciences sector, for long a niche market, is attracting the gaze of investors, including as a way to bring ‘mixity’ to city locations.
By Georgina Power on November 30, 2020 0 Comments

The acquisition of Kadans Science Partner by AXA Investment Managers – Real Assets from Oaktree Capital catapulted life sciences into the real estate news headlines just as we head towards the end of 2020.

For AXA IM – Real Assets, the acquisition represents a “unique opportunity to enter and build immediate scale in the life sciences and lab offices sector … an emerging but high-growth asset class in Europe”.

The Kadans portfolio spans key research locations in the Netherlands, the UK and Germany. It comprises 150,000m2 of operating spaces across 20 assets with a further seven developments delivering around 70,000m2 over the next three years.

As part of our blog post on the life sciences real estate sector, we caught up with James Sheppard, head of commercial UK & Ireland at Kadans Science Partner, together with other leading figures in the sector.

The technology crowd in California’s Bay Area refer to the pharma & biotech industry as “the other tech”, recounts Steven Lang, research director specialising in life sciences at Savills.

Pharma & biotech, a key element of the life sciences industry, may be a B2C sector, but until Covid struck it was the “hidden giant”, says Lang. “Your traditional life science campus is not like your city centre skyscraper, which is easy to understand, talk about and see.” 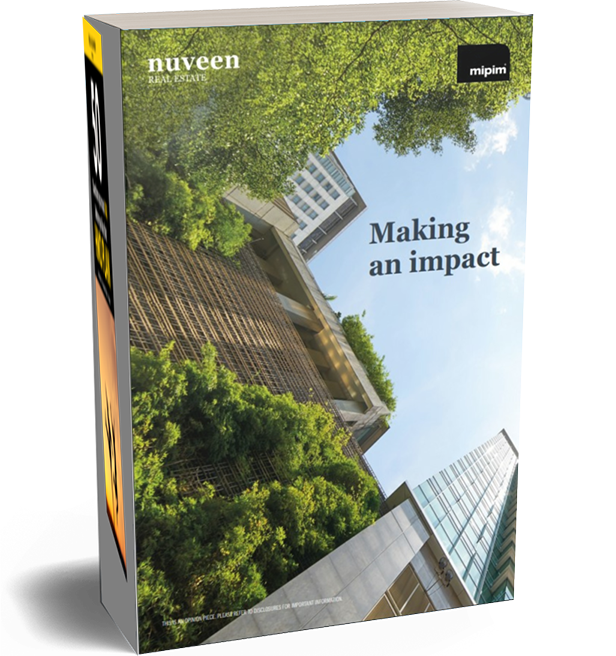 The industry is growing, and fast. Gene therapies, AI-powered drug discovery and development, consumer wearables and telemedicine are just some of the drivers transforming the sector, points out Deloitte in their 2020 Global Life Sciences Outlook.

Your traditional life science campus is not like your city centre skyscraper, which is easy to understand, talk about and see – Steven Lang, Savills

The US is the epicentre of life sciences, with the focus on Boston and Cambridge, Massachusetts (home to Harvard University and MIT), the San Francisco Bay Area (Stanford University) and San Diego. 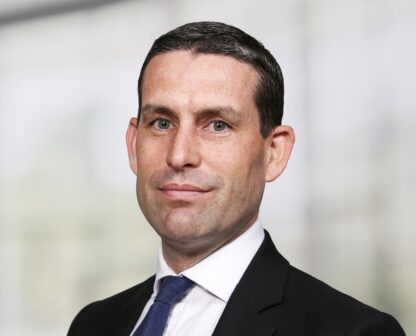 Increasingly the sector is converging with digital technology. Alphabet, Google’s parent company, for example, launched Verily in 2015 at the “convergence of healthcare, data science and technology”, while Apple, Microsoft and Samsung have all expanded their life sciences presence.

A key way of measuring the sector is through capital raised. Looking at data from Savills/PitchBook, an estimated £417.7bn of capital was raised globally in the life sciences sector in 2020; already above the £403.8bn in 2019, and a figure that is likely to climb even higher by the end of the year, says Lang.

Life sciences takes off in Europe

When NY-headquartered Pfizer announced this November the positive Phase 3 study outcome of their Covid-19 vaccine candidate, all eyes went on the pharma giant’s partner, BioNTech, based in Mainz, near Frankfurt.

The pandemic has not only put the spotlight on life sciences, but it has also highlighted the high number of small life science companies and start-ups working alongside the big names.

Many of the fastest-growing occupiers in life sciences have been created by universities, explains James Sheppard, head of commercial UK & Ireland at Kadans Science Partner. 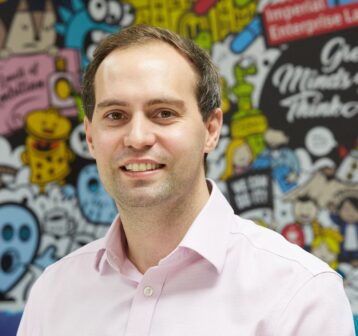 “Universities and researchers are being required to demonstrate the impact of their work – it’s no longer about doing science for science sake – and a very tangible way of doing this is through the creation of a business,” says Sheppard.

Companies are raising more capital at an earlier stage, which means they are able to grow their team quicker and consequently their real estate – James Sheppard, Kadans Science Partner

One factor behind the drive for impact has been a change in the big philanthropic investors, like the global Wellcome foundation, and the Bill & Melinda Gates Foundation, which increasingly view the funding of grants as a kind of seed-stage investment, explains Sheppard. “They want to see the results and to demonstrate impact from pumping in 20, 30 or 40 million pounds into research.”

In terms of seed funding, Europe is now looking much more like the US, where a typical series A funding for life sciences runs at US$25-50m, compared with historic levels in the UK of around £2-5m.

Demand from occupiers [is]not being met by the right supply – Sheppard, Kadans

Companies are raising more capital at an earlier stage, which means they are able to grow their team quicker and consequently their real estate provision, says Sheppard: “from a commercial real estate perspective, this then becomes a much more attractive proposition; unfortunately, however, the life sciences real estate sector in Europe has not kept pace with this change.”

Key to understanding the life sciences sector is the idea of ecosystems, often structured as clusters, corridors or triangles, and underpinned by the helix of universities, government and industry, with connectivity being another key factor.

In continental Europe, BioValley, which straddles France, Germany and Switzerland, links the university cities of Strasbourg, Basel and Freiburg and is home to some 600 pharma and medtech companies.

If you want to invest in life sciences today, you’ve got to invest in a strong ecosystem, whether established or emerging. The key locations are only going to get stronger – Lang

In Germany, Pfizer’s partner BioNTech is located just north of Rhine-Neckar, the metropolitan region home to the BioRN life science cluster, just one of many clusters across Germany. In turn, BioRN is part of the Health Axis Europe strategic alliance that links Heidelberg with Leuven (Belgium), Maastricht (Netherlands) and Copenhagen.

“If you want to invest in life sciences today, you’ve got to invest in a strong ecosystem, whether established or emerging. The key locations are only going to get stronger,” says Lang.

In the UK, together with the London-Cambridge Oxford golden triangle, Lang points to clusters in Manchester, Birmingham, Newcastle and Scotland, with South Wales as an emerging location.

In terms of the space required, the shift has been moving towards offices rather than lab space, as the role of digital technologies such as AI and deep learning grows. Sheppard puts the split at around 50/50, although this depends massively on the subsector. “This makes it much more accessible for commercial real estate providers to provide in multi-let buildings,” he adds

Demand for office/lab space in city centres has started to rise as life science companies look to attract the talent emerging from the universities.

Pharma & biotech workers prefer a location easy to commute to and near retail, food & beverage and leisure facilities, reveals the Savills survey What Workers Want, carried out in the UK pre-Covid. As Sheppard says: “Scientists are people too!”

City centres are in the same way attractive locations for digital technology companies, at a time when the two sectors are increasingly overlap – take Alphabet’s DeepMind, for example, which links AI with natural sciences.

On the supply side, meanwhile, Savills estimates that London has around 200,000 sq ft of commercially leaseable lab/R&D space and Manchester 360,000 sq ft, compared with 14.6m sq ft in Boston and 1.36m sq ft in New York City. “The delivery of more lab space is vital,” says Savills.

As the demand for retail shrinks, shopping centre space in key life science locations, especially where supply is tight in historic city centres, is being eyed for refurbishment. “Retail space offers good floor to ceiling heights and floor loadings, as well as good accessibility and local amenities – all key for life sciences occupiers,” says Lang.

Lang points to Copenhagen’s 42,700m2 Maersk Tower (top photo), home to a major Novo Nordisk research centre, as an example of life sciences being part of an urban, mixed-use district.

The concept behind Maersk Tower, designed by C.F. Møller Architects, and which won the MIPIM 2018 Award for Best Healthcare Development, is to open the university towards the local area. Facilities include an auditorium, a viewing platform and a large eating area. 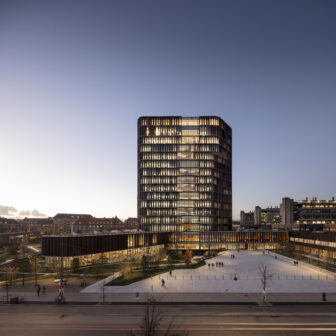 London has seen the emergence of a life sciences cluster in the neighbourhood of White City, also home to Europe’s largest shopping centre, Westfield London. While not a prime, city centre location, White City is easily accessible by air, rail and road.

Swiss pharma giant Novartis, for example, moved its UK head office from Surrey to take 54,000 sq ft at The WestWorks Building at White City Place, developed by Stanhope and Mitsui Fudosan. Other life science tenants have since joined Novartis.

White City Place is adjacent to the 23-acre White City Campus, where ICL is investing £2bn to create a “platform for innovation and entrepreneurship”.

A separate life sciences cluster has formed further east in London, near UCL, in the Euston Road/King’s Cross area, also home to the Francis Crick Institute, Wellcome and the London BioScience Innovation Centre, owned by the Royal Veterinary College.

Along with the acquisition of Kadans by AXI IM – Real Assets, three other big news headlines this year were:

Lang also points to established fund managers in the UK market, such as M&G, Aviva and L&G, who have been long-time investors and developers in the sector.

The creation of innovation ecosystems has been a key element of Kadans’ success, points out AXA IM – Real Assets in their press release. These ecosystems span the whole Kadans network of tenants and relationships across Europe, as well as within its individual buildings and campuses.

The 70,000m2 of Kadans space currently under development includes:

Whereas once life sciences was very much the alternative, alternative sector in real estate, says Sheppard, it is increasingly turning into a mainstream asset class … and it is the life sciences sector which will provide us with a much-needed Covid-19 vaccine. Watch this space.