Tom Szaky, CEO of TerraCycle : the race against our waste

"The scale at which we are growing our garbage problem outweighs the scale at which innovative solutions are coming." Discover TerraCycle's Tom Szaky about "the de-growth movement".
By Alexander Hurst on April 29, 2021 0 Comments

Tom Szaky is a different kind of CEO. It’s not the surfer hair curling down to his shoulders, the casual vibe he exudes even over a Zoom interview, or the slightly steampunk, bachelor-pad aesthetic of the room he’s in, which itself looks like a showcase for reused materials—waste wood that he found in Thailand, the ceiling painted by local graffiti artists (“if you’re noticing this, you should see TerraCycle offices,” he says). It’s because normally a CEO doesn’t exhort you to buy less stuff, and certainly doesn’t talk about “the de-growth movement” as our ultimate goal. 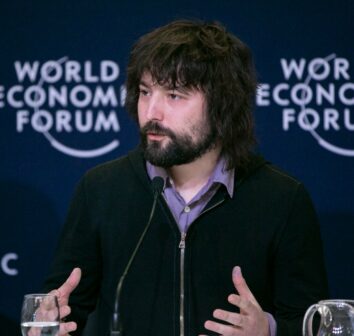 But that’s the message Szaky has for all of us, and he’s blunt about it. “The scale at which we are growing our garbage problem outweighs the scale at which innovative solutions are coming,” he says. “We’re going to have to go through some more suffering before we wake up and shift our behavior to less consumption.”

In fact, there’s a clear, traceable line that explains Szaky’s passion for waste—an industry that has seen surprisingly little innovation, even though as he explains, “everything we possess will be the property of a garbage company one day.” As a young boy, Szaky fled with his family from then-Communist Hungary in the aftermath of the Chernobyl disaster, eventually arriving in Canada by way of Germany, the Netherlands, and Belgium.

There, the reality of consumer culture shocked him in a way he never forgot. “My first television set was one I found in the garbage with my dad, and it was in color,” he tells me. This contrast in early life experiences followed him to Princeton, where as a student in a first year economics class, he was shocked again to hear a professor describe the purpose of business as maximizing profits for shareholders.

“Profit is an indicator of health, but not a reason for being,” Szaky says. During that first year at Princeton, he decided that his mission would be to launch a—healthy, profitable—business whose purpose would be to help the world tackle its waste problem. TerraCycle, the company he started while still a student, offers businesses and consumers low-friction ways to recycle difficult-to-recycle things. Stuff that many municipalities don’t deal with—like coffee capsules, cigarette butts (“That one was extremely challenging,” he says. “Figuring out how to separate the paper from the filter and clean it. Now we collect them from all over the world and turn them into everything from outdoor furniture to shipping pallets to ashtrays.”), and even the explosion of surgical masks worn in response to Covid-19.

The world’s waste crisis is indeed intense. Cumulatively, we’ve produced a total of 5.8 billion tons of plastic waste—a number that grows by roughly 300 million tons per year—and 91% of it never has been, and continues not to be recycled. Much of this waste comes in forms we are familiar with, like plastic bottles; the world produces 1 million per minute, only 50% get recycled, and of those, only 7% will become new bottles. But if packaging is the primary source of waste, the rest of the iceberg is more hidden from our daily consumer experience, like construction, the second largest generator of waste at 65 million tons per year.

To hear Szaky tell it, recyclers are like “urban miners.” The key to increasing how much recycling happens is finding stakeholders willing to fund the cost of collection and processing, minus the resulting material value. For him, that’s step one. Step two is integrating waste back into products, and step three is moving from single-use items to reusable ones. When it comes to consumers in these first two categories—those who care, but aren’t so committed that they’re probably eschewing disposable goods in the first place—Szaky thinks the key is approaching sustainability with the goal of providing better products and services to begin with, but that also happen to have sustainability at their core.

For consumers, that means reducing the amount of friction between them and recycling objects that aren’t normally taken by municipal recycling programs—which it does through generalized boxes that consumers can use to ship their things to TerraCycle for processing, as well as with through partnerships with specific brands. “You have to show companies how creating a recycling solution for your blades and razors will help Gillette convince you to buy their shaver instead of a different shaver,” he explains. TerraCycle has been successful at engaging companies in this way; 97% of its corporate partners choose to maintain or expand their partnerships with the company. For example, moving from offering recycling solutions for their products to using more recycled materials in their products.

But looking beyond consumer products, Szaky highlights construction as an area where TerraCycle plans to have a large impact in the future—but which poses its own challenges. “Often waste management companies just look at waste by how much volume it takes up,” he says. With construction site operators often looking for the cheapest way to dispose of waste as a way to keep their cost per square meter low, bringing recycling squarely into construction (or demolition) means figuring out a way to unlock value and make that value proposition clear.

Currently, the company processes “millions of kilos a month” of hard to recycle materials. Szaky expects this number to grow, as TerraCycle expands and develops new partnerships with retailers for collection boxes in stores and businesses, and a new service called Loop, which offers consumer brands’ goods in reusable packaging that can be returned and fed back into a circular economy.

The zeitgeist has changed in our favor, and people are more aware of the problems of garbage than they were 20 years ago – Tom Szaky

On the positive side, Szaky says, “the zeitgeist has changed in our favor, and people are more aware of the problems of garbage than they were 20 years ago.” But in the race against our waste, he still emphasizes that the real answer is to “to consume less, and then consume things that can go around, and then things that were made from stuff that went around—the de-growth movement is really what we have to be thinking about.”