All the data shows the stunning scale and pace of change in urban mobility. Discover in this blogpost, Vianova founder and CEO Thibault Castagne and his vision of the city of the future.
By Alexander Hurst on November 23, 2021 0 Comments

Have you ever hopped on an electric scooter, or trottinette as they are called in French, and then when you reached your destination and hit “end ride” in the e-scooter’s app, been told that you are not in a designated scooter parking area?

If so, you may very well have interacted with a company called Vianova, though you wouldn’t necessarily have known it.

“We position ourselves as a trusted third party that provides a mobility data platform,” explains Vianova founder and CEO Thibault Castagne. His company serves as a hinge between the plethora of rides providers and local governments—which are often caught between competing interests, of pedestrians, drivers, climate goals, and mobility. 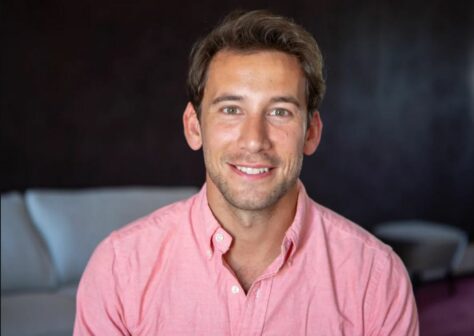 There were 25,000 of them in the city, and it was a mess – Thibault Castagne, Founder and CEO of Vianova

Immediately following the initial rollout of trottinettes in Paris, “there were 25,000 of them in the city, and it was a mess,” Castagne says. At the time, he was with an electric vehicle startup; realizing the wealth of data that came from connected vehicles and being hit with the importance of sharing public space between different types of mobility and all the various operators, he realized that there was a need for a service that could help cities manage the emergence of new forms of urban mobility.

Vianova’s mobility analytics backend software can help cities see which streets and routes are frequented by e-scooters and connected bicycles in order to know where to set up dedicated lanes and other infrastructure, allow them to “geofence” certain areas of operation and parking, and track last-mile deliveries so that delivery companies can plan more efficient routes.

All of this data shows the stunning scale and pace of change in urban mobility, all of it sped up by Covid. For example, in Brussels, Vianova has noted “basically five times the volume in terms of connected axes—and that’s only talking about connected, shared microbility [i.e., not individual bicycles, e-scooters, skateboards, “monowheels,” etc]. Vianova itself is testament to this rapid growth—founded in just 2019, the Paris-based startup already works with major European capitals, mobility companies like Bolt and Tier, and delivery companies like Amazon. And it’s expanding beyond Europe, to cities like Istanbul, Wellington, and Santiago.

A city’s public administration speaks a very different language than Lime, or Amazon do” – Thibault Castagne

A cyclist himself, and an engineer by training, Castagne often finds himself, and Vianova, in a sort of mediator role between competing urban interests. “We have the delicate position of being in the middle,” he says, “a city’s public administration speaks a very different language than Lime, or Amazon do.”

One particular challenge for organizing the urban jumble of individual cars, delivery fleets, shared vehicles, bikes, trottinettes, scooters, pedestrians, even monowheels, is that not all vehicles are connected, and so the data picture is only partially complete. Still, the data that Vianova—and thus, its client cities—do have at their disposal “provides them with enough breadth to make the right planning or policy decisions, and also [implement]the right enforcement on certain operators.”

Looking forward, Castagne makes a bold prediction. “We’re convinced that individual cars will basically not be allowed anymore in cities within the next ten years,” he says. And yet, it’s a bold prediction that already has evidence accumulating in its favor: Vianova’s home city Paris has plans to interdict cross-traffic from the city center as of 2022, and from Milan to Ghent to New York, cities seized an opportunity presented by Covid to massively reallocate space away from automobiles and towards bicycles and pedestrians.

According to Castagne, the first vehicles to disappear on the way to this car-free future will be delivery trucks and vans. Vianova is currently in discussions with Amazon about ways to replace delivery vans in Paris with bicycles and cargo bikes. “There’s no definitive date,” says Castagne, “but that’s the real goal—have your trucks coming into these European hubs, and then all the deliveries being done with micro mobility.”