Every week MIPIM Connect shines a spotlight on one of the categories in this year’s MIPIM Awards. This week we focus on the best office and business development category.
By Graham Parker on August 6, 2020 0 Comments

MIPIM has been granting awards in the office and business development category since the MIPIM Awards were launched in 1991, reflecting its status as a mainstay of most balanced commercial property portfolios

Over the years the winners have demonstrated a growing awareness of sustainability and more recently of the wellbeing of office occupiers. And the roster of winners includes some of the most prominent landmarks in the world’s business hubs. The inaugural winner was  One Canada Square at Canary Wharf in London.

One Canada Square is the building that put Canary Wharf, central London’s third business district, on the map. At 235 metres, the 50-storey building was the tallest office tower in Europe at the time of its completion in 1991.

One Canada Square was designed by Cesar Pelli in partnership with Adamson Associates and Frederick Gibberd Coombes for Canadian developer Olympia & York. The external design features that account for the building’s enduring appeal include the distinctive linen-finish stainless-steel cladding and the pyramid rooftop. Commercially, the large, efficient floorplates mean that One Canada Square has enjoyed near-100% occupancy. The 162,000 sq m of floorspace houses nearly 10,000 office workers. Integrated into the wider Canary Wharf district through a sub-ground shopping mall, One Canada Square is linked into the DLR and London Underground mass-transit systems.

The 1998 winner was Stadttor, a 20-storey, 84-metre office tower in Dusseldorf’s Unterbilk district. Designed by local architects Petzinka, Overdiek und Partner for Engel Canessa Unternehmensgruppe, it sits at the southern entrance to the Rheinufertunnel.

Stadttor’s distinctive features include its parallelogram-shaped floorplates, 15-storey atrium and double facade, which allows natural ventilation to permeate throughout the building. On the few days when supplementary heating is needed, waste heat is drawn from a nearby electricity plant, supplemented by heat recovery through the building’s ventilation system.

Stadttor’s total gross floor area of 30,000 sq m houses a range of office tenants, including the state chancellery of the prime ministers of North Rhine-Westphalia.

And in 2017 the award went to Ghelamco’s Warsaw Spire, the tallest and largest office building in the Central Europe region. The complex includes a 220-meter tall tower and two adjacent 55-meter tall buildings between them providing over 100,000 sqm of offices and service space.

Designed by Jaspers Eyers, Warsaw Spire introduced technological solutions that were new to Poland and set new standards of comfort and functionality. And set around European Square, the complex gave the residents of Warsaw the first public square in the city’s post war history forming a haven for of leisure and culture with art installations, fountains, coffee bars and restaurants.

Warsaw Spire became a towering symbol of the economic renaissance of Poland’s capital. 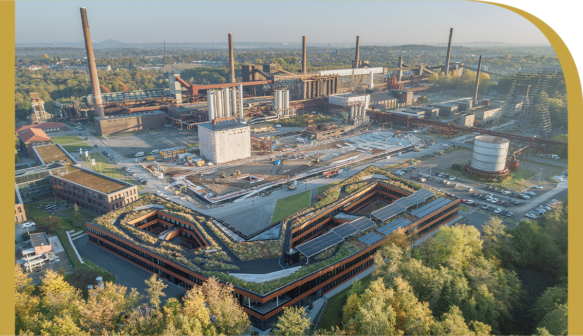 The new administrative headquarters of RAG-Stiftung and RAG AG is located at the transition zone of the cultural and natural landscape at the Unesco World Heritage Site at Zollverein in Essen. The innovative office building expresses itself as part of the circular economy and therefore it is the first project in Germany that has implemented comprehensive measures inspired by the cradle-to-cradle principles (C2C). Following the maxim “every square metre of World Heritage is precious,” the accessible and intensively planted roof compensates for the building footprint and returns the covered area back to nature and mankind. 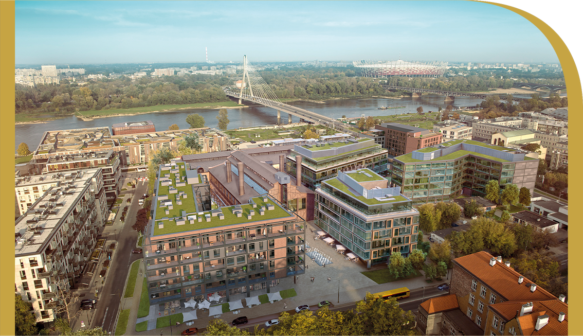 Elektrownia Powisle is a mixed-use project where, apart from a wide retail and gastronomy offer, there are three modern class-A office buildings. Nearly 22,000 sq m are occupied by many well-known brands representing a range of industries. Modern office buildings perfectly fit into the historic atmosphere of the revitalised Elektrownia Powisle and the spacious interiors allow tenants to adapt the space according to their individual needs. The comprehensive offer of Elektrownia Powiśle creates a unique place for work, business and leisure activities. Quick access to the metro, a wide culinary offer and numerous cultural and entertainment events make this place vibrant, even after business hours. 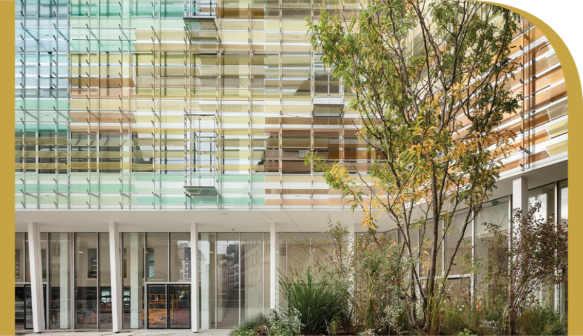 Emerging from the heart of Paris’ bustling metropolitan centre, Grand Central Saint-Lazare represents one of the most complex new projects to be built in central Paris over the last decade. Under development since 2013 by the Carlyle Group, Grand Central Saint-Lazare is a flagship project situated beside one of the busiest urban infrastructure hubs in Europe. Drawing inspiration from Gare Saint-Lazare’s extraordinary heritage as the first railway station in France, and its presence within the impressionist paintings of Claude Monet, the project is designed to reshape the district’s dense urban environment and reconnect visitors to the spirit of Paris. 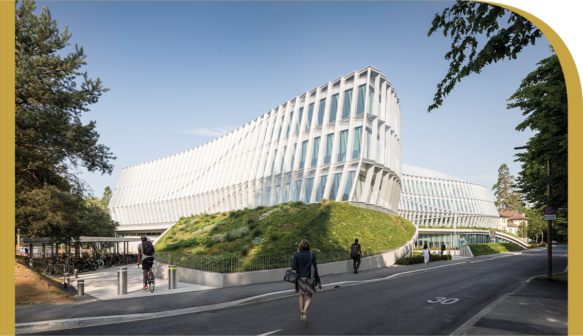 Olympic House is designed around five key objectives, translating the Olympic Movement’s values into built form: movement, transparency, flexibility, sustainability and collaboration. Following the principles of active design, the central oak staircase and its periphery define the central area for social activity and movement. The staircase is a visual expression of the unity and collaboration between the IOC staff and stakeholders and refers to the Olympic rings. The building respectfully integrates into the surrounding historical park setting, and the new design triples the floorspace compared to the former building.