A redesign of how we experience senior living

With a head office in Switzerland, The Embassies of Good Living is looking to be “globally at home” in 30 locations around by the world by 2030
By Georgina Power on August 24, 2020 0 Comments

The Embassies of Good Living is a global co-living/hospitality/wellness concept designed to change the way we perceive and experience later life.

Founded by Jan Garde in Switzerland, The Embassies of Good Living is a prime example of how real estate is more than just an asset – it is a built space, carefully designed, with the end user in mind; a ‘product’ that operates as a service, and as an experience.

The Embassies of Good Living was launched in December 2018 in Zurich.  The first is set to open in Germany, either Berlin, Hamburg or Munich, with plans to launch a total of 30 Embassies in some of the world’s most vibrant cities by 2030. 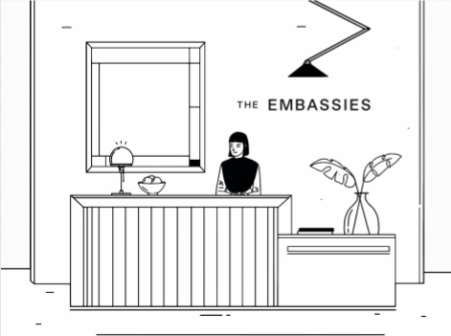 The origins of this new senior concept

The spark to launch The Embassies of Good Living came following Garde’s visits to his grandfather’s care home. “Everything screamed hospital. Nothing was attractive,” describes Garde, whose new concept is about “making people look forward to tomorrow”.

Garde has 15 years’ experience in brand marketing and customer experience, most recently leading the design network team at Deutsche Telekom.  Other key team members have backgrounds in hospitality, real estate, digital technology and healthcare – a carefully curated selection of skills and experience.

As a product, The Embassies of Good Living has found the sweet spot between:

Seniors, or ‘older’ people, as they like to be called, are living longer.  “There are more older people, but they are also demanding something different in life,” says Garde, who has devoted many hours, days and weeks to listening to older people over the past few years.

There are more older people, but they are also demanding something different in life – Jan Garde, The Embassies of Good Living

This is a new older generation: they are the baby boomers, born between 1946 and 1964 – the people who brought us punk rock, skateboarding and the mobile phone, and who are now reshaping what it means to be old.

The over-55 year old age group – the demographic for The Embassies of Good Living – is an age group that includes the two main US presidential election candidates, their running mates, and the likes of Mick Jagger (77) and Madonna (61), both still performing artists.

Author Don Ezra prefers the phrase “life after full-time work” to “retirement”.  Meanwhile Garde says that The Embassies’ demographic doesn’t ever see themselves retiring, even though they are looking to “take it easy” – maybe doing voluntary work or running a small entrepreneurial business.

David Stewart, founder of LA-based media company We Are Ageist, and a shareholder in The Embassies of Good Living, talks about how the “line in the sand of ageing has moved”.

Interestingly, a quarter of the subscribers to the Ageist Magazine are under 30, says Stewart. “This younger generation are looking for inspiration as to how to age,” he says.

As one 24-year-old reader responded: “I’d like to be like you guys when I am your age, so why would I not want to know about this?”

Other shareholders in The Embassies of Good Living include 25hours hotel company founder & CEO Christoph Hoffmann.

Before launching the brand, Garde visited over 100 homes for older people – luxury residences, state-run care facilities, people’s own homes – meeting residents ranging from the fit and active to those unable to get out of bed without assistance.

“People’s biggest fear as they get older is loneliness,” says Garde, who recounts his visit to a 94-year-old women in her “beautiful home” in Zurich, but whose only social engagements were her once-a-fortnight visit to the hairdresser.

Garde’s other main conclusions are that older people like to be around people of mixed age groups, and that although they seek community they also like to have their own privacy for when they feel the need. Both concepts have been built into The Embassies of Good Living model.

“Generally in retirement there’s a stigma attached to ‘going down’, but our demographic feel and consider themselves as continuously growing and expanding, both their work and horizons,” says Garde.

“They are looking for four key things: enjoyment from life, staying active, being part of a community, and for authentic, meaningful experiences.” 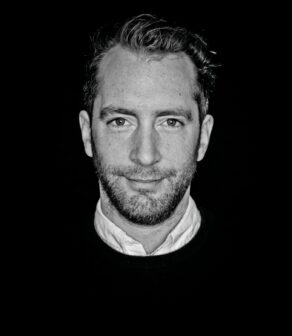 The launch of The Embassies of Good Living comes at a time of a shortage of housing for older people across Europe.

“The shortfall in older people’s housing is far greater than for starter homes,” says Adam Challis, executive director, EMEA capital markets research & strategy at JLL.  “But because older people are usually already living in their own homes, many people don’t realise this gap in the market exists.

Older people’s lifestyle requirements vary enormously, so their choice of housing needs to be varied, which it currently isn’t – Adam Challis, JLL

“You may argue that older people are the wealthiest cohort in Europe and should be able to sort out their housing themselves. But if the choices or supply don’t exist, they can’t.”

Challis adds: “Older people’s lifestyle requirements vary enormously, so their choice of housing needs to be varied, which it currently isn’t.”

While co-living tends to be seen as a concept for the sharing generations – the millennials and Gen Z – it has always existed as a concept for later living, albeit more on the care-home end.

The co-living sector has an extremely positive outlook, says JLL’s European Living Investor Survey 2020, with “over 95% of respondents expecting more investment activity over the next 12 months”.

In its global report Silver Cities: planning for an aged population released in 2018, international property company Grosvenor also points out that “there is an untapped potential market for quality, age-friendly housing”.

The Embassies of Good Living: the product

The Embassies of Good Living ‘product’ is about:

The team has been scouting cities across Europe for buildings offering 5,000-10,000 m2 of space in locations where people naturally gather; walkable neighbourhoods, with a lively local scene of bars, cultural activities, art galleries and green spaces.

We are looking to sign 20-30 year leases, depending on the territory – Garde

They will then work with building owners to carry out refurbishment and fit-out works.  Once works are completed, The Embassies of Good Living will operate the asset on a long lease and pay a “premium rent”, to reflect the initial investment made by the owner.  “We are looking to sign 20-30 year leases, depending on the territory,” says Garde. 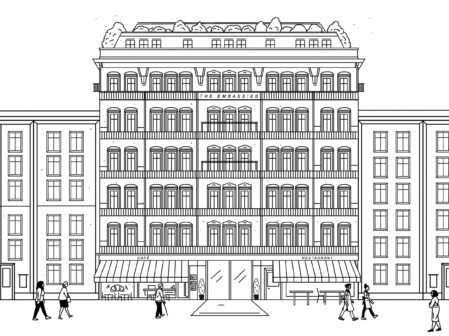 The effect of Covid on expansion plans

“And the effect of Covid-19?” I asked sheepishly, wondering how long it would take for the city in all its vibrancy to be back.

“Covid has been the single most important ‘elevator’ for what we are doing,” answers Garde.  “Not only have we hit a megatrend with the demographic shift, but by accident we have created a hyper-robust model against the pandemic, a model still financially cashflow positive even if we close all our hospitality, as the residential element works to provide the stability.”

And what’s more, Garde says: “We no longer have to compete against the co-working space in our search for properties.  Opportunities are only accelerating as landlords and operators reassess their portfolios given the current economic situation and changing real estate demand.”

The Embassies of Good Living are not diving into opportunities just yet. “We are being cautious,” says Garde.  “We are waiting to see what further opportunities may arise in the third and fourth quarters of the year.”

With a strategy to roll out 30 Embassies of Good Living around the world by 2030, Europe is the first focus, with locations in Germany, and then plans for Zurich, Vienna, Copenhagen, Amsterdam, London, Paris, Barcelona, Madrid and Lisbon.

We see huge opportunities in Asia, even though it is a more multi-faceted and culturally different market than Europe ­ – Garde

North America is in their sights too, as well as Asia, with a likely focus on Japan, Singapore, Thailand and South Korea. “We are looking to enter the Asian market earlier rather than later. We see huge opportunities in Asia, even though it is a more multi-faceted and culturally different market than Europe,” says Garde.

Not only is real estate about bricks and mortar and assets; it’s about people, feelings and emotions – at all ages, and throughout the 700,000 hours during which we are on this planet.