We talk to the of French developer Woodeum, specialist in low-carbon, timber residential buildings – and recognised as a top 100 young leader.
By Georgina Power on December 14, 2020 0 Comments

Investors around the world are eyeing residential as a safe haven, occupiers are reassessing the relationship with their homes as they seek more health and wellness, while everyone is looking to make the world’s carbon footprint lighter. Part of the answer? Timber housing.

France may have invented reinforced concrete and cross-laminated timber, but the country – the fourth most forested in the EU, and growing – has been slow when it comes to building houses out of timber.

Woodeum launched in 2014 as a pioneer in the use of solid wood (cross-laminated timber) for housing.  Since then, the company, based in Boulogne-Billancourt, near Paris, has developed over 1,000 homes; and it is on site with a further 700 and 2,500 are in the immediate pipeline.  Sales are set to almost triple this year, to reach over €200mn.

In the space of six years, we have shown that we can change the way housing is built to favour low-carbon methods – Julien Pemezec, Woodeum

The benefits of timber for residential buildings are similar to those for commercial use. Above all, it is about a low-carbon method of construction at a time when the world is scrambling to cut carbon emissions. In France, for example –  a country with a strong history of concrete – buildings currently account for 27 per cent of total carbon emissions.

“In the space of six years, we have shown that we can change the way housing is built to favour low-carbon methods,” says Julien Pemezec, CEO of Woodeum. “And we have shown that there is a strong economic model, while also bringing benefits to occupiers.” 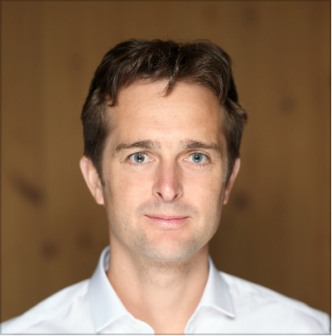 The growth potential? “Huge,” replies Pemezec. “We are very positive about our future growth projections as there is a real awareness of the need for a carbon revolution, made even stronger by the present health crisis.”

This follows Altarea Cogedim, the French developer and investor, taking a 50% stake in Woodeum last year to help expand low-carbon residential property development on a large scale in the country.  The goal is to develop 2,500 to 3,000 residential units a year by 2023, the two companies declared.

“The secret of our growth is that, at Woodeum, we have an engaged team of 50 people passionate about what they do, who are focussed on the success of each operation, and who roll up their sleeves and make things happen,” says Pemezec.

As well as for the residential occupier, that passion for well-built, aesthetic, low-carbon buildings has also spread to the institutional investor, as they too look to achieve a neutral carbon footprint for their portfolios.

BNP Paribas Cardif, for example, has bought just under half of one of Woodeum’s latest projects, Rueil-Malmaison.  Other investor partners include Generali Real Estate and French REIT Gecina.

Three of the company’s current flagship projects, or residences, as Woodeum calls them, are located in: 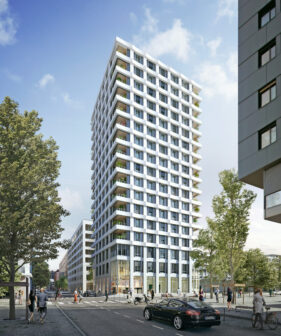 Haussmann 2.0: a timber structure with a stone façade

The signature style of Woodeum is to build the foundations in concrete and the superstructure in cross-laminated timber. The outside walls are then clad in brick or stone, in keeping with the local architectural style.

The developer first used this cladding technique at their Saint Ouen project in 2016. “These were the first modern buildings of this kind using these techniques. It is like the Haussmann style in the sense that we’ve mixed the timber structure with the stone façade.” 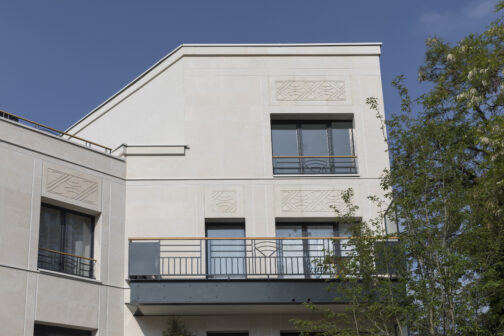 Since then, Woodeum’s style has been dubbed “Haussmann 2.0”, after the buildings that went up as part of the 19th urban renovation of Paris by Georges-Eugène Haussmann, and which still characterise much of the city. The structure of these buildings is in wood, while the street façades are clad in stone.

To make their adoption even easier, environmentally friendly buildings must also be attractive and connect with all the senses – Pemezec

Attention to architectural style is as central to a Woodeum home as being low carbon. “We always choose to work with leading architects,” says Pemezec, naming Jean-Michel Wilmotte of Wilmotte & Associés and Jean-Marie Duthilleul, together with landscape architect Neveux Rouyer.

“To make their adoption even easier, environmentally friendly buildings must also be attractive and connect with all the senses,” says Julien.

The health benefits of living in a timber dwelling

At the start of the year, Woodeum linked up with two leading scientists ­– Dr Florence Aviat and Professor Didier Lepelletier, both based in Nantes – who had looked at over 70 studies carried out around the world on the health benefits of wood; these include lower blood pressure and cardiovascular rates, reduced stress, improved sleep and greater emotional resilience. “Wood is not just beautiful; it makes us feel better,” says Pemezec.

To create the connection with the senses – sight, smell, touch, sound – and to enhance health and wellbeing, Woodeum gives priority to green and exterior spaces­: balconies, terraces, gardens. “For our project at Pantin, for example, we calculated 20m2 of outside space for each dwelling of 60m2,” says Pemezec. 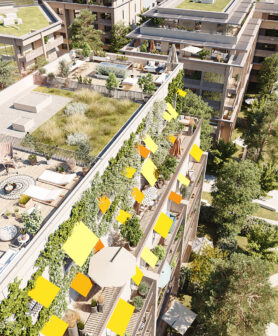 Other advantages of timber include improved air quality, less noise from neighbours and a thermal insulation 15 times better than for concrete.  Timber construction may be more expensive than concrete, but the building costs come in at the same given the faster construction times, says Pemezec.

In addition, Woodeum plants a tree in a sustainably managed forest in France for every 10m2 developed.  All wood used is certified to be from renewable sources, and the company is a founding member of the BBCA, the Association for the Development of Low-Carbon Buildings.

“We had to prove and to prove again that wood was able to meet all the building standards. This took quite a lot of time and energy,” says Pemezec about the early days of Woodeum.

Change is beginning to happen.  A new environmental regulation, RE 2020, drawn up by France’s Ministry of Ecological Transition, is due to come into effect in summer 2021.

A quarter of all buildings in France 2050 have yet to be built, foresees the ministry. The

RE 2020, which covers all new buildings, is designed to cut carbon emissions by 30% by 2030.   As the ministry says: “It’s about scaling up low-carbon buildings and in particular timber construction and bio-sourced materials.”

“The RE2020 has the ambition to rebalance the way we build and to favour low-carbon construction methods – Pemezec,” says Pemezec

With government officials, elected authorities and urban planners all behind the construction of low-carbon buildings, the focus is also now on scaling up skills across the industry, from architects, to engineers, designers and builders.

Opening the way for this, points out Pemezec, is the setting up of timber construction subsidiaries by all three of France’s big construction groups: Vinci (Arbonis), Eiffage (Eiffage Construction Bois) and Bouygues (WeWood). 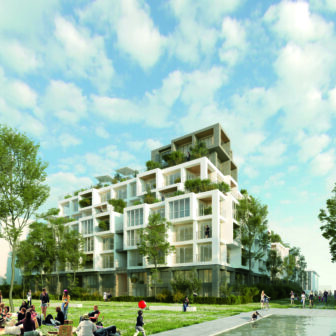 “Woodeum is a true entrepreneurial adventure; we were the pioneers in the development of low-carbon buildings when we launched in 2014,” says Pemezec.

That entrepreneurial mindset has also kept him close to the artisanal.  “It is about wanting to be close to the operations, close to the projects, to do beautiful projects each time.  We don’t work in a hyper-industrial mode. We prefer to take great care of each of our operations.”

There is an awareness that we can produce environmentally friendly buildings without renouncing aesthetics, ergonomics, well-being and comfort – Pemezec

When asked about what the entrepreneurial spirit brings to real estate, he answers: “It’s new air. When I was finishing my studies in 2004,  being an entrepreneur was less on the minds of the young generation. Now, today, entrepreneurs are held in higher consideration, while digital technology has allowed people with fewer means to develop big ideas.”

Technology plays a core role at Woodeum. Just before Covid, they introduced a VR viewings tool. “This meant that at the moment of lockdown we were ready; we had all the tools in place to sell remotely.  It worked really well,” says Pemezec, a big fan of ‘la French tech’ that is making moves in the world of construction.

“Everyone is looking to push the limits in the world of construction and this comes at just the right time – at a time when there is an awareness that we can produce environmentally friendly buildings without renouncing aesthetics, ergonomics, well-being and comfort.”

The key to being a young leader – a sense of direction

When Pemezec launched Woodeum with the two founders Guillaume Poitrinal et Philippe Zivkovic in 2014, he was 33 years old. Trained as an engineer, he had spent his career until then at Bouygues, including time in Hong Kong.

Earlier this year, he was chosen as one of the top 100 leaders for 2020 in the Choiseul Ville de demain (city of tomorrow) ranking.  The award was a way for all the entrepreneurial work to set up Woodeum being recognised, says Pemezec. “I hope it will inspire the younger generation to implement their ideas.”

When it comes to mentors – or alumni as the Choiseul laureates are called once they reach their 40s – Pemezec mentions the two co-founders of Woodeum: Guillaume Poitrinal, former CEO of Unibail-Rodamco, and Philippe Zivkovic, former chair of the executive board of BNP Paribas Real Estate.  “They both have an incredible experience in real estate, with a clear vision and a clear foresight, which is essential for the times we are going through.”

What would Pemezec say to himself as a 20 year old, at the start of his career?  “I would say that it is fundamental when choosing a profession to find and to have a sense of direction – and that your commitment to this direction is sincere.  The path is going to be long, it is going to be strewn with obstacles, and when you have this sense of direction, it will keep you motivated.

We want to continue to develop environmentally friendly buildings using timber and with a signature attention to beautiful architecture.  That is our DNA – Pemezec

“For me, my direction is about how real estate can contribute to the reduction of carbon emissions from buildings – a concrete action for the benefit of society, for the preservation of the environment and of the planet, for us and for our children. This gives me an enormous drive.

“At Woodeum, we want to continue to develop environmentally friendly buildings using timber and with a signature attention to beautiful architecture.  That is our DNA.”