Gare Maritime: setting an eco-example in mixed use

We talk with Kris Verhellen of Nextensa about the multi-award winning Gare Maritime, an eco-friendly, mixed-use project making waves beyond Brussels.
By Georgina Power on November 8, 2021 0 Comments

Belgian investor and developer Nextensa never intended to create an eco-friendly district in Brussels when it first put the mixed-use project Gare Maritime on the drawing board.

Since then, the project, part of the urban redevelopment of the Tour & Taxis neighbourhood, has become a model of circular construction for mixed-use developments.

“As the markets and the economies changed, and we progressively had new insights, our objectives evolved; and they are still evolving,” says Kris Verhellen, chief investment & development officer of Nextensa, who has been working on the redevelopment of Tour & Taxis since its inception 21 years ago. 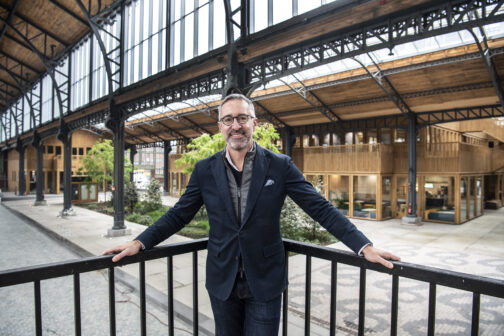 Named after the German Thurn und Taxis family, who once owned the surrounding fields, Tour & Taxis is on the other side of the canal from the historic centre of Brussels. It was once the site of an important freight hub, and home to Europe’s largest freight rail station –  Gare Maritime, a wrought-iron structure 24 metres high and 280 metres long, built in 1902-1908.

With the clock of history ticking, the site was finally abandoned, and only the architectural structures remained. As part of the redevelopment of Tour & Taxis, Nextensa repurposed the Gare Maritime to offer 45,000m2 of space: 30,000m2 of workspace, 10,000m2 of retail, 2,500m2 of food & beverage, as well as space for events.

The eco-credentials of Gare Maritime

“The most ecological aspect of the project is that we kept the original building,” says Verhellen. In addition, Gare Maritime is carbon neutral, fossil-fuel free, the site collects and recycles rainwater, and the original wood, paving stones and wrought-iron columns have all been restored, or repurposed, and reused.

It is also the world’s largest cross-laminated timber project and includes 3,000m2 of gardens, which run through the covered space. The idea was to create a new district for all the people of Brussels, as well as for visitors from further afield. “It is a long time since Brussels has had something new, interesting and of a certain size to announce,” says Verhellen.

The redevelopment has so far won ten awards, including the MIPIM Special Jury Award 2021, and has provided inspiration for real estate professionals and urbanists for eco-friendly districts around the world, as well as for the repurposing of buildings.

How the idea developed of an eco-friendly district

“Our initial idea tended towards creating a shopping centre, but the location was not right, and the conditions were not right, so we wanted to do something different,” explains Verhellen.

He recalls the day when Gare Maritime was visited by Santiago Calatrava, the architect renowned around the world for his sculptural bridges. Calatrava observed to Verhellen: “You don’t need me. Your cathedral is already there.”

“It was the building which decided on the way it was repurposed,” says Verhellen. Because it was such a huge metal structure, the ‘secular’ cathedral earned the sobriquet the ‘iron lady’.  “She’s a big structure, and she doesn’t want to do whatever you want her to do; she accepts certain things and not others,” says Verhellen.

The building decided on the way it was repurposed – Verhellen, Nextensa

Working with architect Neutelings Riedijk, Nextensa has kept the spans open of one of three central halls to retain a feeling of space. “We didn’t want to put a box within a box, as we wanted to retain the feel of the age of the building,” says Verhellen. 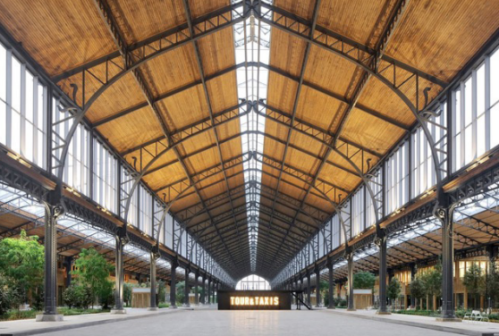 To build within the space, Nextensa used wood, with its “Meccano-like” qualities, in order to “touch” the existing roof structure, rather than boxing in the space. The idea was to create a space to resemble more of a covered city block than one huge building.

Apart from the three central halls, Gare Maritime is made up of a further four, smaller halls and 12 additional new pavilions. Other aspects determined by the original architectural features include the way the streets are interwoven across the space, and the positioning of the 20 or so entrances.

A shopping centre is engineered for you to shop. Here you come in [and]we don’t ask you to do anything – Verhellen, Nextensa

“At Gare Maritime, you come into a covered area without the sensation of being inside a building, as there’s a lot of glass, a lot of light and high ceilings. It’s another climate,” says Verhellen. As the project’s marketing spiel goes: ‘It’s a city where it never rains.’ And in Brussels it rains a lot.

“A shopping centre is engineered for you to shop. Here, you come in and you’re in a garden, and it relaxes you because we don’t ask you to do anything,” says Verhellen, who adds that often he sees people coming into the space and sitting there, catching a moment of introspection. 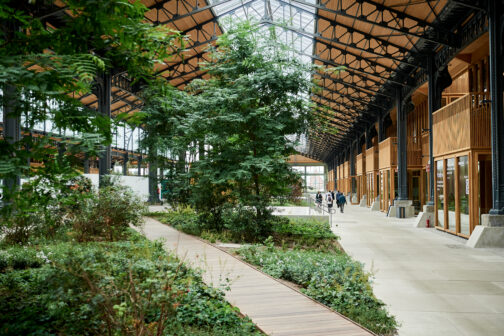 “You come in and you’re in a garden” © Nextensa

The attraction of an “atypical” building for mixed use

The workspace occupiers have signing leases for two main reasons, he explains: for the ecological credentials, so as to have a “story” for their ESG objectives; and to attract and retain younger generations of workers, looking for an “exciting place” to work.

The roster of workspace tenants includes names such as Accenture, Universal Music, BSH, Publicis and UNICEF.  Nextensa – formed this September following the merger of Extensa (where Verhellen was CEO) and Leasinvest Real Estate, both part of the Ackermans & Haaren investment group – is also moving to Gare Maritime.

The retail is “taking a bit longer”, says Verhellen, given the atypicality of the space and the delays caused by the lockdown measures. “But we are confident we will get there,” he adds.  Nextensa is looking to work with retailers “preparing for tomorrow” – ones wanting to use a retail unit to tell their brand story and to connect with customers in the event space. 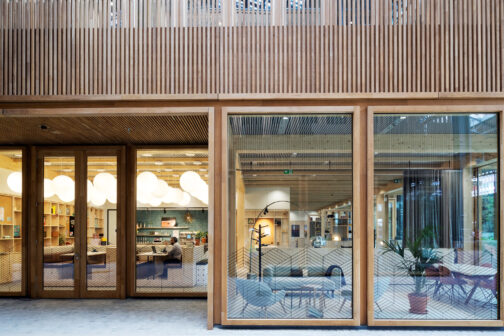 Food & beverage comes in the form of a Food Market, for which Nextensa has teamed up with Belgian brewing giant AB InBev. The Victoria Flagship Bar, named after the newly launched Victoria blond beer, is an historical tribute to Brussels and its survival following the 1695 bombardment by Louis XIV of France.

When it officially opens on 26 November, the Food Market will also be home to ten counters run by ten well-known chefs, who will reinterpret traditional dishes street style. Names released so far include several Michelin-starred chefs from Belgium, as well as rising culinary stars such as French chef-of-the-moment Adrien Cachot.

Gare Maritime is also designed to link into the surrounding neighbourhood of Tour & Taxis, and in particular the area’s other repurposed historic, early 20th century buildings, including  the Sheds (for events), the Royal Depot (workspace, retail & leisure), the Maison de la Poste (conference venue, private theatre) and the Hôtel des Douanes (planning permission for a hotel).

In all, Tour & Taxis neighbourhood is only half built, says Verhellen, with a further 1,500 residential units still to come, and the new park to be extended.

Creating a new, eco-friendly district with no state finance

“The Gare Maritime project proves that it is possible for the private sector, without any help from the authorities – without any subsidies, grants or tax breaks – to tick all the boxes to create a carbon-neutral, zero-energy project, one that is profitable,” says Verhellen.

There is nothing that we could have done that we didn’t do in terms of today’s technology, which worldwide sets an example to follow – Verhellen, Nextensa

When asked about innovation, Verhellen replies: “The entire concept is innovative, the whole process, the conservation and the ecological aspect. There is nothing that we could have done that we did not do in terms of today’s technology, which worldwide sets an example to follow.”

It is possible for the private sector, without any help from the authorities … to create a carbon neutral, zero energy project – Verhellen, Nextensa

On the technological front, Verhellen cites the Halio smart-tinting glass windows as the big innovation, installed for the first time by its producer AGC Glass at Gare Maritime. “It is good for historical buildings as no additional sunscreens are needed,” explains Verhellen. 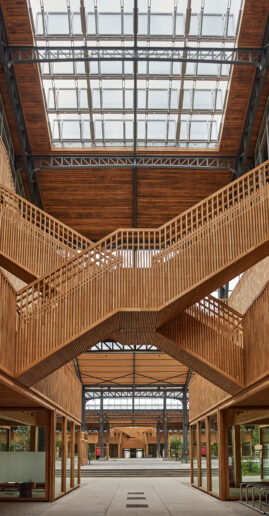 The need to be ambitious as well as innovative

When MIPIM World asked Verhellen about the unexpected challenges, he replied that all the challenges had been expected – except one.

While they were preparing for approval from the local fire authorities back in April 2019, the fire broke out at Notre-Dame de Paris, destroying the cathedral’s ancient wooden attic and causing the spire to crash through the vaults below.

“Wood construction is more fire resistant than metal as wood burns slower, but all of a sudden wood was seen as a material that can burn quite rapidly, and we had to do extra fire protection to get the signature of the local authorities,” Verhellen recalls.

Be ambitious. Look to the future … You have to be bold in what you do – Verhellen, Nextensa

And his top advice for developers looking to do such an eco-district, a model of circular construction? “Be ambitious. Look to the future. Make something for the 21st century and don’t get stuck in some late-capitalistic easy way of doing something, as the future value will not be there. You have to be bold in what you do.”

Sustainability and circular construction were key issues among the 21 perspectives collected in the latest cahier of ESSEC Business School – ‘Business Districts and Offices in the Post-Covid City’.

You may also be interested in an article written by Angelica Krystle Donati of Donati SpA on ‘Why real estate and construction can no longer afford to ignore the sustainability agenda’.