21 perspectives from the frontline of offices & business districts

The latest ‘Cahier’ from the Chair of Real Estate & Sustainable Development at ESSEC Business School is to be launched this September at MIPIM in Cannes.
By Georgina Power on September 3, 2021 0 Comments

As Europe’s real estate industry prepares to gather for the MIPIM September edition on 7-8 September in Cannes, Ingrid Nappi, professor and holder of the Teaching Chair of Real Estate & Sustainable Development, and of the Research Chair of Workplace Management at ESSEC Business School, has been putting together the finishing touches to the latest edition of the Cahier de la Chaire, the Chair’s cahier.

This eighth edition of the Cahier focuses on ‘Business Districts and Offices in the Post-Covid City’. At nearly 180 pages, and featuring 21 interviews with leaders from across Europe, as well as North America and Dubai, the Cahier is more a book of opinions and ideas rather than of notes, as the translation might suggest.

The work of the ESSEC Chair of Real Estate & Sustainable Development

The Cahier will be officially released at the MIPIM September edition, when Professor Nappi takes to the stage for the panel session Post-Pandemic City: Business Districts & Workspaces. She will  be joined by: Méka Brunel, CEO, Gecina; Assem El Alami, head of international real estate finance, Berlin Hyp AG; and Pierre-Yves Guice, CEO, Paris La Défense – all three of whom also feature in the Cahier.

Professor Nappi, who has been a research professor at ESSEC since 1994, created the Chair of Real Estate & Sustainable Development in 2002. She is based at the business school’s main campus, in the Paris suburb of Cergy. ESSEC’s three other campuses are in La Défense (Paris), Singapore and Rabat (Morocco). The school has a network of 62,000 alumni worldwide.

The office of the future will have to be sustainable, central or at least accessible by all kinds of transport – Professor Ingrid Nappi, ESSEC

Professor Ingrid Nappi writes in the foreword to the Cahier: “As well as being a place of social interaction with comfortable spaces that foster a sense of community, and thus stimulate employee productivity, the office of the future will have to be sustainable, central or at least accessible by all kinds of transport.”

She continues: “The future business district too must offer a lively environment, with all kinds of everyday services and green spaces close by.” 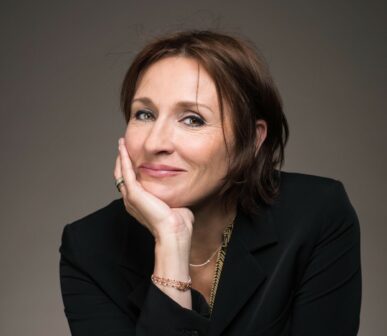 The 21 leaders interviewed for the ESSEC Cahier represent some of the worlds’ foremost developers, investors, city planners, local authorities, architects and occupiers.

We’ve been talking about three basic trends … since well before the pandemic – Méka Brunel, Gecina

It comes at a time when the definition of what makes an office building a good investment is no longer purely about ‘location, location location’.

Gecina has been talking about three major trends “since well before the pandemic”, says Méka Brunel, CEO, Gecina, in her interview for the Cahier:

Gecina’s flagship project in Paris’ 16th district, L1ve – which won the 2020 MIPIM Award for Best Futura Project – is the first time that Gecina has made the circular economy a core focus in a real estate project, adds Brunel. 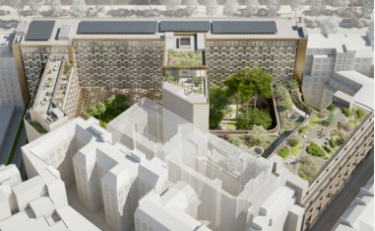 Boston Consulting Group will open its new French HQ at L1ve in 2022.

Such trends mark a huge shift for the real estate industry, and they make it an exceedingly exciting time of change for those working in real estate and urbanism.

A Haussmann-era neighbourhood is always more densely occupied than a series of high-rise towers, even the tallest – François Trausch, Allianz Real Estate

“Having a mix of urban functions will be fundamental,” says François Trausch, CEO, Allianz Real Estate, who also makes reference to the French official chosen by Emperor Napoleon III to carry out a massive urban renewal programme in 19th-century Paris, and whose work still marks most of the city of Paris.

“Haussmann was quite right to combine density and mixed uses when he redesigned Paris 150 years ago.  A Haussmann-era neighbourhood is always more densely occupied than a series of high-rise towers, even the tallest.”

We may have to expect normal business levels to be around 15% lower once the crisis is behind us … but we won’t see a uniform contraction in demand for property – Pierre-Yves Guice, Paris La Défense

Taking us back to the present moment, and talking about changes in occupier demand for offices, Pierre-Yves Guice, general manager, Paris La Défense, says in the Cahier: “We may have to expect normal business levels to be around 15% lower once the crisis is behind us, due to the effect of working from home and the difficulties experienced by certain firms. But we won’t see a uniform contraction in demand for property across the whole of France, or the Paris region, or even Europe.”

We need to triple the pace of the transformation process [towards a modernized stock of buildings]– Assem El Alami, Berlin Hyp AG

Assem El Alami of Berlin Hyp AG points out that the biggest challenge lies in the transformation of existing non-green buildings.  “By 2050 approximately 80% of the existing stock will have been built prior to 2021,” he says.

“To comply with the 2050 [Paris Climate] target, the current stock of buildings would have to undergo upgrading work at a rate of 3% per annum but in reality we’re currently only seeing 1% of the stock being modernized in the biggest EU markets, i.e. France and Germany. This means we need to triple the pace of the transformation process.”

The 21 interviews for the ESSEC Cahier on business districts and offices post-pandemic also include perspectives from: 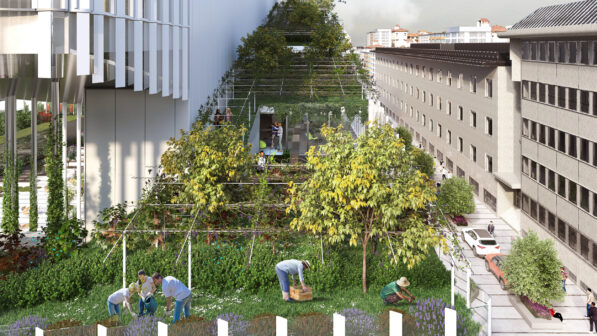 CRA- Carlo Ratti Associati is currently working on the VITAE research & office complex in Milan, where a 200 metre-long vineyard “invites everyone working or living in the area to come together”. The project is being developed by Covivio.

To give a Paris perspective, the views of Emmanuel Grégoire, deputy city mayor of Paris, and Pierre-Yves Guice of Paris La Défense are joined by those of: Antoine Derville, CEO, Colliers International France & Belgium; Patrick Ollier, president, Greater Paris Metropolis; and Jean-Luc Crochon, founder, Cro&Co Architecture, and designer of the 32-floor Trinity Tower in La Défense, which was finished mid-pandemic.

Join us at MIPIM September edition, in person in Cannes or online.