The circular built economy helps to achieve long-term income resilience. First, though, investors need to view it as a business strategy.
By Georgina Power on September 21, 2020 0 Comments

The 2020s is set to be the decade that goes circular. When economic systems are circular, they are connected, rather than following the linear path of  ‘take-make-waste’.

“A circular economy offers real estate investors a framework for achieving both environmental and social goals, and delivering better economic performance,” says Tina Paillet, chair of the Europe board of RICS, which is advising the European Commission, national governments and companies on the circular economy.

The circular economy needs to be viewed as a business strategy, not just a waste management or a design strategy ­– Tina Paillet, RICS

“The circular economy needs to be viewed as a business strategy, not just a waste management or a design strategy,” she adds. “If a critical mass of investors and construction clients embrace this message and take action, the real estate sector can deliver significant returns while reducing its negative burden on the planet.” 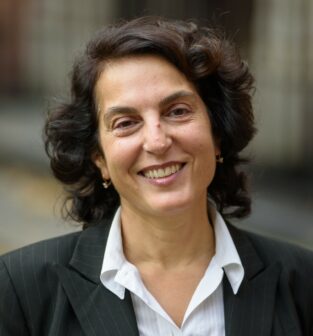 At the heart of the circular economy is how we use resources. “Our [global]economy has grown so big so fast that it is quickly depleting the very same natural capital on which it thrives,” said Martin Stuchtey, professor at Innsbruck university, who initiated the World Economic Forum Circular Economy Initiative with the Ellen MacArthur Foundation.

The growth of the circular economy as a business strategy is being felt across sectors.  For example, BlackRock – a global partner of the Ellen MacArthur Foundation, which is pioneering the circular economy – launched the equity-focussed BGF Circular Fund. This was in response to changing demand, writes the world’s largest asset manager, given that:

In the real estate sector, 70 per cent of property respondents said that they were “rarely” or “never” asked about the circular economy by clients, revealed a RICS poll held just a few months before the launch of the BGF Circular Fund in October 2019.

“The findings of the poll suggest the need to raise the awareness in the industry of the positive outcomes from the circular economy,” says Paillet.

Earlier this year, Arup and the Ellen MacArthur Foundation, in partnership with 3XN/GXN and with expert advise from RICS and JLL, released From Principles to Practices: Realising the Value of the Circular Economy in Real Estate, which follows on from the 2018 publication, First Steps towards a Circular Built Economy.

The report lays out five business models for applying circular economy principles to the real estate sector. The financial performance of each model was tested using data from ‘live’ development projects carried out across a range of different building types in five European cities (Aarhus, Amsterdam, Berlin, London and Milan).

“One of the big obstacles identified by the industry is to demonstrate value,” says Paillet.  All five circular business models in the report prove that the circular economy does produce value.

The five models, with examples, focus on:

So what next for the real estate sector? RICS suggests:

Step 3: Policy makers to be involved from the beginning on commercial-scale pilots, in order to “create the evidence base that policy makers are requesting to ensure these approaches are adopted across the market and at all levels of the value chain”.

Step 4: The deployment of evaluation tools that capture lost value.

In the EU, the European Commission is on track to launch a new Strategy for a Sustainable Built Environment in 2021, based on a tracking table that is already part of the EU Circular Economic Action Plan. This will do much to promote circular principles throughout the lifecycle of building across the region, says Paillet.

The strategy includes using Level(s), the European reporting tool for sustainable buildings, to, among other factors, integrate life-cycle assessment into public procurement and the EU sustainable finance framework.

Circolab in France takes a lead

“I believe strongly in the multi-disciplinary task force approach for building and promoting the circular economy,” says Paillet.

She points to interesting initiatives in France, where the “French government has been pushing a green agenda for the built environment for many years”.

I believe strongly in the multi-disciplinary task force approach for building and promoting the circular economy – Paillet, RICS

One such initiative is Circolab, an association of French-based real estate players committed to developing the circular economy, notably through the re-use of building materials.

“The association provides precious research and guidance to the wider sector to support the circular built economy,” says Paillet.  It is also currently developing a ‘circular economy label’ for real estate projects, due on the market by the end of 2020.

One Circolab initiative is the possible creation of a central platform for the 55 existing, often small and specialised, platforms across France for the exchange of used building materials.

The circular economy in the Netherlands

Another initiative that Paillet refers to, even though it is not focused on the built environment, is the Excess Materials Exchange in the Netherlands.

The exchange – designed to offer clients a smaller ecological footprint and greater financial value – operates as a digital matching platform.  It uses digital passports to identify materials, tracks and traces through QR codes and chips, and then values the financial, environmental and social impact of the best re-use, explains Paillet

Being circular is also not just about buildings, but also about scaling up to connect neighbourhoods and cities.  Staying in the Netherlands, the Amsterdam metropolitan area officially became the world’s first city ‘doughnut’ earlier this year with the publication of the city’s Strategy Amsterdam Circular 2020-2025.  The strategy is designed to guide the city towards becoming a circular capital by 2050.

Danish architectural practice 3XN has a sister innovation company, GXN, which specialises in circular design, as well as behaviour and digital design.  It is also the publisher of the book Building a Circular Future, which focuses on ‘disassembly’, ‘material passport’ and the ‘circular economy’.

The practice is currently working with developer and investor British Land at 2 Finsbury Avenue in London’s Broadgate on a 563,000 sq ft (52,300m2) office redevelopment. 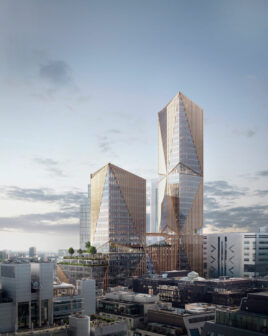 The planning submission for the project, which is due to be made this autumn, includes a 12-storey podium with a 35-storey East Tower and 20-storey West Tower.

The aim of British Land is to achieve net zero carbon in construction and operation, and a BREEAM Outstanding certification.

Kasper Guldager Jensen, founder of GXN & a senior partner of 3XN, says: “To achieve these ambitious goal, a series of forward-thinking environmental initiatives will be incorporated in the project, including the integration of circular economy design principles.

“Working alongside a team of advisers, we are exploring how to maximise design for disassembly and looking into local upcycling to enhance a sense of place and identity.  2 Finsbury Avenue will show the way forward for sustainable tall buildings everywhere.”

Part of the design – with first images released earlier this month – will map and reuse materials of the two existing 1980s buildings.

Back in Denmark, GXN is also facilitating the open source network Circle House Lab with over 100 partners involved and which aims to accelerate the transition to the circular economy in the Danish building industry.

Other projects include the 102,000m2 Quay Quarter Tower in Sydney, which incorporates two-thirds of an existing 1970s building on the site; and the award-winning Olympic House in Lausanne, designed with flexibility of use and sustainability front of mind.

A leader in the development of the circular built environment is EDGE, the sustainable real estate developer.  EDGE’s goal is to “reinvent the modern workplace as a driver for health, sustainability and innovation”.

EDGE’s approach to the circular economy straddles all five business models identified in the Ellen MacArthur Foundation/Arup report, From Principles to Practice.  The EDGE approach includes the use of:

In addition, EDGE is currently exploring the idea of having rent paid in terms of productivity and not per square metre.

Real estate directly affects people, so it’s relatively easy for us to make these changes and innovate beyond them.  There is no time to waste: the time to act is here – Coen van Oostrom, EDGE

Recently completed projects include EDGE Olympic Amsterdam: the redevelopment of an existing building with a wooden top, and reusing the original stone façade as flooring on the ground floor. 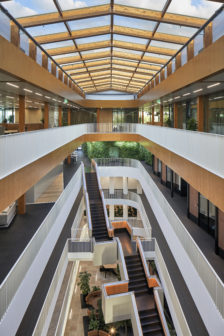 And Triodos, the multi-award winning headquarters of Triodos Bank, which EDGE completed at the end of last year, near Utrecht. 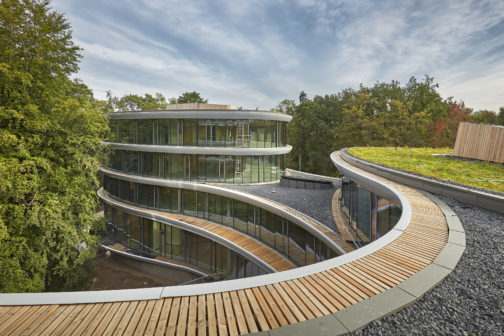 Coen van Oostrom, founder & CEO of EDGE, pointed out in an open letter to the real estate industry following the announcement of the fully outlined EU Green Deal last December:

“Most big development companies still [choose]to knock down existing buildings and construct new ones – without using circular principles.  If those same companies could find ways to redevelop, or at least harvest the materials that come from those buildings and use them in a circular way, it would already cut carbon emissions from the construction process  … Real estate directly affects people, so it’s relatively easy for us to make these changes and innovate beyond them. There is no time to waste: the time to act is here.”

For Gecina, the circular economy is one of four CSR pillars. The other three are low carbon, wellbeing and biodiversity.

The Paris-based REIT looks to integrate the circular economy throughout the whole life cycle of its projects.  Its portfolio includes 1.6m square metres of offices in the Paris region, as well as a residential portfolio, and €3.8bn of pipeline projects.

The circular initiatives of Gecina include:

For its L1ve project in Paris, Gecina is maintaining the existing concrete structure to turn the original Peugeot car showroom, just off the Champs-Elysées, into open office space.

The project has been designed as part of an ambitious circular economy approach saving the equivalent of 394 tons of CO2 emissions by reusing 81 tons of materials.

L1ve aims to achieve the highest level of certification from HQE Rénovation, which has developed specific criteria for the circular economy, as well as WELL, LEED, Wiredscore and Biodivercity.

You may be interested in reading the MIPIM World Blog article, The end of the wrecking ball: the start of the circular economy, by Sabine Desnault, executive director R&D, innovation & CSR, at Gecina.