Nearly seven years after China laid the cornerstone of its Belt & Road Initiative, over 125 countries have signed BRI-related agreements with a Chinese institution or company. What does this mean for Europe’s real estate sector?
By Georgina Power on January 20, 2020 0 Comments

China’s modern-day Silk Road, the Belt & Road Initiative (BRI), is made up of many belts and many roads – highways, rail lines and sea routes.  It is the world’s most ambitious project promoting global connectivity, both through developing physical and digital infrastructure.

How does this affect the real estate sector? As Terence Tang, Managing Director, Capital Markets Asia, Colliers International Singapore, said at MIPIM 2019: “Real estate values can only grow if there are improvements in infrastructure.”

Is the BRI about China’s foreign policy and geopolitical ambitions?  In part, yes, this cannot be denied. What about the fall-out from the US-China trade tensions? Despite the headlines of a limited agreement reached between the two nations at the end of last year, “European capitals, and more urgently European companies doing business in or with China, face an increasingly complex environment,” says Control Risks :

“The Chinese government sets the objective and the strategy, and then they expect the Chinese companies to follow the direction that they set” – Terence Tang, Colliers

Neither is the initiative purely in the hands of the Chinese state. Tang explained to the audience attending the BRI session at MIPIM: “Unlike many other governments, the Chinese government sets the objective and the strategy, and then they expect the Chinese companies to follow the direction that they set.”

Thomas S Eder, Research Associate at the Mercator Institute for China Studies at Berlin’s Humboldt University, which tracks the physical and digital infrastructural networks of the BRI, points out that Chinese companies are the main beneficiaries of BRI projects, with European construction companies having lost out on several major infrastructure projects, including the Peljesc Bridge in Croatia.

“Projects funded by multilateral institutions such as the EIB and the EBRD offer the best opportunities” – Thomas S Eder, Mercator Institute for China Studies

“European supply firms and service companies have benefited the most,” says Eder, with projects funded by multilateral institutions such as the European Investment Bank (EIB) and the European Bank for Reconstruction & Development (EBRD) offering the best opportunities. 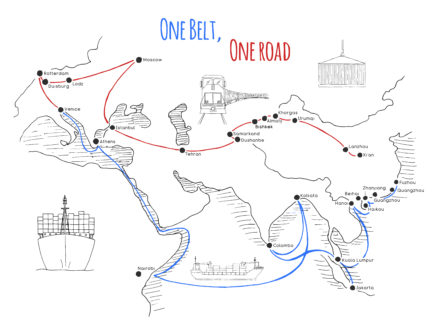 The BRI: a wake-up call for Europe

Whatever the political objectives, there is no doubt that China’s BRI is enhancing the connectivity between economies and communities globally – especially between China and Africa and Southeast Asia, and also between Asia and Europe.

Nearly half of all EU member states have signed BRI Memorandums of Understanding with China, predominantly in Central and Eastern Europe, but also Greece, Italy and Portugal.

When Italy became the first G7 country to join the BRI in March 2019, alarm bells sounded among EU institutions and the Financial Times published an editorial on how ‘The EU must match China’s drive to invest’.

The EU-China Connectivity Platform, set up in 2015, was designed to enhance synergies between the EU’s approach to connectivity, mainly through the Trans-European Transport Network (TEN-T) and the BRI. In April 2019, the platform announced it would carry out a joint study on the sustainability (environmental, financial, fiscal and social) of the rail corridors between China and Europe.

How the BRI is opening up Europe

The Beijing-Hamburg Container Express, launched in 2008, was the first Asia-Europe rail link.   Since then, according to 2018 figures from the official Xinhua news agency, 48 Chinese cities have launched 65 freight train routes reaching 14 countries and more than 40 cities in Europe, including the longest freight train route in the world, between Yiwu and Madrid.

City hubs have emerged and expanded like “milestones” along the routes, as Alexander Missoffe, Executive Director, Greater Paris Investment Agency, described at the MIPIM session on the BRI.  These new routes have at least halved the journey time taken for goods to reach Europe from China.

In Germany’s Ruhr valley, Duisburg is by far the most important hub in Europe for transcontinental trains from China. The city is linked to around 35 cities and provinces in China and some 100 Chinese companies have set up in what was once the heart of Germany’s rust belt.

Second to Duisburg as a rail logistics hub for China-Europe trade is Łódź – a former textile city slap bang in the middle of Poland, says the Mercator Institute for China Studies.

In Athens, China’s COSCO Shipping bought Piraeus port in 2016, and now, with the pro-business New Democracy party in power in Greece, the company has announced plans to invest €600mn to develop the port into a crucial hub between Europe and Asia.

The approach by Paris and Marseilles to the BRI

At MIPIM, Missoffe said that the Greater Paris Investment Agency was taking a project-by-project approach to the BRI. “We put projects on the Belt & Road portal to capture finance and investment,” he told the audience. He added that the dialogue was working well, especially with regards to infrastructural and logistics projects around Paris Charles de Gaulle Airport. The approach of Paris was to make a “global city that will be so powerful, magnetic and attractive that the roads will come to Paris”, he added.

“You are global as long as you are a hub of something, and Marseille is the hub that links Continental Europe with Africa” – Hugues Parant, CEO of Marseilles’ Euroméditerranée urban renewal project

With Africa set to see some of the world’s strongest economic and population growth, this puts Marseilles in a strategic position. “We have totally refurbished the centre of Marseilles over the last 20 years,” he said, with further projects under way.

“For Greater Paris, the BRI is a way to make connections with other locations and with other institution around the world” – Alexandre Missoffe, the Greater Paris Investment Agency

Being part of the BRI is not only about attracting investment,  said Missoffe. “It’s also about investing in knowledge, innovation, new technology and in minds.”

Academic Peter Frankopan, author of The New Silk Roads, writes: “The Silk Roads were – and still are – the world’s central nervous system.”

Read the interview with Adam Rush, Cushman & Wakefield’s Regional Director, Consulting, in Greater China, as to how the BRI is affecting the global logistics market.