Africa bounces back: the potential of this resource-rich continent

Africa is rising. It is home to the world’s fastest-growing cities, with Nigeria alone estimated to add 189 million people to its urban areas by 2050. All the while, this resource-rich continent is under the gaze of the world’s superpowers, most notably China.

The mistake that many people make is that they see Africa as one, whereas in fact, as Charles Hecker, Senior Partner, Control Risks, the global specialist risk consultancy, says: the “economies, political systems, demographics and aspirations … vary substantially from region to region and then from country to country.”

Global Real Estate Experts caught up with Charles, together with his colleague Mark Whyte, Senior Partner:

GRE: Africa is the world’s second large continent. What is the potential of the region as a global economic player?

Charles Hecker, Senior Partner, Control Risks: Recent years have been economically and politically turbulent for sub-Saharan Africa. Growth in the region fell to 1.4% in 2016 – its lowest rate since the early 1990s – and remained at a relatively low 2.7% in 2017. But the world’s second largest continent is bouncing back. Forecasts show gradually improving growth over the next few years, in line with the steady, if fragile, improvement in the global economy. Other economic indicators, such as foreign direct investment and exchange rates, have also shown signs of improvement.

“The world’s second largest continent is bouncing back”

This recovery is not being driven by the usual suspects. On the contrary, the IMF recently warned that the poor performance of the continent’s traditional giants – Nigeria, South Africa and Angola – was holding back Africa’s economy. This is reflected in Control Risks’ and Oxford Economics’ semi-annual Africa Risk-Reward Index, last published in November 2018 (see below). In that report, Nigeria, South Africa and Angola all saw only minor improvements since the preceding index was published.

The dramatic political changes in South Africa and Angola that were highlighted in that edition are arguably laying an important foundation for longer-term growth.

GRE: What are the main challenges of operating in Africa?

Participants in Africa’s urban boom will face a range of hazards and threats – societal, technological, political and security:

Managing risks is central to the success of infrastructure projects. This is the case not only in emerging markets where, along with growing opportunities to invest in infrastructure, investors and developers face elevated risks to their projects, but also in established markets, where unforeseen events can derail an infrastructure project, despite what may seem a familiar and reliable business environment.

GRE: What do you need to enter into the African market… a local partner, a sense of humour?

CH: When all else fails (and arguably before that) a sense of humour is essential. Beyond that, requirements for local partnership will vary from country to country in Africa.

“Careful selection of a local partner can lead to a healthy and productive relationship, but the emphasis is on careful”

Some countries have quite strong local content laws, others less so. The risk comes from thinking that having a local partner solves an international investor’s problems. It doesn’t. Careful selection of a local partner can lead to a healthy and productive relationship, but the emphasis is on careful.

In Africa and around the world, extensive due diligence is required to ensure that your local partner’s relationship with key in-country stakeholders is transparent, and not a source of legal, financial, political or reputational liability. Beyond the question of partnerships, we would say that careful due diligence on both the national (macro) and project (micro) levels are critical to successful investments in Africa.

GRE: What is your top tip for people/companies new to operating in the region?

CH: Our top tip is to take a view which is as holistic as possible on risk to market entry. If you’re new to investment in Africa, think about a wide spectrum of threats, including political risk, regulatory risk, local business practices that may expose you to FCPA liabilities, shortcomings in state capacity and the lack of well-prepared projects.

If that all sounds excessively negative, it need not. Openly acknowledging and effectively managing risks in Africa is the only way to deliver real, tangible value that protects the interests for all stakeholders, from investors through to end-users.

GRE: To what extent do you think the world has a grim view of the African continent, which is not the reality?

CH: For quite some time, the narrative about Africa has been one of ‘Africa rising’. The grim views appear when the investment community feels that the promise has failed to materialise. As with all markets, looking at “Africa” is not always a very helpful approach. The economies, political systems, demographics and aspirations on the continent vary substantially from region to region and then from country to country.

This may seem obvious – and it is something we take for granted when looking at other markets – but it is something that often gets overlooked in discussions of Africa. The real view of what’s happening on the continent – including stories and investment potential that are genuinely exciting – is something best seen up close.

The Africa Risk-Reward Index, a report produced by Control Risks and its partner Oxford Economics, highlights how some of Africa’s largest economies are outshone by smaller rivals.

The index plots each country’s performance relative to their peers on the continent. The position of each country is defined by its risk and reward score; the size of its bubble represents the size of the country’s GDP. 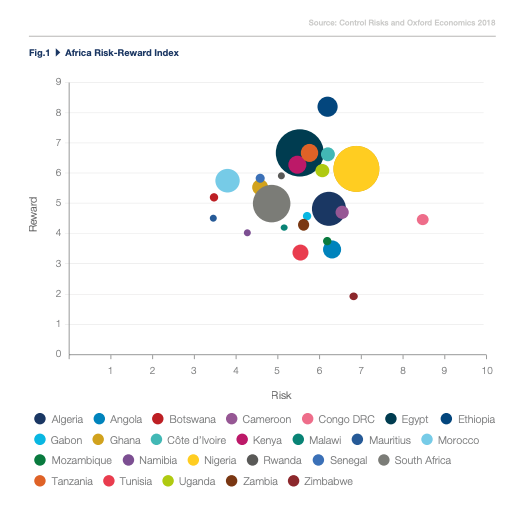 Further details on the methodology for calculating each country’s scores are available separately. The Africa Risk-Reward Index should not replace an in-depth analysis tailored to your sector and company. Please contact us to discuss at: enquiries@controlrisks.com or africa@oxfordeconomics.com.

A few facts about Africa…

Charles Hecker is the Keynote Speaker at the MIPIM 2019 session ‘Africa: Growth & Investments‘ on Thursday 14 March at 10:00-10.45 in the Beige Room. The session is part of this year’s Africa Forum.