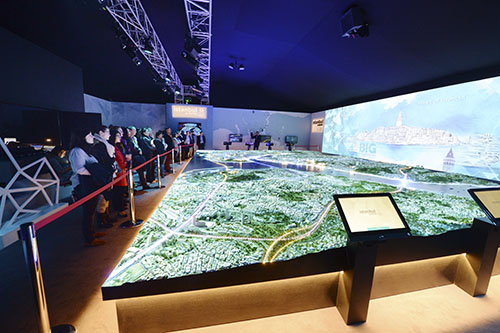 Turkey lights up at MIPIM

Turkey came back to MIPIM for the third year running in a big way, with a tent, a model, and a pavilion.
By Graham Parker on March 23, 2015 0 Comments

In getting its message across, Turkey seems to have reached the watershed between introspective caution and outward-looking ambition. And as demonstrated at MIPIM has stepped confidently across from one to the other.

Turkey is now moving on to the international stage. GDP growth rate is 5.6% a year over recent years. This is the second highest in the world after China. The country’s presence at MIPIM this year confirmed both its increasing financial muscle and its widening world view.

The delegation was led by the ICoC, the Istanbul Chamber of Commerce. This organisation is one of the largest in the world with 375,000 member companies. 60,000 of these operate in construction and real estate. An indication of Istanbul’s role as a world trading hub is that 25,000 ICoC member companies are actually foreign.

The focus of the Istanbul expedition to MIPIM, and one of the highlights of this year’s show, was a 96 sq m model of the city. This occupied much of the Istanbul Tent outside the Palais. To work, and avoid being just lumpy maps, models need a wow factor. The 1:1000 scale model had that. We saw boats and ferries shuttling across the Bosphorus. We saw moving lights simulating the passage of trains and automobiles along the major rail and road routes, current and under construction. The famous historic sites were readily identifiable. But most relevant of all, the latest infrastructure projects were marked out and highlighted, as were the major real estate development projects.

Launching the model, Ibrahim Caglar, president of the ICoC, said it was “Created especially for MIPIM and is designed to showcase some of the city’s monumental construction projects currently underway. These include Kanal Istanbul, Istanbul’s Third Airport, The Third Bridge joining Asia and Europe, the Marmaray undersea rail tunnel, the Eurasia Tunnel and the Istanbul International Finance Centre.”

While much of the Turkish emphasis was on attention-grabbing infrastructure projects, there was also a subsidiary focus on urban regeneration and rebuilding. The urban regeneration aspects were focused on two of Istanbul’s historic suburbs, Beyoglu and Piyalepasa. These are much more than suburbs and nowadays are centres in their own right as the old city remains contained within the historic museum heartland, and the new business and retail urban centres march and expand along both sides of the Bosphorus. With both centres the key is how to keep the old yet blend in the new.

Clearly Istanbul is not the whole Turkish story. There were big development stories from Ankara the capital; from Antalya in the south, and from Balikesir, capital of the eponymous province inland from the Aegean and the Marmara seas.

Nor was Istanbul the whole story at MIPIM. Inside the Palais was the Turkish Pavilion which hosted organisations from Ankara, Antalya, three supporting ministries, and a collection of private developers all promoting mega-projects of the first rank.

The Istanbul Chamber of Commerce in conjunction with Beyoglu Municipality hosted and sponsored the MIPIM opening night welcome party.