Urban mobility is on the cusp of change, the like of which has not been seen since the widespread adoption of the private car in the post-war period. Rapidly developing technology and the urgent need to decarbonise transport are combining to create a situation where, within less than a decade, urban transport could become virtually unrecognisable.

Starting today, there exists the possibility of creating cities that are both greener and easier to navigate, leading to environmental, social and economic benefits. However, the full potential of new technology will only be realised if some significant hurdles can be overcome. The question is: can city and industry leaders combine their efforts to realise the benefits on offer?

While the potential of some technologies requires a bit of imagination, others are already proving their worth. In Scotland, for instance, the benefits of deploying transport systems, from buses to ferries, powered by sustainably produced hydrogen fuel cells are already being felt. “At this moment you’ve got Aberdeen, which has the largest fuel-cell bus infrastructure in Europe,” says Fiona Goodenough, hydrogen project manager at the Scottish Cities Alliance, adding that the rollout in Dundee will begin soon. “The idea is to fully commercialise fuel-cell buses by 2020 — so no more subsidies from the government or councils.”

While the greening of cities’ established public-transport networks is a priority, ending individual citizens’ addiction to the internal combustion engine is perhaps of even greater importance. The take-up of electric vehicles (EVs) is increasing, albeit that different territories are achieving wildly different levels of saturation. In Scandinavia, for instance, around a third of new car sales are EVs, while the UK will be doing well to hit 9% this year.

The big issue in most places is that the charging infrastructure for EVs simply isn’t good enough. To take just one example, Shell now has 10 charging points installed at its service stations in the UK, which is not many when you consider that the petroleum giant has 10,000 stations across the country. 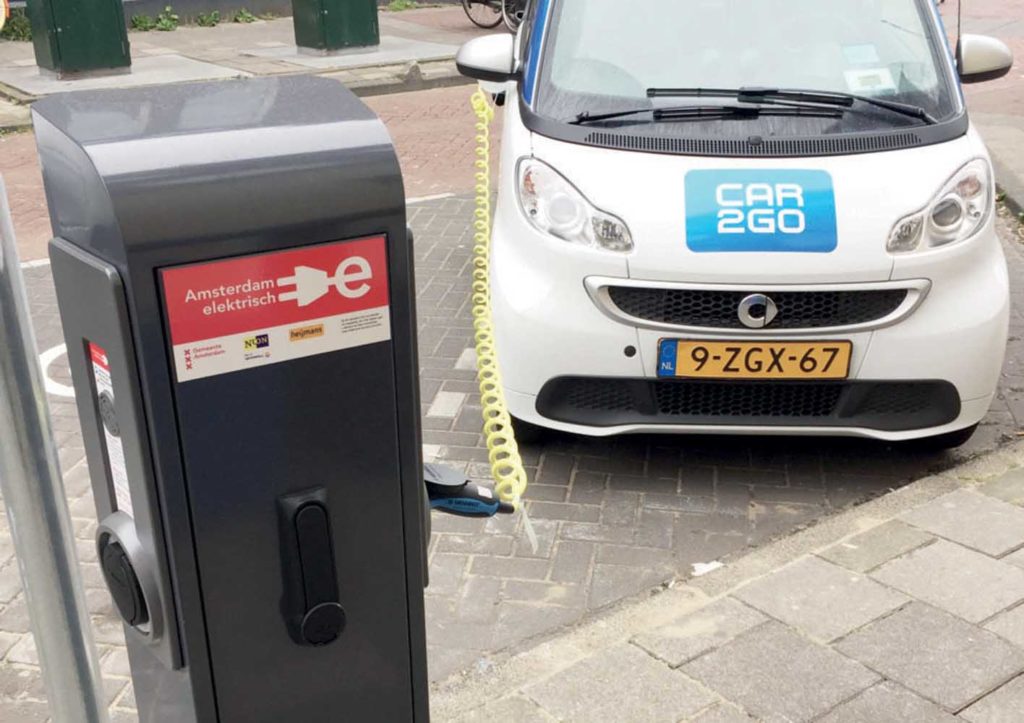 A charging station in forward-thinking Amsterdam

“In most parts of Europe, the charging infrastructure simply isn’t there,” says Mark Charlton, head of research and forecasting at Colliers International. “It’s one of the areas that is holding back real penetration of electric vehicles. People are nervous about running out of juice.”

It isn’t just the responsibility of the big energy firms, however. Government too needs to play its part. “It’s down to local authorities to install on-street charging points,” says Daniel Thorpe, research analyst at international property consultancy JLL. “We’re seeing lot of off-street charge points in shopping centres and so on, but we’re not seeing them on streets. That’s a particular issue in large cities, where people don’t have garages or the ability to install their own charging points.”

In the short term, encouraging people to make the move from petrol-powered vehicles to EVs is important. But longer term, it is the potential to combine the environmental benefits of EVs with advances in driverless technologies and the advent of shared systems that is the most significant.

The ideal scenario, as envisioned by a raft of reports from consultancies and think tanks around the world, is that cities move towards transport systems supported by fleets of autonomous EVs. Such a model would, it has been demonstrated, dramatically cut congestion and all but eliminate carbon emissions from the roads.

For instance, a 2015 report from Paris-based International Transport Forum (ITF) based on a modelling exercise in Lisbon, Portugal, found that integrating a fleet of shared autonomous vehicles could make 90% of regular cars obsolete. A similar study published in late 2017 and concentrating on Helsinki, Finland, reached similar conclusions.

The findings of such research have got some people very excited. “Over the next 25 years, say, there will be a transition from 0% to 100% [autonomous vehicles],” says David Levinson, professor of transport engineering at the University of Sydney’s School of Civil Engineering. “But eventually, just as there are essentially no horses in cities — aside from a few police horses — there will be no human-driven vehicles.”

David Levinson: “Eventually, just as there are essentially no horses in cities — aside from a few police horses — there will be no human-driven vehicles”

In addition to the obvious environmental benefits, such infrastructure could also massively improve health and safety on our streets — although, of course, the technology is at present unproven. “We humans are pretty shitty drivers so, if you have a system that performs better than humans, then you will see a reduction in crashes and fatalities,” says Philippe Crist, project manager at the ITF. “Approximately 90% of vehicle crashes involve some element of human error. By removing that human error, you could reduce that to close to zero.” He admits that this is probably an optimistic assumption, “because the sorts of crash scenarios we see with humans can be dealt with by algorithms”. However, he adds: “New crash situations will present themselves.”

Unfortunately, making fleets of shared autonomous vehicles (AVs) a reality is a pretty daunting task. The planning system is one obstacle. In an ideal world, local authorities in urban areas would be planning for a shared, autonomous future. But that looks unlikely to happen any time soon, according to Steve Norris, head of retail and town-centre consultancy at Carter Jonas.

“The planning system is very slow to respond to these wider innovations, whether it’s big data or driverless cars,” he says. “I think it’s on the agenda, but people don’t really understand it. With driverless cars, we’re going to have to rethink our whole approach to transport across cities and regions.”

Certainly, if fleets of AVs are to be introduced, it will require the state to play a major role. “It’s going to be messy unless government gets involved, defining locations and putting the regulations in place to actually impose this sort of thing,” says Alan Harbinson, managing director (cities) at international consultancy BuroHappold Engineering. “It will take a brave city to bite the bullet, but then you will get this domino effect, where success in one location tempts people to do the same in other cities.”

It is clear the road to greener, less congested cities isn’t without obstacles. But given the rewards on offer, it’s a journey worth serious consideration.