Located at the heart of England, the West Midlands is on the path to becoming a centre for R&D into the built environment. It also has an active residential sector.
By Georgina Power on October 26, 2020 0 Comments

The West Midlands has a “winning formula”, said Andy Street, mayor of the West Midlands Combined Authority, in a MIPIM Connect session on this region, that is home to nearly three million people.  “We must not be put of course,” he added.

The West Midlands is emerging as a centre not only for the auto industry – becoming a R&D leader into hydrogen and electric vehicles – but also, among other sectors, for the built environment and, in particular, for modern methods of construction (MMC), said Street.

The “winning formula” is about creating a “cluster magnet” to help innovation grow and to tap investment. The latest addition to the MMC “cluster” is the £17.5m National Brownfield Institute (NBI) in Wolverhampton, for which the planning application was submitted earlier this month. 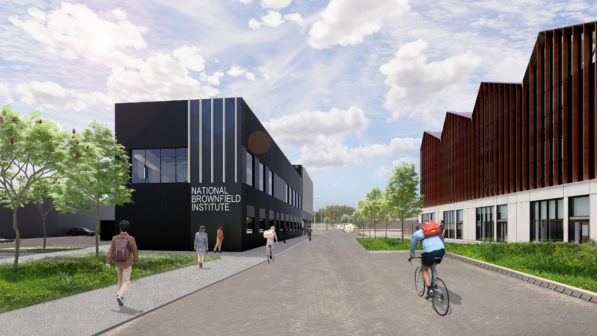 The National Brownfield Institute in Wolverhampton: a planning application has just been made.

The West Midlands Combined Authority is made up of seven constituent authorities – Birmingham, Coventry, Dudley, Sandwell, Solihull, Walsall and Wolverhampton – and three local enterprise partnerships. The authority’s focus is on the devolution of power from national UK government to the region.

Birmingham is the largest metropolitan area in the UK outside London. The city also has one of the youngest populations in Europe, with nearly 40% of the population under 25.

“Youth and diversity is making a genuine difference to us. We would not be hosting Coventry City of Culture [set for 2021]or the Commonwealth Games [2022] if it were not for that,” said Street in the MIPIM Connect session.

West Midlands as a centre for construction technology

“There is a huge opportunity to expand our capabilities in manufacturing for construction to deliver the infrastructure we need,” said Street.

“It is about how public land is disposed of, the skills that are there, and it’s about investment in at-scale production. We want to make a real expertise in this, building on our manufacturing heritage.”

We want to make a real expertise in [manufacturing for construction], building on our manufacturing heritage – Andy Street, West Midlands Combined Authority

North-west of Birmingham, the University of Wolverhampton – one of 11 universities in the West Midlands – is well under way with the £100m brownfield construction of a super campus on the site of the old Grade II-listed Springfield Brewery.

The campus lays the foundation for the delivery of a “national centre for sustainable construction and the circular economy”, said the university.  It includes, among other institutes and colleges, not only the NBI, which will focus on R&D into new construction methods and ways of regenerating contaminated land, but also the £28m School of Architecture & the Built Environment, which opened this autumn. 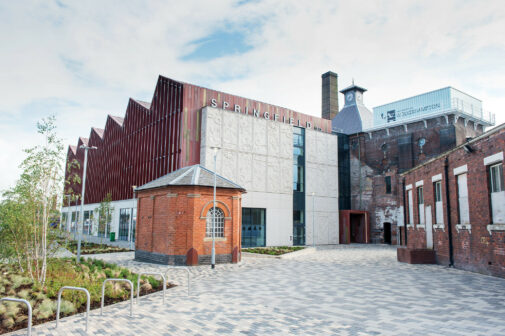 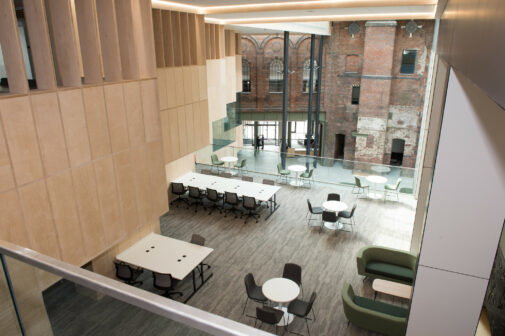 The School of Architecture & the Built Environment at University of Wolverhampton

South-east of Birmingham, in Coventry, and as part of the UK’s Construction Innovation Hub, the Manufacturing Technology Centre works in partnership with the Building Research Establishment (BRE) in Waterford and the Centre for Digital Built Britain at the University of Cambridge.

“We are seeing a much greater appetite for collaboration, and through collaboration innovation is easier to drive, and as we develop these approaches you get economies of scale.  All this drives huge opportunities for the region,” said Street.

“If we have regional clusters we can then create a national network with a more significant impact across the whole country. We want to drive quality and value, and put these [factors]above cost and maximising return.”

A big boost for the region was the green light earlier this year by the UK government on the £106bn High Speed 2 rail project, which will halve the journey time between London and Birmingham, to 50 minutes.

The roll-out of HS2 includes the building of two new rail stations in the West Midlands: the Birmingham Interchange in Solihull, near the international airport, and a new terminus at Curzon Street, on the edge of Birmingham city centre.

Curzon Street is a 15-minute walk from the Innovation Birmingham digital campus in the city’s Knowledge Quarter. The scheme is owned by Bruntwood SciTech, a joint venture between commercial property specialist Bruntwood and Legal & General.

This April, the city council gave the go-ahead for Enterprise Wharf, a new £30m centre at the Innovation Birmingham campus. And earlier this month Bruntwood SciTech, advised by Avison Young, was appointed as development partner for the £210m Birmingham Health Innovation Campus. Life science is another sector “quietly growing” in the region, as Street puts it.

Housing as a spur for growth

This September, Birmingham was the top city performer out of ten cities in the UK for residential, according to the UK Cities Recovery Index by real estate advisor Avison Young, which earlier this year was appointed by Birmingham City Council  to lead a review of the council’s commercial investment property portfolio.

Birmingham’s strong score for residential activity in September and into October has been driven by hitting greater transaction levels than pre-[Covid] lockdown – Mark Birks, Avison Young 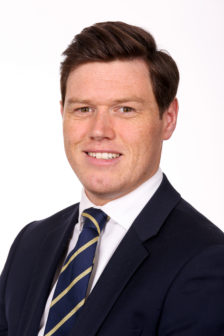 Birks added that the “strong market sentiment” showed that the residential sector in Birmingham was underpinned by “sound fundamental economic principles”, and with a high volume of enquiries from new buyers.

Prominent mixed-use schemes in the city include the £1.5bn Smithfield Markets development, where Lendlease is the City Council’s preferred development partner.  The regeneration scheme includes over 2,000 new homes.

Manchester developer Urban Splash is now on its second residential scheme in Birmingham after refurbishing the iconic Rotunda building.

Working with regeneration group Places for People, Urban Splash is creating Port Loop, a new, canal-side neighbourhood with over 1,000 homes, a community hub, office space, a new leisure centre with swimming pool and public park.  Housing is to buy, rent or purchase through shared ownership. 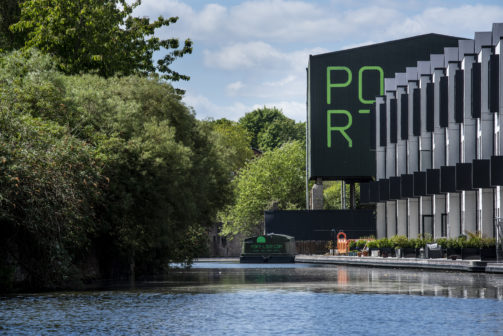 The homes are created offsite, at the House by Urban Splash factory in the East Midlands. This follows last year’s partnership with Japan’s MMC pioneer, Seiko House, and Homes England, the UK government housing accelerator, to build modular homes.   Currently only 10% of new homes in the UK are modular.

“The market looks good for the right product, with a lot of demand for quality homes with outdoor space,” said Nathan Cornish, group director of Urban Splash, speaking on the MIPIM Connect session.  “We’ve always found the Birmingham market very receptive to our design-lead approach to development.” 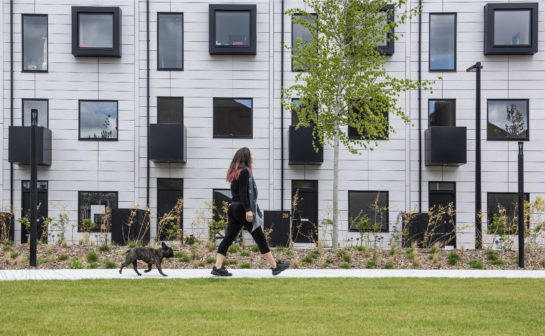 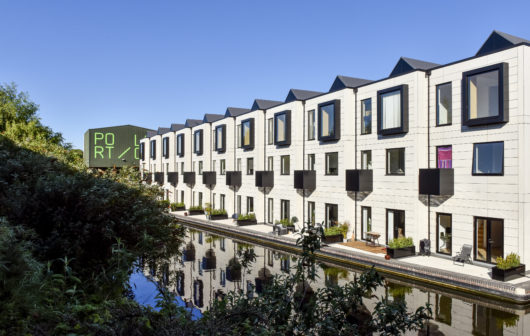 Making town & city centres attractive places to get to

Mobility is a key topic in cities. Wrapping up the webinar, Cornish underlined the importance of making town and city centres attractive as places to be and places to get to.

Asked about the five years ahead, he answered: “Hopefully a thing of the past is the idea that we all get into our cars at eight o’clock in the morning and sit in the traffic for an hour, when it would take 15 minutes if we left at half past nine.”

Cornish suggested that city authorities should “bravely” embrace the likes of cycling and e-scooters, and to only allow electric vehicles in city centres. “If there were a double lane to the city,” he suggested, “why not make one of them a ‘green lung’ so that [cyclists]can feel they can get into the city centre safely?”

If an outcome of Covid-19 was that “we looked back after ten years and said, that was when we changed, we got out of our cars and got onto our bikes, that would be incredibly positive”, he added.

Join the conversation at MIPIM 2021