Paris: a new urban model for a post-Covid world, under Hidalgo’s “visionary” leadership

Anne Hidalgo has been named as one of the world’s 100 most influential people. As the mayor of Paris, she is carving out a new model of city governance.
By Georgina Power on October 19, 2020 0 Comments

Less than three months after Anne Hidalgo was re-elected Mayor of Paris for a second mandate, she took to the stage at the MIPIM Urban Forum September 16, 2020, joined by Virginia Raggi, the Mayor of Rome, to talk about revisiting city governance models.

“We have to accelerate the transformation of our cities,” said Hidalgo, who leads a city referred to by the moderator as an “innovation lab of urbanism” – a city which is twinned with Rome.

The coronavirus crisis has shown that we need a different model, we need different solutions – Anne Hidalgo

The view from Rome of a new model

Speaking via video link from Rome, Raggi said: “The crisis has affected the inner DNA of our societies.  Cities are the places where people live together, where they work, study, create plans, meet, and develop their creativity and their future.”

Like Hidalgo, Raggi said that the real challenge of our time was social resilience.  “Resilience can be defined by the three ‘Rs’,” she said.  By the initial of ‘Rome’, and also by the ‘Rs’ of “reinvesting, regenerating and restarting [our communities]”.

“We have to lead and look forward, and point to the place where we want to go, and we have to do it all together” ­– Virginia Raggi, mayor of Rome

“Change is the basis of life … the pandemic has been an accelerator of change but we don’t have to fear it; we have to lead and look forward, and point to the place where we want to go, and we have to do it all together,” said the mayor of Rome.

Hidalgo has always looked beyond the walls of Paris and the surrounding Greater Paris metropolis for inspiration to shape her city’s long-term vision and strategy.  Between 2016 and 2019, she was chair of the C40 Cities, the climate leadership group formed by the world’s megacities.

The week after MIPIM Urban Forum closed its doors, Time Magazine featured Hidalgo as one of the world’s 100 most influential people of 2020.

Ann Hidalgo is “the kind of leader who demonstrates how local action can solve the climate crisis” – Al Gore, former US vice president

Writing in Time, Al Gore, former vice president of the US, and founder & chairman of the Climate Reality Project, referred to Hidalgo as a “visionary leader” and “the kind of leader who demonstrates how local action can solve the climate crisis”.

The 15-minute city – the “de-concentration” of power to citizens

To make our cities more socially resilient, we need to anticipate crises and to do this we need a population who is “informed, engaged and involved”, said Hidalgo at the MIPIM Urban Forum.

At the core of this citizen engagement for the Paris authorities is the concept of the 15-minute city – a concept that they have been working on with smart city expert Professor Carlos Moreno.

This is a micro-level city where inhabitants can find all the services they need within 15 minutes; it is about the “de-concentration” of power to be nearer the citizens, said Hidalgo.

Mobility strategies focus on walking and cycling, improving air quality and increasing wellbeing.  The city of Paris – a city of 2.8m inhabitants – has already opened 45km of ‘corona lanes’ for cyclists, with a further 15km on the way. 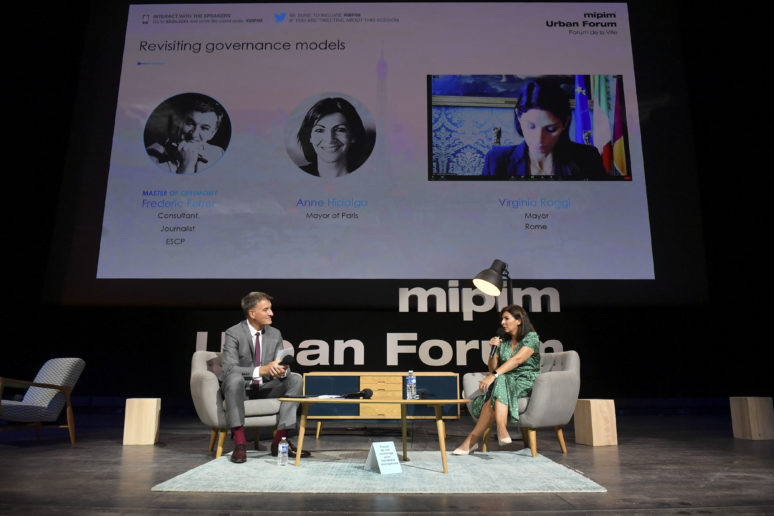 Re-inventing Paris – a city of ‘co-construction’

Réinventer Paris (Reinventing Paris) is a city initiative to revamp disused buildings and sites belonging to the City of Paris through a call for innovative urban projects.

The initiative allows for “co-construction”, said Hidalgo, with the bringing together of various players, including real estate developers, the housing sector and local associations, to work on proposals.

Around half of the 20 projects selected for the latest, second edition, announced early 2019, were proposed by developers, and the remainder by architects, community groups or end users.

The city then choses the ‘best’ projects, and either sells or rents the sites to the winning bidders.  ‘Best’ can be summed up by the Le Monde headline quoting Emmanuel Grégoire, first deputy mayor for the City of Paris in charge of urbanism: “Urbanism in Paris: the reign of the car, of tarmac and concrete is finished.”

Making the City of Light green

Hidalgo cited La Ferme du Rail, in the 19th district, as an example of a Réinventer Paris project that had already been inaugurated.

The project is made up of social and student housing, a training centre, a restaurant and various farming and horticultural activities, and is based on the principles of the circular economy – a key principle underpinning Paris’ new city model.

As mayor of the city which gave its name to the 2015 Paris Agreement on climate change, Hidalgo also talked about the revision of the Local Urbanism Plan to make it the first bio-climatic plan of its kind in France. This is “truly integrating the issue of adapting the city to climate change”, said Hidalgo.

In the weeks after the MIPIM Urban Forum, the town hall also announced the release of a “manifesto for a new Parisian aesthetic”, which would “apply to all future regeneration projects as well new urban real estate projects as of September 2021”, quoted Le Monde, citing the city authority’s road map.

The first step of this new manifesto would be for a “call for ideas” about “the landscaping and greening of future districts”.

As Hidalgo said at the MIPIM Urban Forum: “The big lesson that we can take from the coronavirus crisis is that we must not leave the objectives of ecological transformation to one side. They are totally linked, and they will allow us to be even more resilient.”

The attraction of socially diverse cities

“If a city is purely a place for the richest people, who can afford private services and private housing, it would lose its attraction,” Hidalgo told the MIPIM audience.  “A city attracts people because it is diverse.”

Social housing represents 23% of housing in Paris, up from 10% in 2001.  “These are not just figures. This means there are about 600,000 people who have access to affordable housing and who can live in Paris,” she said.

If a city is purely a place for the richest people, who can afford private services and private housing, it would lose its attraction – Hidalgo

During Hidalgo’s first term, the city worked with the real estate sector to transform 350,000 m2 of office space into housing.

The plan is to do more, she explained, working with the real estate sector and with Apur, the region’s urbanism agency, and the regional authorities.

“We need to work with the real estate sector to see how they can be incentivised to take that path,” she added. 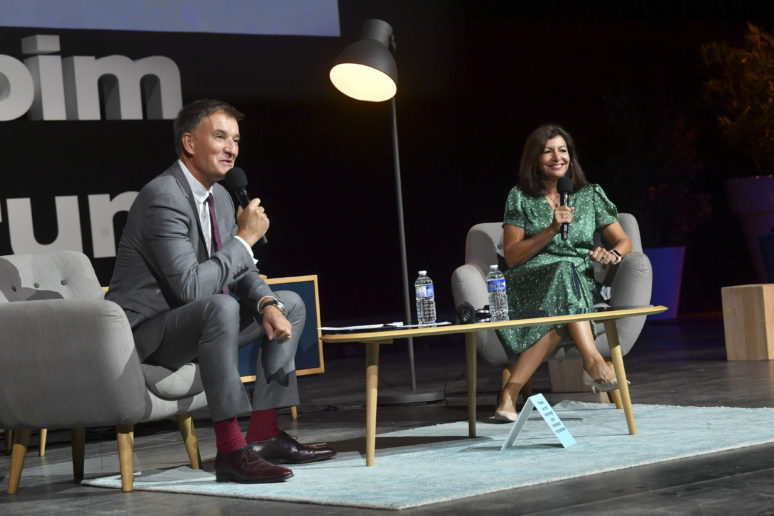 “We must build our cities and our communities in a more coherent, more cohesive way, and to integrate a more mixed nature in terms of uses and functions,” said Hidalgo.

As an example, she talked about schools becoming “courtyard oases”, green meeting places for neighbourhoods. For example, she said, schools could “welcome” local people during a heatwave, or be open for children to play at weekends.

We must build our cities and our communities in a more coherent, more cohesive way – Hidalgo

“A neighbourhood lives to the rhythm of the schools,” she said.  Already, she added, the city authorities were working on bringing in more greenery to schoolyards, to start creating these courtyard oases, in a city which is among the densest in Europe.

Call for more power for cities

Hidalgo wrapped up the session with a message for all mayors across Europe, and with a call for more decentralisation:  “We must go to the European Commission and ask for European cities to directly receive European funds to work on this transition. It will be quicker and more efficient than passing through national governments …

“[France] is too centralised.  This leaves insufficient space for local governments and municipalities to accelerate a transition and an economic rebound [from the crisis].  We need to be stakeholders in the European economic recovery plan.”

Hidalgo is far from being alone in calling for more devolution.  Renowned North American urbanist Professor Richard Florida, author of The Rise of the Creative Class, called for more devolution of power to the local level on a podcast for the UK-based Centre for Cities this spring.

“More local [administrative]levels have their hands on the pulse: they are more pragmatic; they are better able to deal with disaster recovery and relief, and with the recovery of their local economies,” said Florida.

“It’s [about]taking the functions of national government and devolving more of those powers to the local and sub-national level that is going to make us more effective.”  And not only more effective, but also more resilient.

Watch the full English version of the session on Reinventing Governance Models below; and for the original French version of Anne Hidalgo’s speech, click here…