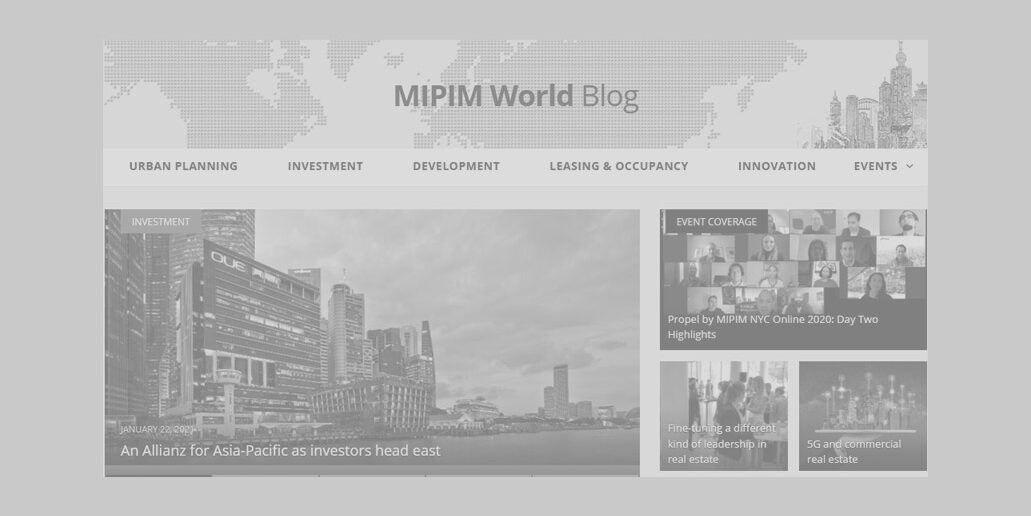 Architectural star Jean Nouvel talked about the importance of context when he took to the stage at MIPIM 2019 with Alexandre Allard, the developer of Cidade Matarazzo.
By Georgina Power on July 12, 2019 0 Comments

“Architects are at the heart of the conversation in the real estate value chain,” said Ronan Vaspart, MIPIM’s Managing Director, when he introduced French architectural star and Pritzker Prize winner, Jean Nouvel, as a keynote speaker at MIPIM 2019.

Architects conceive, design and build projects that change the face of our cities for years to come. With the theme of Engaging the Future for MIPIM 2019, it was only fitting that such a prominent architect took to the MIPIM stage.

Jean Nouvel was joined for his keynote address by Alexandre Allard, whose Groupe Allard is developing Cidade Matarazzo, a luxury mixed-use scheme set to be a new symbol of the Brazilian city of São Paulo.

One of Allard’s best-known projects is the restoration of the Royal Monceau Hotel in Paris. He was also the name behind the renaissance of fashion brand Balmain.

As part of the Cidade Matarazzo project, Jean Nouvel has designed the 93-metre Rosewood Tower, home to the first Rosewood Hotel in South America. Rosewood São Paulo, like the rest of the project, is due to open next year.

Reflecting an investment of around €470m, Cidade Matarazzo is the largest ever private investment in a listed heritage complex in Brazil.

Originally a hospital, and the birthplace of around half a million paulistanos, the Italianate-style buildings were opened in 1904 by Italian-born Count Matarazzo, reportedly Brazil’s richest man when he died in 1937.

“Cidade Matarazzo is about celebrating Brazil’s diversity, and especially the diversity of São Paulo” – Alexandre Allard

The buildings are a symbol of a city with a wide architectural and cultural diversity. “Cidade Matarazzo is about celebrating Brazil’s diversity, and especially the diversity of São Paulo, in a place charged with history, and which itself has stories to tell,” Allard told the MIPIM audience.

The site is linked by a pedestrian street to Paulista Avenue, the Champs-Elysées of São Paulo, used by one million pedestrians a day.

The original Matarazzo hospital has lain abandoned since it closed in 1993, “awaiting a new life”, as the French architect described.

Nouvel was asked by Groupe Allard to create a “building of a certain authority and density, and in scale with everything around”.

“Working on the bare square metres is something that will disappear. It’s all about doing the ‘content’” – Jean Nouvel

Cidade Matarazzo creates a small city, hence why it is called cidade, Portuguese for ‘city. The project includes:

In addition, the project is marketed as 100% made in Brazil. The construction work involves 2,800 Brazilian professionals trained by 40 engineers and 4,000 local craftspeople trained by Ateliers de France as part of a transfer of skills programme.

The Rosewood Tower – connecting with the environment

As a tribute to the neighbouring park, one of the largest in São Paulo, and to the Atlantic Forest of Brazil’s coastline, the Rosewood Tower is home to a “vertical forest”, as Nouvel describes it.

“Even at this scale, we have shown that the landscape and the vegetation can be a formidable advantage in an urban environment” – Jean Nouvel

Trees 10-15m high, and mainly native, are being planted on the terraces of the Rosewood Tower, so that residents look out over greenery. “The trees need to invade this new construction,” said Nouvel. “Even at this scale, we have shown that the landscape and the vegetation can be a formidable advantage in an urban environment.”

Bringing culture and creativity to everyone

Viewed from the sky, São Paulo is one of the world’s biggest concrete jungles. Cidade Matarazzo, said Nouvel, is about the “rebalancing of a town” made without an urban vision. “We are creating a place that talks and that has a soul.”

The challenge is to link the luxury elements of the project with the local, in a city where one quarter of citizens live in poverty; and at the same time to establish a leading tourist destination in South America.

“Everything is linked, the architecture and its ‘content’ is all linked. We are responsible for what happens in this space” – Jean Nouvel

The history of the hospital, where the rich paid for treatment and the poor went free, is reflected in the Cidade Matarazzo project. “It is about carrying forward that tradition with a cultural experience,” said Allard.

The Sala 22 concert hall will be open 22 hours a day. “We wanted a diversity in the hall, so there are people who will pay €2 to go to a particular event and others €1,500 to another,” explained Allard.

“There will be programmes in the mornings, the afternoons, theatre in the evening, and at night, concerts for the young … everything is linked, the architecture and its ‘content’ is all linked. We are responsible for what happens in this space.”

The chair of the MIPIM keynote session, Gilles Davoine, Editor-in-Chief of Groupe Moniteur, pointed out that Groupe Allard was taking on the role that in France would be normally done by the public sector.

“Slowly, slowly, we have won credibility, and, in the end, we have managed to do everything” – Alexandre Allard

Davoine asked: “Is it possible to do such a project in France?” Allard replied: “There are constraints. If you don’t give constraints to a good architect, they can’t work.”

On the other hand, there is the impossible, he continued. “Brazil is a country full of constraints, but nothing is impossible. We have worked on the project for 12 years, since 2007, but slowly, slowly, we have won credibility, and, in the end, we have managed to do everything.”