The role of ethics in corporate governance

MIPIM World talks about the ‘G’ in ESG with Karin Barthelmes-Wehr of the German Institute for Corporate Governance and the International Ethics Standards Coalition.
By Georgina Power on November 29, 2021 0 Comments

“I always say that if a heading reads ‘ESG’ that, if you look a bit further, usually they’re just talking about the ‘E’,” says Karin Barthelmes-Wehr, managing director of the Institute for Corporate Governance (ICG) in the German real estate industry and chair of the International Ethics Standards Coalition (IESC).

However, times are changing. We are in “transformation”, says Barthelmes-Wehr, echoing her words at MIPIM September Edition. We are moving towards the ‘S’ (social) and the ‘G’ (governance) being as important as the E (environment), she explains.

“The sentiment among society and stakeholders has changed. Everyone is watching us. Nowadays, if a company has bad governance, and a bad reputation, they will disappear very quickly,” she told MIPIM World, adding that it was Covid that gave the final push for people to “refocus on what was really important for them”.

We have to change as an industry otherwise we will be changed – Karin Barthelmes-Wehr, ICG/IESC

She cites the protests in Berlin against the private housing companies as an example of the shifting sentiment in society; while earlier this year the findings of a PwC survey revealed that 77% of institutional investors did not intend to invest any more in non-ESG products within two years.

Against this background is the slow but sure roll-out of new ESG legislation. In 2018, the EU adopted a ten-point action plan to address sustainability issues, and then in 2020 the first part of its ESG taxonomy.  As of 2022, different market sectors will have to report according to this new framework, which addresses mainly ‘E’ topics, with the ‘S’ and the ‘G’ yet to come, says Barthelmes-Wehr.

“It is clear that we have to change as an industry, otherwise we will be changed,” she adds. 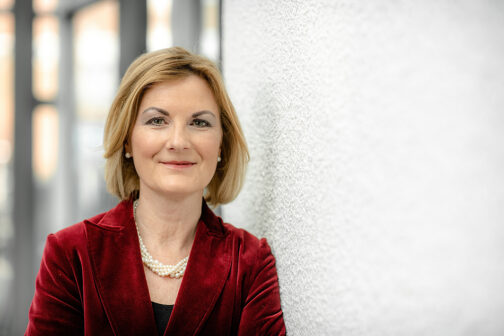 When the Institute for Corporate Governance (ICG) was set up in 2002, Barthelmes-Wehr and her team spent many hours explaining the idea of good governance to members of the German real estate industry.  “Now, the focus has changed. We have so many people wanting guidance, wanting to become members,” she says.

The ICG provides advice and training to its members across the German-speaking world in areas such as leadership, risk management, compliance and industry positioning, together with governance.   “We have worked very hard to make the industry more transparent, more professional,” she says.

Then, in 2014, the UN initiated a new project with the goal of developing a code of ethics for the real estate industry worldwide: the International Ethics Standards Coalition (IESC), of which Barthelmes-Wehr is chair.

“We help and learn from each other,” she replies. As an example, she says: “We’re learning from African countries about diversity, an area where some of them are far ahead of us and have many more women in leading corporate roles than, for example, in Germany.”

The role of corporate governance

“Good governance is the way the company is controlled, driven, organised. Ethics is about personal behaviour, the mindset,” explains Barthelmes-Wehr.

The two are intrinsically linked. “The ethics of the board members, or the managing director, directly channels into the governance of the company,” she adds.

Companies need to ask themselves: “What values do we want in our company or organisation? Do we have a values management system? What kind of behaviour or mindset do we want? What kind of example does the managing board provide for the company?”

The ‘G’ makes sure that the ‘S’ and the ‘E’ are strategically set in your company, and that everything is connected ­­– Barthelmes-Wehr, ICG/IESC

“All these questions belong together,” she says. “The ‘G’ makes sure that the ‘S’ and the ‘E’ are strategically set in your company, and that everything is connected. To be known for good ESG, you have to cover all three areas, and not just the ‘E’.”

When is behaviour ethical? Think of your mum.

Barthelmes-Wehr is finding herself increasingly in demand to speak about compliance and good governance at conferences and also at university real estate faculties.

The students often ask where the ‘ethical’ line is when it comes to compliance. Her advice is to ask yourself two questions: first, ‘Do I want this in the newspapers tomorrow?’; second, ‘What would my mum say if she found out.’

The key to a strong ethical values system and good governance is transparency, she says. “If you can explain everything you do transparently, whether it’s the deal you’ve done or the person you’ve talked with, and whatever questions are asked, then that is fine.”

Why good governance is good for business

She quotes Warren Buffett, CEO of Berkshire Hathaway, who famously said: “It takes 20 years to build a reputation and five minutes to ruin it.” The second half of Buffett’s quote was: “If you think about that, you’ll do things differently.” And companies, organisations and governments are beginning to do things differently.

Slowly but surely everyone is realising that they have to take care of the S and the G as well as the E – Barthelmes-Wehr, ICG/IESC

When the EU publishes its taxonomy on the ‘S’ and ‘G’ (as part of the Sustainable Finance Disclosure Regulation), this will in turn push the real estate industry to put more focus on good governance, she says.

“The EU started with the ‘E’, and everyone else did as well, but now slowly but surely everyone is realising that they have to take care of the ‘S’ and the ‘G’ as well as the ‘E’.

“It was only natural that everyone started with the ‘E’ as the real estate industry has such power to change emission levels, and to drive the world towards greater sustainability,” she explains, given that buildings and construction account for 39% of the world’s carbon emissions.

For the moment, the focus in the EU is on refining the ‘E’ given that “everything is still quite a challenge”, explains Barthelmes-Wehr. “Asset managers have to report data that they don’t really have because its tenants’ data, and then there is the issue of data protection laws.”

Is legislation the way ahead for corporate ethics?

When it comes to legislation, Barthelmes-Wehr believes the way should be led by the industry. “Self-regulation is much better. Governments and political bodies tend to be less focussed on a specific industry and sometimes they do not understand the way our markets work. However, EU legislation in ESG is coming for sure, and so we should all be prepared.”

The position of the ICG is also reflected in an article written by David De Cremer (now of the University of Singapore) based on work carried out with Henri-Claude de Bettignies (now of INSEAD) for London Business School in 2013. De Cremer writes:

“By using control systems to regulate our moral decisions and actions, we as humans detach ourselves from any sense of responsibility — after all, it is the system that is now responsible for the moral culture of our business.”

“The result of this is that we all start suffering from moral amnesia. Under those circumstances, the action or decision that is most favourable to one’s own interest will then become the most justifiable option.”

The final word from Barthelmes-Wehr

“We need to undergo this transformation to good governance very quickly,” says Barthelmes-Wehr. “In Germany, real estate is such a large industry, and we are slow – and the pressure being put on us is rising very quickly.

“The medium and smaller-sized companies, which are the largest chunk of the German real estate industry, often ask me, ‘What’s in it for me? I’m a developer. I only have 20 people in my company. Do you expect me to have a large compliance department?’

We need to undergo this transformation to good governance very quickly – Barthelmes-Wehr, ICG/IESC

“A lot of companies – especially the medium sized and smaller ones – haven’t even started to incorporate ESG in their companies and business models. They don’t know where to start or how to break everything down to handle as part of their daily business. And this is where there is a need for guidance.

“Corporate governance is now more important than ever to what stakeholders expect from us, what society expects from us, and also, of course, investors.”

Be part of the discussion on the future of real estate at MIPIM 2022 on 15-18 March in Cannes. Find out more about MIPIM’s Sustainability Charter.