UK regions power up for a new growth cycle

Cities need to think big, to set the vision and the strategy, says Amanda Clack, Head of Strategic Advisory at CBRE.
By Georgina Power on July 4, 2019 0 Comments

The UK regions, from the country of Scotland to the West of England, are entering a new cycle of urban regeneration, as they reinvent their cities to make them relevant in a world of global connectivity and rapid urban growth.

“Cities in the UK are waking up to the fact that they need to think bigger than a three or four-year cycle of government. Their role is to set the vision and the strategy for the longer term,” says Amanda Clack, Head of Strategic Advisory at CBRE, the commercial real estate services and investment firm.

The bigger-picture vision emanating from mayoral offices across the UK is already leading the way for a more people-centric approach to urban regeneration. As the mantra for West Midlands Combined Authority reads: ‘Building a healthier, happier, better connected and more prosperous West Midlands.’

With stringent cuts to local government spending, cities and regions are having to think differently, and to think smart. As well as setting the vision and the strategy, the role of the mayor’s office has become one of providing core infrastructural funding to help open the door for investment and development partnerships.

Foreign direct investment in the UK is increasingly looking towards the regions, and not just at London. This was reflected at MIPIM 2019, where exhibiting cities, regions and countries included Manchester, the West Midlands Combined Authority, Scotland (with its first ever pavilion), Nottingham and the West of England… together with London.

The UK Government chose MIPIM this year to announce £2.2bn of new investment opportunities, including a £1.19bn portfolio across locations in Wales. Also benefiting were Durham, Harrogate, Swindon, Bournemouth, North Essex, Oxford and Bicester – a nod to the fact that for growth to benefit all, investment needs to spread to the country’s smaller cities and towns as well to the big cities.

In today’s interconnected, digitised world, the future is one of collaboration – including collaboration between cities.  Clack cites the Scottish Cities Alliance between the country’s seven main cities: “The alliance allows for innovation and creativity within each of the key cities, and then they collaborate and share knowledge to create, as it were, an eighth city.” 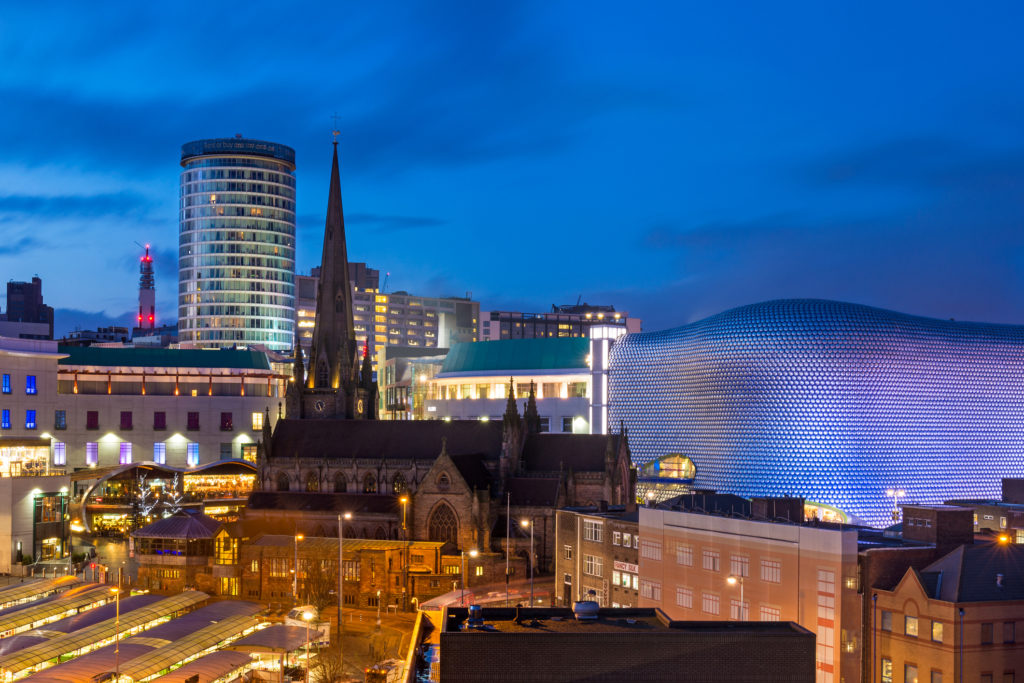 Birmingham in the West Midlands.

An already successful model is the West Midlands Combined Authority, an alliance of the local authorities of Birmingham, Wolverhampton, Coventry, Dudley, Sandwell, Solihull and Walsall.

The value of space between buildings

Whether individual cities or city alliances, new projects are being looked at with a new lens. “People want a space where communities can come together, for art, for music, to gather, or just to walk the dog at the weekend,” says Clack.

CBRE’s Our Cities campaign released last year showed that culture was one of three overarching components for a city to be resilient and effective. The other two were good governance and innovation, both technological innovation and innovative ideas.

It is about creating a sense of place and putting a value on space, she adds: “Our research has proved that there is a pound-note value for creating and maintaining really great spaces between buildings. This in turn enhances the value of the assets that you are building.”

Building on the sense of place – ID Manchester

Manchester’s innovation district, launched at MIPIM 2019, sits on a 10.5-hectare (26-acre) site in the city centre adjacent to the main railway station and the new HS2 station.

The University of Manchester is looking for a private partner to finance and deliver its strategy for the c£1.5bn project that builds on the city’s reputation for innovation in science and technology. It was at the University of Manchester that scientists split the first atom invented the modern computer, and where Alan Turing pioneered artificial intelligence and cyber security.

The vision behind ID Manchester, on which CBRE is advising, is to create a neighbourhood ecosystem linked to the community by tracking people’s ‘journey’.

Clack explains the concept: “This is where innovative new businesses and the wider community thrive in a connected enterprise and innovation ecosystem. Global firms will rub shoulders with dynamic start-ups and scale-ups for their mutual benefit. First you are attracted to study at the University, then you do your incubator start-up within the university, and from there you get your next generation of business.”

ID Manchester supports the live-work-play concept and provides a destination in its own right. On the housing side, ‘transitional’ living spaces are there to support the ‘traveller’, starting with co-living or micro-living.

The West Midlands unveils £10bn of opportunities at MIPIM

In the West Midlands, Mayor Andrew Street unveiled £10bn of real estate and infrastructure development opportunities at MIPIM 2019. Of the nine projects, two focus on the two new HS2 stations in the region:

The Cambridge-Milton Keynes-Oxford (CaMKOx) corridor is heralded by the National Infrastructure Commission (NIC) as one of the UK’s biggest ever economic and property development schemes.  The corridor focuses on a string of knowledge and life science hubs stretching from Cambridge to Oxford.

To fulfil its economic potential, CaMKOx needs around one million new homes up to 2050, says NIC, who launched a consultation into the preferred route for the central section of the new East-West Rail service connecting Cambridge with Oxford earlier this year.

“What is going to be key for CaMKOx is to set the vision,’ says Clack. Then, like the other projects in this new development cycle in the UK, it’s about driving this out through the infrastructure, and for the private sector to respond with the creation of one million homes, and a technology and science cluster that will make it an economic supercentre.”

For the moment, though, writing in the first week of April, many buttons are on pause, as the country waits to see the outcome of Brexit.

The views in this article are the views of the author and do not necessarily reflect the views of Reed MIDEM.