The United States is on the rise as markets reshape

European investors looking to diversify outside their home region are being attracted by a United States economy forecast to bounce back by 6.5% this year.
By Georgina Power on April 8, 2021 0 Comments

North America is set to be the top inter-regional destination for European investors in 2021, according to the EMEA Investor Intentions Survey released by CBRE this March.

Around 14% of the investors who took part in the survey intend to invest across the Atlantic this year, compared with 8% in developed Asia. In 2020, EMEA-based investors accounted for 63% of the total absolute decline in US inbound capital flows, according to CBRE.

Since the EMEA Investor Intentions Survey was carried out, the United States has passed into law a mammoth, US$1.9trn fiscal support package, which is set to raise US GDP by 3.8 percentage points and to help expand the economy by 6.5% this year – one of the highest growth rates in the world.

So it came as no surprise when François Trausch, global CEO & CIO of Allianz Real Estate, chose the US as the “dark horse” – rather than the longer-term prospect of Asia – when asked at the Leaders’ Perspectives Summit by MIPIM this March which regions of the world offered the most opportunity.

His choice was supported not only by the fiscal support package, but also by the rollout of the US’s vaccination programme and by favourable demographics – including the preference of “maturing millennials” (who will increase the 35-49 cohort by almost 20% over the next two decades) for renting newly built homes, of which supply is limited. 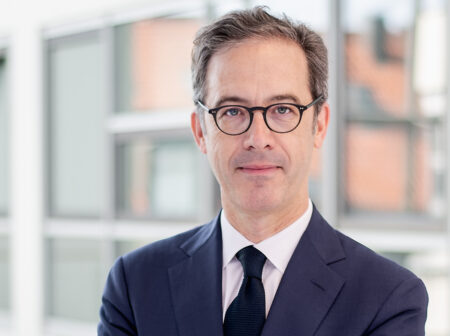 An interview with CBRE Capital Markets in New York

For a global investor, the US is about the benefits of geographic and economic diversification, and a “safe haven with relatively fewer questions pertaining to the health of the economy and the overall commercial real estate market,” says Brandon McMenomy, Executive Director of Capital Markets, CBRE.

MIPIM World Blog spoke further with McMenomy, who is based in CBRE’s New York office, about the opportunities for European institutional investors in the US:

What attracts the European investor in the United States?

“Presently, most of the interest is centred around traditional office properties – particularly in the top 10-12 CBDs, with a core profile accompanied by a manageable equity commitment.

“Interest for core industrial is high given secular shifts in consumer buying habits and the distribution of goods, although it’s a competitive space.

“Additionally, we have seen a material uptick in multifamily interest from European institutional capital as their comfort level and knowledge of the asset class increases.” 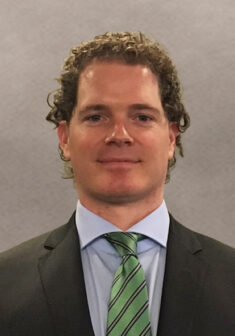 Don’t limit yourself to core properties in the top five or six gateway CBDs in the US … Competition tends to be lower for non-core assets in these gateway markets, and they offer an attractive basis and return profile at stabilisation – Brandon McMenomy, CBRE

What’s your top piece of advice for an institutional European investor looking at the United States?

“Don’t limit yourself to core properties in the top five or six gateway CBDs in the US.

“While core-plus properties in the gateway markets remain an opportunity, availability is constrained. Competition tends to be lower for non-core assets in these gateway markets, and they offer an attractive basis and return profile at stabilisation.

“Additionally, while it may feel somewhat pioneering to an institutional European investor, there is encouraging data suggesting that the top secondary CBDs in the US, such as Atlanta, Charlotte, Austin, and so on, are poised for material growth accompanied by an institutional quality exit.  As the pandemic has unfolded, employers are expanding into these markets and employees are following.”

Are there any areas where a European investor might have an advantage over a local investor?

“With respect to a specific market or asset class, international investors may benefit by having a fresh perspective whereas a local investor could be burdened by a long-term bias. Additionally, many international institutions possess a lower cost of capital that can make their pricing structure more appealing to a seller.”

Do they need to work with a local partner?

“ While it’s not a necessity, working with a local partner/advisor is helpful. A local partner can provide colour and assist with underwriting, site visits, etc, that can add credibility to the offer and reduce a due diligence timeframe.”

The Allianz approach in the United States

In 2020, Allianz committed a total of US$832 to “best-in-class” properties across a range of sectors in the US, including offices, industrial, multi-family and life sciences. These included:

The US debt team, meanwhile, originated new transactions amounting to a total of US$1.1bn.

Earlier this year, Allianz also made a US$300m investment earlier this year in the Upward America Venture, a private single-family rental vehicle managed by LennarSFR, a newly formed subsidiary of the US’s largest homebuilder Lennar Corporation.

The approach of Allianz Real Estate, which in the US works out of a head office in New York, and two local offices in California and Georgia, is to work with strong, local partners, who share a commitment to environmental sustainability and social wellbeing.

And offices in the United States?

Three “pressures” will affect the demand for office space in the US over the next 12 to 18 months said Lisa Picard, president & CEO of EQ Office, the real estate investment company, at the Leaders’ Perspectives Summit by MIPIM:

The way forward as to how these factors will transform the workplace lies primarily with the tech sector, said Picard.

What this new workplace will look like is yet to be fleshed out, but in the meantime Big Tech is expanding their office space in the US. Together with similar moves by Apple and Facebook, this year’s announcements include:

“Coming together in person to collaborate and build community is core to Google’s culture, and it will be an important part of our future,” said Sundar Pichai, CEO of Google and Alphabet, at the time of the announcement.

Looking at CBRE’s Americas Investor Intentions Survey 2021, 27% of US investors believe that demand will decrease “significantly” for offices. This is a much higher figure than for investors in EMEA (15%) and APAC (10%).

Speaking at the Leaders’ Perspectives Summit by MIPIM, Trausch underlined the “fluidity” of the office market in the US, where the decision to move office from one city to another is far easier than, for example, moving from Paris to Berlin.

The US view of the United States market

CBRE’s Americas Investor Intentions Survey, released this March, reveals that investors have greater appetite for risk; 30 per cent of respondents said that they were targeting opportunistic and distressed assets in 2021 – a record level. Investors also showed a preference for secondary markets.

This rise up the risk curve is likely due to the “stable economic environment, supported by government stimulus, and the belief that available capital will remain abundant for the foreseeable future, as well as intense competition among investors”, said CBRE.

When it comes to the equity markets signalling rising inflation expectations, CBRE added that at the time of the survey, commercial real estate investors “did not appear to be overly concerned in the near term”. 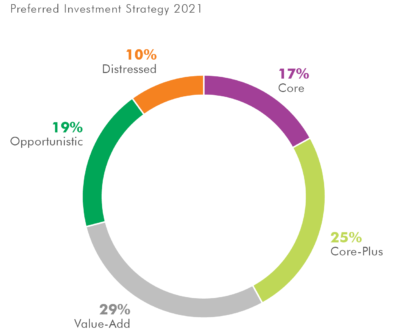 The higher risk tolerance is supporting the growth of the alternative sector, the survey reveals, with 72% of respondents actively pursuing investment in one or more real estate alternatives in 2021. 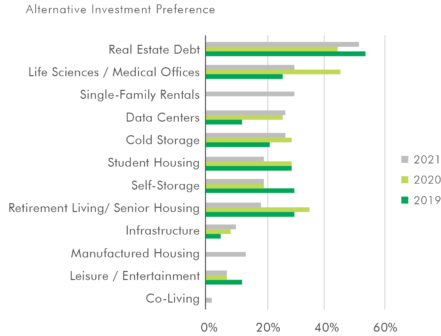 When it comes to location, the sunbelt garnered more interest than the top-tier gateway cities, given their strong job and population prospects. 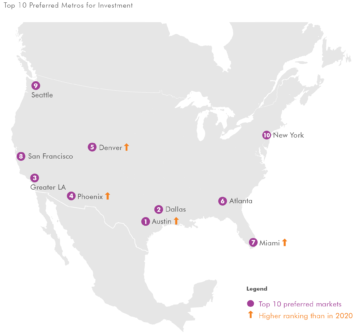 The gateway cities in the US are defined as New York, Boston, Washington DC, Chicago, San Francisco and Los Angeles, only three of which make the top ten ranking for 2021.

“We’ve seen a lot of margin-based companies migrate from legacy markets to low-cost markets like Dallas and Florida,” said Picard of EQ Office at the Leaderships’ Perspectives Summit by MIPIM.

Legacy markets will need to “reinvent themselves” to “attract the next layer of talent” and create “concentrated centres of excellence” linked to academic institutions, such as in Boston (life sciences and robotics) and Northern Virginia (cloud development & cybersecurity), she added.

It is all about making cities, communities and investments resilient to what the future might throw up – from health crises to the return of inflation.