PropTech investor landscape – the firms, groups and people you should know

Here is the ultimate list of proptech venture firms, real estate firms and owner & operators, working in the proptech landscape.
By David Goldberg on September 21, 2017 0 Comments

Sixteen months ago I wrote my first post on the topic, titled “Who To Know in NYC Real Estate Tech”, intending it to be a valuable resource for years to come. But as the Proptech revolution has accelerated, the landscape has changed, with new players emerging, expanding far beyond New York (though it’s still clearly the epicenter). At the current run-rate, total dollars invested into the space are expected to exceed 2016 by 25% to $3.4B (this doesn’t even include companies like AirBnB and WeWork, which would put the total closer to $10B). So it’s time for an update…Part II.

As the space is finally getting its due, a host of players have jumped into the proverbial pool. As often happens with investing, there is a ton of noise to cut through. We’ve done the work for you – here’s who should be on your radar. This time I am only focusing on the investors that are providing the capital. While we all know that the entrepreneurs are the real stars of the show, there are now just too many. Last year, it was a manageable list. Now, it is a hotbed of talent, pulling from Wall St, top MBA programs, and corporate institutions.  Perhaps this graphic from CBInsights will give you a sense of how crowded it’s getting: 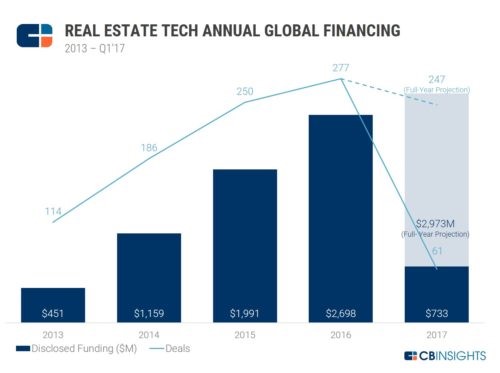 Andreesen Horowitz – the firm often referred to by its URL, A16Z, was founded in 2009, but has certainly made it’s mark, accumulating $2.7B in AUM after big wins like Instacart, Pinterest, AirBnB, Lyft, Asana, Dollar Shave Club, and others. Where they go, people follow. Well where they have gone recently is PropTech, making 7 investments including Cadre, Zumper, Point, and PeerStreet.

Greylock Partners – an industry stalward founded in 1965, and famous for investments in Facebook, LinkedIn, , Workday, and others Greylock has made 8 real estate technology investments, including recently Redfin, whose recently successful IPO many point to as a leading indicator for the future prospects of PropTech. Additional investments include AirBnB, Matterport, Zumber, LiquidSpace, Dynasty Marketplace, NextDoor, and Otto.

Felicis Ventures – smaller in size than some of the bigger names, above, the Menlo Park based firm has punched above its weight with successes like Shopify, Twitch, Dropcam, and Fitbit. On the PropTech side, they have invested in OpenDoor, Floored, Matterport, Lovely, Lighthouse AI, and PeerStreet.

Fifth Wall – bursting on to the scene just last year with a $212M fund, the Venice, CA-based firm led by Brendan Wallace and Brad Greiwe leverages its LP base of real estate leaders (CBRE, Lennar, Prologis, etc) to gather insights and further its companies along.  Focused predominantly on Series B and beyond, it also recently announced its accelerator to do earlier stage deals.

Moderne Ventures – the Chicago-based firm led by Constance Freeman just closed its first traditional fund with $33M in commitments, which compliments the late-stage accelerator program (The ‘Moderne Passport’) they had been running.

MetaProp – I’m surprised it took so long to get a true, real estate focused accelerator program, but MetaProp seized the opportunity just two years ago, connecting early stage startups with investors and potential clients alike. The 16-week program culminates in the traditional demo-day, which acts as a first point of contact for many investors interested in the space. 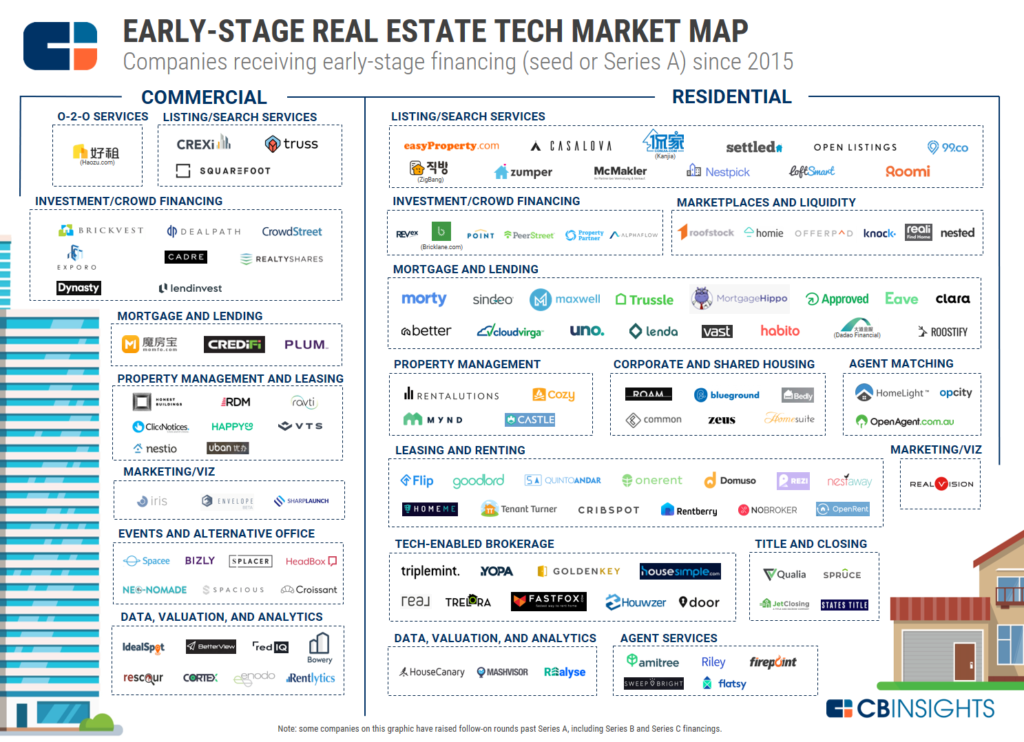 Camber Creek – backed by the Berman family (and now outside LPs as well), Camber was an early adopter, as it has been investing in real estate technology only since 2009. The fund leverages its own (and LP’s) physical portfolio to test and implement technologies. They’ve made over 20 investments, including VTS, LoftSmart, Bowery, and Parkifi.

Simon Ventures/Westfield Labs – two of the largest mall owners in the country both have their versions of venture capital arms, investing across stages in companies disrupting retail, and industry desperate for innovation.

WeWork – seemingly just a startup itself until recently, the co-working behemoth has now raised over $8B in capital, with its latest valuation pegged at $20B. As it has always considered itself a platform for creators, it’s now started to go beyond providing physical space to providing capital in a variety of forms.

Corigin Ventures – shameless plug alert! Corigin is an owner/operator of multifamily properties in New York, Miami, and California, with an independent venture fund focused on seed stage investing in the future of daily living. While this includes multiple categories, real estate will always be a major focus, as seen by investments in Compass, Latch, Loftsmart, Paintzen, Roam, Bowery, Morty, Quilt, and Transported.