Over the two days, a raft of trends and themes emerged, shaping the planet’s burgeoning PropTech industry and acting as a clarion call for the makers of future solutions.
By Isobel Lee on December 19, 2019 0 Comments

MIPIM PropTech NYC 2019 attracted thousands of delegates in search of the latest PropTech and ConTech intel, November 12-13, with industry disruptors, civic leaders, real estate professionals and venture capitalists coming together in the city’s Metropolitan Pavilion. The event was organised in partnership with MetaProp NYC.

1 – The lessons of the past

In today’s fast-moving, tech-enabled world it would be easy to forget that just a few short years ago technology’s reputation for driving business took a severe knock in the wake of the dot com bubble. In a “fireside chat”, Scott Rechler, CEO and Chairman, RXR Realty LLC, described that event as all part of the path to growth.

“The tech bubble planted the seed and foundation for tech companies, which then led to their ability to recognise vast development at a rapid rate,” Rechler said. “Technology not only innovates, but also creates a greater sense of community to build a more connected and engaged workplace.”

Brad Greiw, co-founder and managing partner Fifth Wall, affirmed that the industry was in a crucial transition phase. “The real estate industry overall has just been wildly under-indexed on technology and tech spending for the past 30 years. A lot of the recent movement has just been the industry catching up, but some of the problems that persist don’t necessarily accommodate quick change.”

Appreciating cultural differences is another key dynamic, delegates heard at a session focussing on the potential of Chinese PropTech. “China is almost cashless – you don’t even bring your credit card out anymore,” explained Alice Guo, director of product innovation, Ping An Urban Tech. “Everything is done with your phone. People also prefer to have their faces scanned to enter a building – you have to adapt to what the customers want.”

This can change across demographics too, noted Dawn Mottram, director of strategic initiatives, Jonathan Rose Companies, in a focus on affordable housing and social inclusion. “You can’t assume people have smartphones, or even phones, particularly in the low-income, senior space,” she pointed out.

Despite all this, sometimes the challenges are the same wherever you go, suggested Nick Romito, co-founder and CEO of VTS.

User demands and customer-centric solutions were a key focus of MIPIM PropTech NYC 2019.

In his keynote, Ryan Anderson of Herman Miller, a global designer and manufacturer of furniture, analysed the necessary conditions for human-centric problem solving.

“There are many technologies that have been created by people with excellent aspirations to help change users’ lives, that for one reason or another, didn’t work out,” Anderson said. “We need to find solutions that make daily life better.”

Part of the challenge involves never losing sight of the human being holding the technology, said James Segil, president of OpenpathSec, who described how his company arose out of frustration around having multiple key cards to access offices. His solution was to collapse those into a phone app. “I noticed in real estate spaces there was more focus on money than the user,” Segil said in a session on creating value with connected assets. “I want to focus on delighting people every single day.”

3 – PropTech in the city

Cities today are at the forefront of the PropTech race. In his keynote, Josh Sirefman, chief development officer of Sidewalks Labs, suggested that city challenges have coalesced around the “issue of affordability, whether it’s climate change and sustainability, or equity and equitable distribution”. Sirefman shared a solution his firm had devised for the City of Toronto, which created an ambitious, scalable ecosystem to drive sustainable development. 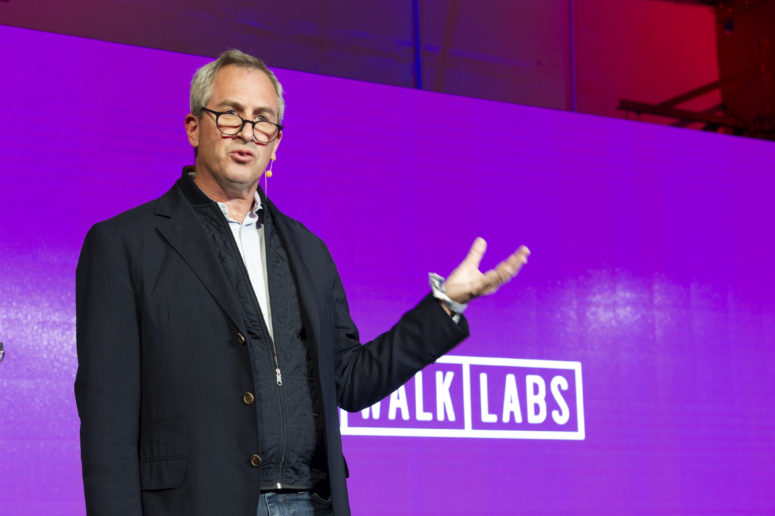 Exploring the future of mobility, Alexandre Missoffe, executive director of the Greater Paris Investment Agency, said that his team had used PropTech to create a new public transport line for night shift workers in an industrial area by tracking their phone signals to understand demand.

However, Dror Poleg, owner Rethinking RE, advocated a back-to-basics approach for tech-hungry civic leaders. “I think Tokyo gets it right for nothing too glamourous – a great subway network that works; things are clean; rubbish is being collected and sorted properly.” He cautioned: “Beware of cities that are focussing on tech for tech’s sake.”

With PropTech increasingly being applied at a city and state level, MIPIM PropTech examined pathways to more efficient public and private partnerships.

“There are natural tensions between government projects and innovation,” said Angela Pinsky, executive director, Association for a Better New York. “If public bodies pick the wrong new technology the consequences are much worse than the inefficiencies of playing it safe. The question is – how do you take new technologies that have a public benefit, and help them scale effectively and rapidly?” 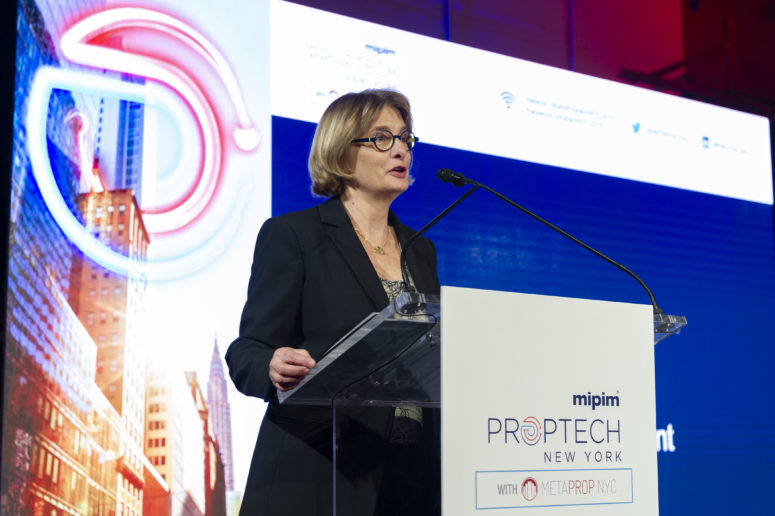 Vicki Been, New York’s Deputy Mayor for Housing and Development

Keynote speaker Vicki Been, New York’s Deputy Mayor for Housing and Development, said that her team wanted to work with cutting edge private business to solve public issues. “We’re looking for innovators not to just produce something new, but to produce something better,” Been said. “We have more Fortune 500 companies here than anywhere in the world. In NYC, 67% of greenhouse gas emissions come from our buildings, and we need new solutions to improve this.”

She added that solutions would need to aid every strata of society. “Meeting both the challenges of those struggling to find affordable housing and those who can live in luxury buildings is the focal point of our city’s problem,” she said.

6 – The emergence of ConTech

The construction world is facing serious challenges, delegates heard. “I think construction is the only industry that gets more expensive and slower every year. Probably 30% of all construction projects require major changes which really start to accelerate those costs,” said Lisa Picard, chief executive of real estate investment company EQ Office.

For this reason, the emergence of ConTech could be one of the industry’s biggest game-changers. Ryan Freedman, chairman and CEO of Corigin, spelled out its potential in a dedicated session. “Construction is a $10 trillion annual spend – 7% of the world’s workforce is in construction,” Freedman said. “ConTech is in its infancy compared to PropTech, but is a giant monster now breaking out to be its own category.”

The PropTech world is also developing key specialisms, with AI emerging as a vital area of research. “AI is such a large umbrella for a lot of different things,” said Gijo Mathew, chief product office, VTS, in a dedicated session. “It’s really about what jobs we can do or what outcomes we can solve. The question is which ones drive the most impact and drive the most value.”

An important and under-exploited area remains the data field, said John Gilbert, COO & EVP of Rudin Management Company, much of which is being generated by AI applications. “Data is only useful if it can be mined and packaged and ultimately refined,” he suggested. “You should not fear data, as long as you can blow up the silos it currently sits in, and understand the correlation between those data sets.”

8 – Venture capital in the PropTech space

With so many small and growing PropTech firms trying to find the path to success, the relationship between them and more established sponsors – including venture capitalists – is a compelling one.

“Techies need support to get into the market. Real estate players have a hard time dealing with techies if there’s nothing in between. Taking a seed company to North America is hard – 95% die along the way.” He added: “We are vetting start-ups to try and get engagement from the market.”

KP Reddy, founder and CEO of Shadow Ventures, shared his tough-love approach. “As a start-up founder, you should have massive detachment from your company. Not all ideas are fundable. Passion is overrated,” he said. “Solve real problems that are high priority problems and have been benchmarked. Then build an elegant solution that has the potential to be defensible.”

9 – In search of sustainability

PropTech is already having a huge impact on the real estate sustainability race, delegates heard. A keynote from Anthony E Malkin ran through the Empire State Building’s ground-breaking energy efficiency retrofit, and strategies for engaging the whole community of a building. “Without the fine tuning of the building, we would have lost all the savings – $1.92 million dollars,” Malkin said.

Tech solutions for social housing addressed matters of security and efficiency – twin problems in the low-income home space. “We’re looking at energy monitoring and real time data for utilities, rather than waiting for it to come through on bills,” said Mottram of Jonathan Rose Companies. Delegates heard how brand-new social housing schemes were “instantly full”, but Charlotte Matthews, director of sustainability at Sidewalk Labs, described one approach for meeting demand in a greener way. “We plan to build a factory that creates passive-house-inspired all-timber buildings which are fireproof and have superior insulation, moving the aesthetic away from all glass,” she said.

An expert panel on digital security ran through some key risks faced by the industry, as well as profiling the lucrative cybersecurity industry – in receipt of some $4 billion in venture capital funding in 2018.

Moderator Min Kyriannis, head of cybersecurity at Jaros, Baum & Bolles, asked a panel including Erik Hart of Cushman & Wakefield, Robert Entin of Vornado Realty Trust, Sandy Jacolow of Meridian Capital Group and Karl May of Join Digital what kept them awake at night. He received a unanimous response: “The lack of concern our generation has in terms of keeping their personal data safe.”

May said: “How many people clicked the link, despite receiving an email that explicitly said ‘do not click the link below’? Over 20%!”