Regulation & Legal: Visions for the Future

Amelia Slocombe, Head of Legal at the Loan Market Association, recaps on what is next for the real estate finance market in a European context, including post Brexit, Libor, Euribor, NPLs & the OECD’s BEPs.
By Georgina Power on August 6, 2019 0 Comments

Three main areas likely to be of relevance with Brexit are:

A lot of what we do in the EU, we do without thinking about whether we are legally able to do it, because of the free movement of goods and services within the EU.

“When there is no longer free movement of services between the UK and the EU and vice versa , the issue of whether lending is legal between those two regions can become a grey area, and it’s greyer in some EU countries than others”

When there is no longer free movement of services between the UK and the EU and vice versa , the issue of whether lending is legal between those two regions can become a grey area, and it’s greyer in some EU countries than others. It’s also not easy to carry out due diligence in each and every EU country to ascertain whether or not someone from outside the EU is entitled to lend monies to borrowers who are resident there. 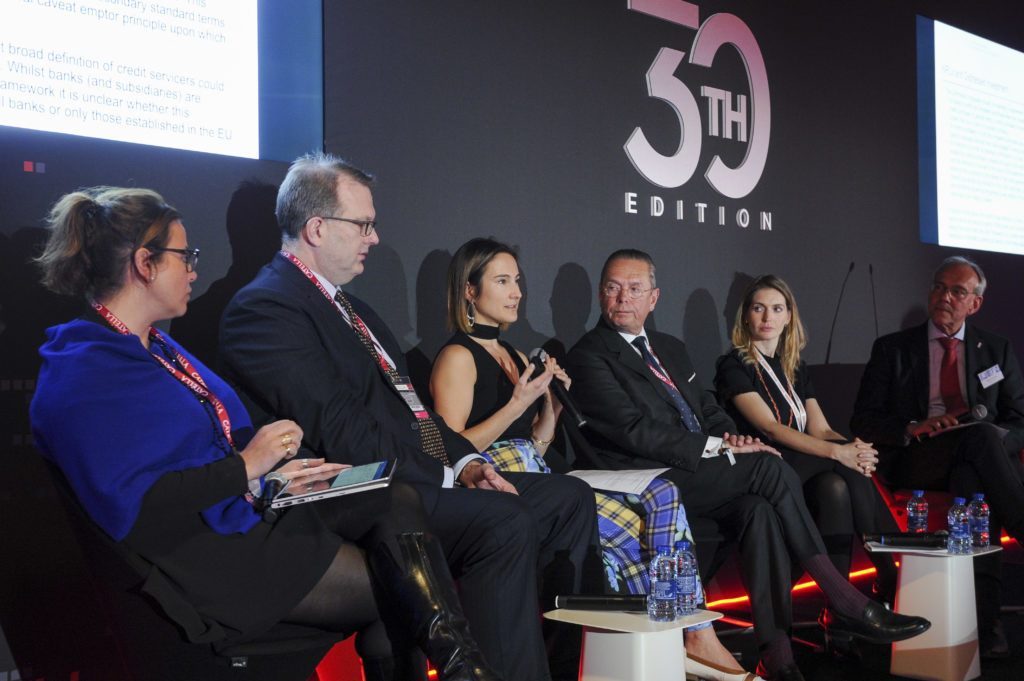 “Regulation & Legal: Visions of the Future”, with Amelia Slocombe (centre)

Similarly, you might have had arrangements in place historically where you were comfortable with the legality of the lending arrangement, but politically there could be a drive to change that in certain countries. That’s why a lot of what we’ve been lobbying on from a passporting perspective is about highlighting the importance of cross-border payment flows.

“No one really knows what will happen post Brexit in a lending context. A very small technical illegality could arise, but it is an illegality, nonetheless”

No one really knows what will happen post Brexit in a lending context. A very small technical illegality could arise, but it is an illegality, nonetheless. If you think of it like the millennium bug back in 1999, despite the panic the millennium bug never transpired to be of any relevance. But it’s that kind of situation, where you don’t quite know what’s going to happen post Brexit. It’s very much about waiting and seeing.

That said, that doesn’t mean the parties are necessarily going to continue to be comfortable with using English law as a governing law. We think they probably will, as English law is a very established governing law for contracts. English law gives you good contractual certainty. But who’s to say that that won’t change going forward.

Jurisdiction is slightly different post Brexit. At present, the UK has submitted papers to the Hague Convention which would enable parties to ensure enforceability of an English law judgement in an EU jurisdiction, provided they select the jurisdiction as being UK exclusive.

There are other issues, however, which are not solved by the Hague Convention. For example, a contract might benefit from a non-exclusive jurisdiction clause, with the flexibility to choose a different jurisdiction, depending on the situation at a particular time.

We believe that the issues surrounding jurisdiction and the governing law are likely to be ironed out post Brexit. That said, if English law stopped being the governing law of choice for large corporate loan documents, then we would have to look to produce more German law, French law, or whatever the prevalent governing law of the contract was. Already we have real estate finance templates for German law transactions.”

Andrew Bailey, head of the FCA, delivered a speech in July 2017 declaring, much to the surprise of the cash markets, that Libor was likely to end in 2021.

This came about following the Libor scandal in the derivatives market. From a lending perspective, there’s never been a problem with rate fixing of Libor; there’s been no manipulation and the scandal never tarnished the loan market in that sense.

“The issue with moving away from Libor is that there’s currently nothing in the cash markets that operates in the same way to replace it. This is a global problem”

But, because Libor’s a benchmark for which there is perceived to be a lack of underlying supporting transactions, regulators now want to move away from it. However, the issue with moving away from Libor is that there’s currently nothing in the cash markets that operates in the same way to replace it.

This is a global problem. If you’re borrowing on a floating rate basis, the interest rate for a lot of emerging market lending, a lot of project finance loans, and anywhere that borrows US dollars, is likely to be US Libor.

A lot of large loans are multi-currency, and they can be based off Libor as the benchmark rate, and then drawn in different currencies. At the moment, this works well because your margin can be the same across your currencies as there’s a Libor rate quoted at the same time across different currency groups. Now, each currency is looking at a different replacement benchmark.

With no Libor, various issues arise, with quotation timing for each different currency being one of them.  The credit premium that banks obtain from Libor is also an issue if such premium is not incorporated within any replacement rate. How do banks replicate that premium?

There are various options for the loan market, which different participants are looking at. Libor is also forward looking: you know your interest rates 1, 3 or 6 months’ in advance. If Libor is abolished, then you don’t know what your interest rate is going to be until the end of the relevant month period. That is not ideal from a borrower’s perspective.

In the case of Euribor, regulators are reviewing Euribor to try to make it benchmark-regulation compliant. Euribor is hugely prevalent across the financial markets in Europe. Even retail mortgages in countries such as Poland can be based off Euribor, and that creates the additional problem of Euribor being a consumer issue.

What the Loan Market Association is doing to help lenders

In the real estate market, NPLs are quite a big part of the market, particularly in certain jurisdictions. The worrying thing is that the directive doesn’t define NPLs as NPLs; it refers to the regulation of credit servicers and credit purchasers in the recovery of collateral.

When the directive came out, it captured the entire loan market, so that’s the SME market, the consumer loan market and the corporate wholesale loan market, both par and distressed. And it meant that if a bank were going to transfer a loan commitment to a non-bank it would have to fulfil various requirements, and some of these were quite concerning.

“We have been lobbying the European Commission extensively on this directive. The good news is that they are now looking to define NPLs in a more targeted fashion”

We have been lobbying the European Commission extensively on this directive. The good news is that they are now looking to define NPLs in a more targeted fashion. But there are still some worrying aspects that remain, for example, banks are required to:

This directive has the potential to have a hugely detrimental effect on the NPL market, even though it is designed as a directive to improve it. We are therefore working with the European Council and the European Parliament in an attempt to make it more workable whilst still achieving the objectives it set out to achieve.

As many of us are aware, people structure transactions not to avoid tax, but to make a structure more tax efficient. The issue with the initiative is that a ‘principal purpose test’ will be introduced which invalidates an arrangement if it’s reasonable to conclude, having regard to all relevant facts and circumstances, that attaining that benefit was one of the principal purposes of any arrangement or transaction that resulted directly or indirectly in that benefit. Now a lot of real estate transactions, where lending is potentially difficult, where there are significant withholding tax implications, are structured for that reason.

“If your domestic legislators interpret or implement BEPS aggressively, your structure could be vulnerable”

The OECD principles aren’t legally binding, but each country can choose to adopt them, and it looks like most countries are going to adopt BEPs. For borrowers operating in a jurisdiction that imposes withholding tax, this is something to be aware of. If your domestic legislators interpret or implement BEPS aggressively, your structure could be vulnerable.

Amelia Slocombe was the moderator of the MIPIM 2019 panel session, Regulation & Legal: Visions for the Future. The above article captures what she shared at the session.