Covid-19 is a test case for urban areas, and no less so for public spaces. Green space and biodiversity are key to providing mental and physical wellbeing.
By Georgina Power on June 1, 2020 0 Comments

Public spaces are intrinsic for urban life to flourish.  Under lockdown rules, urban design features such as pocket parks, open squares and tree-lined walkways are emerging to help form a blueprint for creating resilient cities.

This comes at a time when, as put by future forecaster The Future Laboratory, “the notion of wellbeing has shifted from the individual to the social”.

Building resilience in the social, as well as the individual, is about building humanity – to bring in more joy and a sense of purpose, said Arnaud Collery, chief happiness officer at Stand Up For Passion, on the MIPIM Connect “Reinvention & Resilience” webinar.

Resilient cities are cities prepared for future shocks. They are cities which ask ‘what if’?

The built environment as one interconnected system 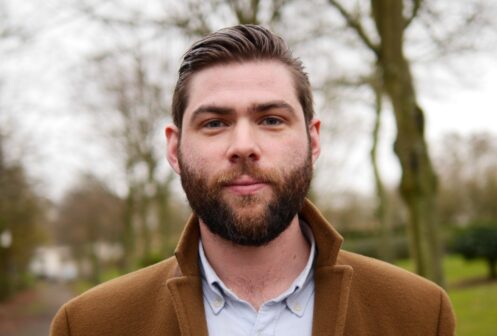 When it comes to the built environment, says Josh Artus, co-founder of urban health research lab & consultancy Centric Lab, urban areas need to be viewed as one interconnected system.  No building, public space or transport route can be looked at in isolation.

“People’s health, wellbeing and productivity do not start as soon as they walk into a building. Two different people walking into the same building will have two completely different experiences, depending on their journey to the building and where they have come from,” says Artus.

“The high-level cognitive thinking needed in the modern workplace requires a lot of mental energy, and the more depleted the body and brain are by stress and toxic environments the worse the performance. It’s therefore critical that the real estate industry understands their role in creating the spaces in-between.”

The role of nature in public spaces

A growing body of research shows how essential nature is to our wellbeing. Yale Environment 360 calls it ‘ecopsychology’.

Our human need to connect with nature is rooted in our DNA, which is still catching up with our urban lifestyle.  As home sapiens, we have spent 96 per cent of our existence in the wilds of nature, before the first farmlands were created on the banks of the Nile, and only 4 per cent in settlements.

Gaining ground among planners, designers and architects are practices such as ‘urban rewilding’ and ‘biophilia’, with the latter described by Foster + Partners as the “innate tendency within humans to seek interactions and connections with the natural world”.

One of the 11 design principles for the redesign of Grosvenor Square, one of London’s most historic squares, is the focus on the square being a ‘natural haven’.

The power of ‘designed’ nature is to be “positive, uplifting, overwhelming, calming, invigoration refreshing and joyful” – Nigel Dunnett, University of Sheffield

In a webinar about the redesign, Nigel Dunnett, Professor of Planting Design and Urban Horticulture at the University of Sheffield, who is advising on the project, said that the priorities for urban greening should be, in order of importance:

While the power of ‘designed’ nature is to be “positive, uplifting, overwhelming, calming, invigoration refreshing and joyful”, he added.

Gehl urban design & architectural practice highlights the importance of “creating opportunities to connect with nature within walking distance of homes” – the first of their Five Principles for a Resilient City, drawn up after studying the effects of the Covid-19 lockdowns in four cities in Denmark and in New York City.

Much of the work done by Centric Lab, which uses the tools of neuroscience and big data/AI, focusses on the ‘stress response’ – a response kicked into action as much as when someone is looking to rob you in the street at knife point as when our bodies respond to the toxins in traffic pollution.

The remedy is to “integrate restorative qualities across our urban fabric” – Artus, Centric Lab

Such chronic stress affects our mental wellbeing – cognitive, emotional and psychological – as well as our metabolic and physical health. The list of possible illnesses and side-effects runs long: ranging from obesity to diabetes, high blood pressure to strokes, high anxiety to low self-esteem.

For Artus, the remedy is to “integrate restorative qualities across our urban fabric” of interconnected systems. “We can put back dignity into the hands of citizens of all walks of life,” he adds.

Public spaces for solitude and wellbeing

With access to outdoor spaces so crucial for our wellbeing, forward thinking practices are redesigning public spaces to not only encourage social distancing – for our Covid and post-Covid era – but to provide moments of individual solitude.

Temporary responses have included the white circles drawn on the grass in Domino Park in Brooklyn and the 1.8-metre grid of painted squares as part of the StoDistante installation in a piazza in Vicchio, near Florence. 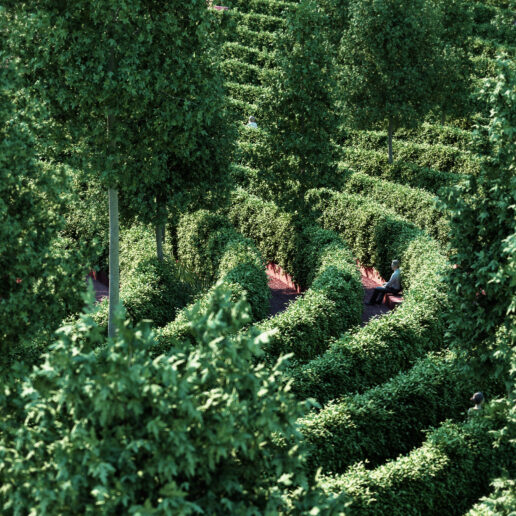 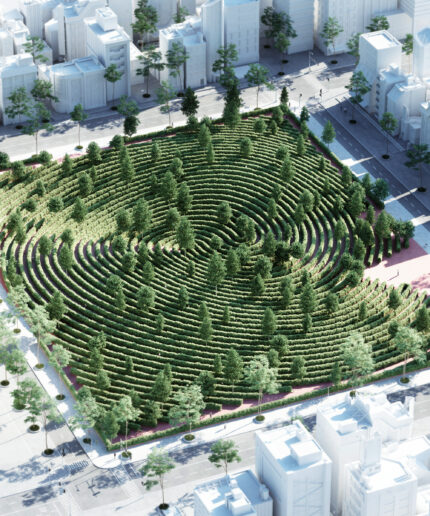 To maintain a human touch, the design of the Parc de la Distance is inspired by a fingerprint, with parallel lanes guiding visitors through undulating landscape:

“For now, the park is designed to create a safe physical distance between its visitors. After the pandemic, the park is used to escape the noise and bustle of the city and be alone for some time. I have lived in many cities, but I think I have never been alone in public. It’s a rare quality,” said Chris Precht. “Sometimes you have to get away to fully connect.”

Reclaiming space from cars to give to people

Foster + Partners advocates reclaiming space from cars and giving it to people as one of its three key strategies set out in Tactical Urbanism: Reimagining our cities post-Covid 19.

“Urban acupuncture – small, tactical interventions in the built fabric – has the potential to make a big impact” – Foster + Partners

In the short term, in several cities around the world, this is already happening, as public authorities widen walkways and allow cafes to spill over squares once full of cars.

In London, citing the Derbyshire Pocket Park and Van Gogh Walk as examples, Foster + Partners says that “urban acupuncture – small, tactical interventions in the built fabric – has the potential to make a big impact”.

In Singapore, public spaces is also about food security.  The city-state authorities are turning over nine multi-storey public housing car parks to urban farming as part of Singapore’s 30 by 30 goal to produce 30 per cent of it nutritional needs locally by 2030.

Key to understanding how the physical and built environment impacts health and wellbeing is the lens of neuroscience, says Artus. “We can then build more industry and policy-based plans to have a better human outcome.”

In London, Centric Lab has developed software – in the beta phase of development – that maps out every 20 x 20 metre unit of the city for environmental factors such as air, noise and heat.

“You can’t have a healthy building in a sick city” – Artus, Centric Lab

This gives a scientifically graded assessment of an area’s health in order to help understand which ‘levers’ are needed by people who use the area – whether for more green space or to point out the advantages of a particular form of transport.

“The financial measures are still the same: you buy it, you build it, you rent it or sell it.  It is the approach that is different” – Artus, Centric Lab

“Everyone needs to be on a rising tide, and when we only think about the development and densities in cities, and the capital value, we are creating our own downfall. You can’t have a healthy building in a sick city.”

“The real estate sector has to take some for of ownership and responsibility for public space” – Artus, Centric Lab

Do city density better – and make our cities healthier

The pandemic had brought the city density issue into sharp relief, Jules Pipe, London’s Deputy Mayor for Planning, Regeneration, Skills, told the MIPIM Connect webinar on housing in the UK. The pandemic, he said, was a wake-up call to “do density better” and to make our cities healthier.

Individual developments need to “ensure that localities have the open space to make them workable and liveable” – Jules Pipe, London’s Deputy Mayor for Planning

“We have to think about shared space across a master planned area, as too many [planning]applications are done in isolation,” he said.  Individual developments need to adhere to these masters plans to “ensure that localities have the open space to make them workable and liveable”.

However, as Samuel King, writing about the historic demonisation of density in CityLab, says: “City leaders should remember their problem is the virus, not urban life.” Not all the places hit hard by Covid-19, such as the Grand Est region in France, have been big, dense cities.

Even though our DNA may not have caught up with living in a concrete jungle, we as homo sapiens are still hard-wired to hunt for opportunities.

At one time this was for berries, nuts and firewood. Now these opportunities are economic, social and cultural.

The very raison d’être of a big city is to provide opportunities.  Weave in the immersive, rewilded public spaces, and that also helps make cities attractive and resilient places to be.