After 30 months of paralysis, the UK leaves the European Union on 31 January. What’s next for UK real estate post-Brexit?
By Georgina Power on January 28, 2020 0 Comments

“We see a long-term future in the UK,” said Kenneth Leung, vice president of Hong Kong-based Lai Sun Group, at the MIPIM Asia Summit, a few weeks before the UK Conservative Party achieved a resounding victory at the polls in December, opening up a new series of questions for UK real estate post-Brexit.

Leung’s call was for clarity. And now the new year has started with clarity, even though the Conservatives’ success may have had less to do with its ‘get Brexit done’ stance and more to do with keeping out Labour and its manifesto of higher taxes.

This renewed clarity, and focus, is highlighting that the UK – and especially London as a global gateway city – is one of the world’s most attractive markets for the global investor, and especially now.

“London looks attractive when compared with other gateway cities around the world.In the office market, yields for prime properties are around 4%, which compares favourably to the 3% or so to be found in cities such as Paris and Frankfurt.” – Oliver Watt, Savills

At the same time, the UK has the advantage, among others, of landlord-friendly leases, a transparent legal structure and the current attractiveness of the pound sterling.

The bounce after the results of the December general election fed through to the commercial real estate market within days.

“The investor interest has never gone away since the [June 2016] Brexit referendum. 2017 and 2018 transaction volumes were at near record levels for London offices,” says Watt. “But markets don’t like uncertainty, and the continued delays to a withdrawal agreement with the EU, plus the added political uncertainty of a general election, impacted volume levels in 2019.

“A number of the deals signed in December were agreed prior to the election, but buyers were waiting for the election results to come through before committing to a transaction,” Watt adds.

At £1.69bn, office investment transactions for December 2019 in the City of London were 322% up on the month before – Savills

The West End market was equally as buoyant about UK real estate post-Brexit.

Two key transactions for December were:

Further buoyancy is expected in the London market, given the “huge weight” of capital chasing limited supply and the “excellent fundamentals” in the occupiers’ market, which could well see London office rents rise in 2020, reports Savills.

Investors looking at the UK are from around the world – North America, Asia and EMEA, with institutional investors from Germany and France now back in the market.  Domestic investors are also highly active again.

“While 2017 and 2018 transaction volumes were the 4th and 3rd highest recorded, despite the uncertainty triggered by the 2016 referendum, the lower volumes in 2019 were more to do with the gap between the pricing expectations of buyers and sellers than with a lack of interest or appetite from investors,” – Oliver Watt, Savills.

“Buyers wanted a discount, given the lack of clarity in the market; while sellers and owners did not want to sell at a discounted price, worried about their ability to redeploy the proceeds, and, if they really needed the capital, they could release some equity by refinancing, as the all-in costs of borrowing were low again compared with 2018,” he adds. 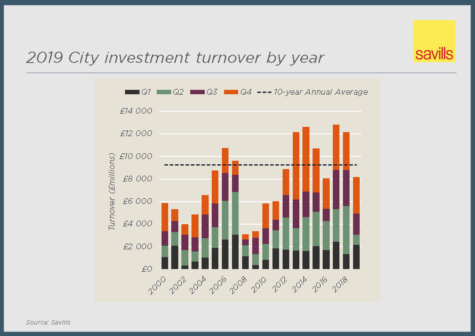 With supply so tight in London, some foreign investors – especially those chasing high yields – are now looking outside the capital. The city centre office markets in Manchester, Edinburgh and Glasgow are highlighted by Savills as current good buys.

The city centre office markets in Manchester, Edinburgh and Glasgow are highlighted by Savills as current good buys

Foreign investors are also looking at alternative markets, including student accommodation, healthcare and government income on national portfolios. Singaporean and Middle Eastern investors, Watt points out, are particularly “on the hunt” for yields across the UK. 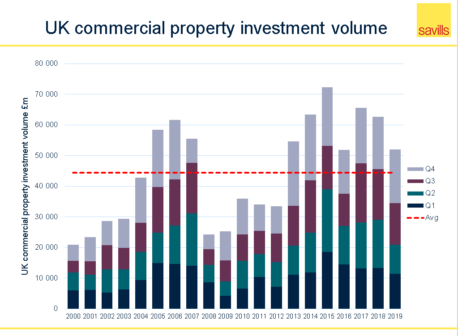 The view from Asia on Brexit Britain

The Lai Sun Group made their first London purchase in 2011, in Queen Street, near Mansion House, which they sold in 2018 at a yield reflecting 4.1% after being approached off market.

The Hong Kong-based group went on to buy three adjacent properties in Leadenhall Street. With Skidmore, Owings & Merrill (SOM) as architects, the redevelopment of the three properties will start in 2023 to create 100 Leadenhall Street, the third tallest tower in the City.

“From our perspective, we have already analysed and factored in the outcome of Brexit, whether it is hard or soft” – Kenneth Leung, Lai Sun Group

“From our perspective, we have already analysed and factored in the outcome of Brexit, whether it is hard or soft,” Leung said at the MIPIM Asia Summit.

However, despite the flexible approach of the savvy, well-informed investor, Brexit came as a shock. “We were asking: ‘Now that the status quo has changed, how are we going to position ourselves going forward?’” recounted Leung.

For The Brexit effect: a “sizeable correction” to values, published here in July 2019, we asked Capital Economics to do some star gazing.

Now, six months on, the London-based economic research consultancy has given a fresh take on the future.

“The election has removed some Brexit uncertainty and the property outlook is slightly improved as a result. But the concerns about reaching a trade deal by the end of 2020 mean that any upside is limited for economic growth or property returns” – Andrew Burrell, Capital Economics

Capital Economics has pencilled in this year’s economic growth in the UK at about 2% better than for 2019. “This is still weak,” says Burrell. “Overall, we expect rents [across the UK]to pick up, but any growth will be modest, at around +0-1% year on year, and retail will still see steep falls. By contrast, yields will rise and although this will be mainly due to the repricing in retail, we expect a little upward pressure in other sectors too in the light of the prolonged uncertainty.”

With regards to interest rates, Capital Economics says they are likely to be on hold “given the potential end-year cliff edge”. Burrell adds: “We don’t expect much of a Boris bounce in investment either.”