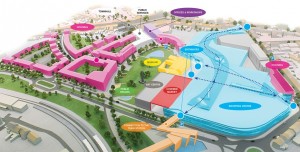 A new city center district, cornerstone of the rejuvenation of an industrial town in search of a new momentum.

Winner of a European tender, the Wilhelm Group has the ambition of turning the Faïenceries Boch site – a 16 hectare brownfield in the
heart of La Louvière (Belgium) – into an ambitious urban mixed-use development: La Strada. This new district, anchored by shopping, leisure, and cultural activities, will also include housing, offices and car parks. These various functions will surround a large park and a new city-center public square which will host a variety of events: farmer’s market, concerts, Christmas events, and many other. Adding greatly to the attraction of La Louvière’s city centre, La Strada will create the link between the city’s high streets , the train station and the town hall.

The Wilhelm & Co Group has a recognised expertise in tackling such ambitious challenges. La Strada aims at duplicating a concept which in two previous similar situations – L’esplanade in Louvain-la-Neuve and Médiacité in Liège – significantly contributed to the revitalization of their districts. La Strada will offer to its residents, tourists, and the 400,000 inhabitants of its catchment area an ideal place for living, working, relaxing, shopping and eating out, in a delightful architectural environment.