Sonder lengthens the runway for take-off in Europe

Montreal-born hospitality group Sonder is getting ready for take-off in Europe. We talk with co-founder Martin Picard about the next generation of hospitality spaces.
By Georgina Power on August 12, 2021 0 Comments

Sonder, the San Francisco-based hospitality group, likes to think big, and far. Founded in Montreal by Francis Davidson eight years ago, with Martin Picard joining shortly after, the company is looking to create the “next generation” of hospitality spaces.

Earlier this year, Sonder announced a merger with Gores Metropoulos II Inc, a special purpose acquisition vehicle, or SPAC. The merger values Sonder at US$2.2bn, and it will give Sonder US$650m of cash proceeds – a useful coffer for its planned expansion in Europe.

“We’ve always had ambitious targets. We see the merger as providing additional runway rather than extra fuel to go faster,” says Martin Picard, who is Sonder’s global head of real estate, as well as co-founder. “Strong levels of capitalisation make us an attractive partner for real estate players.”

We see the [SPAC] merger as providing additional runway rather than extra fuel to go faster – Martin Picard, Sonder

The Sonder model finds its roots in Montreal during the student days of CEO Francis Davidson, when he managed a handful of apartments in the city. The model centres on offering a variety of “beautifully designed” and affordable accommodation options from serviced apartments to aparthotels and hotels. 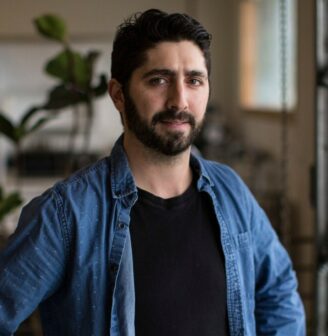 Whether for travellers, remote workers or long-term renters, these spaces are all about the experience – an experience facilitated by cutting-edge digital technology, while maintaining a healthy net operating income for partners and what Forbes calls “shrewd leases”.

To date – since launching in 2014 – Sonder has over 5,000 ‘keys’ in  more than 35 prime city-centre locations around the world. These locations are mainly in North America,  with sights now set on expanding further in Europe.

“We see Europe as such an important part of our business; the region offers huge opportunities, and it has so many iconic cities,” Picard told MIPIM World Blog. “It’s also a good match for us from a brand perspective, from a core-value perspective, and from being able to operate a wide range of building sizes.”

Sonder opened their first property in Europe in London in 2017. Since then, Edinburgh, Rome, Dubai and Dublin have followed, as well as Amsterdam, Barcelona and Madrid this year alone. 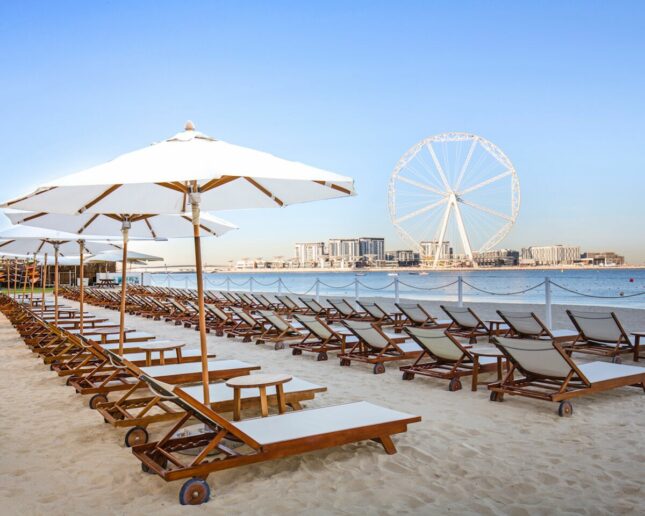 The beach at Sonder’s JBR Suites in Dubai

Sonder has nearly 1,000 ‘live’ units across Europe and Dubai, working with partners that include the likes of M&G, Grosvenor Group and Al Fattan Properties LLC.

[Europe] is a good match for us from a brand perspective, from a core-value perspective, and from being able to operate a wide range of building sizes – Picard, Sonder

The regional hub in London and EU headquarters in Amsterdam are often called to work on a global level as well. “We chose to double down in London and Amsterdam as we have found really good talent in these two cities, both from a technology perspective and from an innovation perspective,” explains Picard.

The size of Sonder’s properties in Europe vary from hotel rooms, to suites and aparthotels.      A recent opening is Park House, a 19th century town house hotel overlooking Vondel park in Amsterdam’s Museum District, close to the Rijksmuseum and the luxury shopping of PC Hoofstraat. 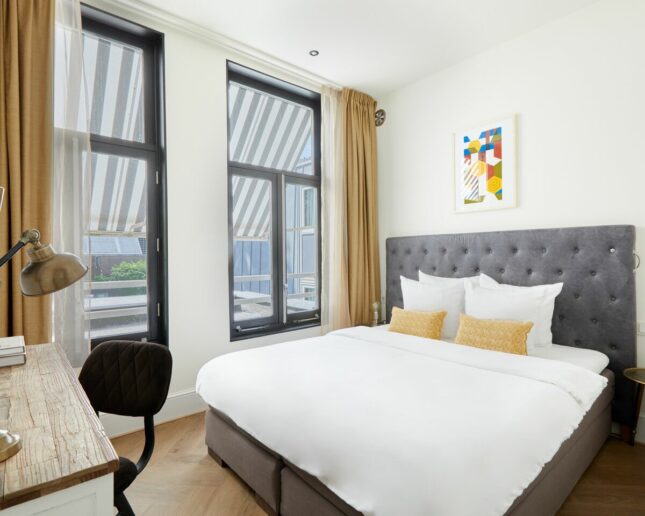 Globally, Sonder’s “ambitious target” is to be the world’s largest hospitality group. In key cities such as Montreal – where Picard is based – and in New Orleans, Sonder already operates and manages multiple buildings. In Europe, the company is “on the runway” for take-off.

Sonder looks to create the next generation of hospitality

Over the pandemic lockdowns, Sonder’s global occupancy rates were stable at around      70%, says Picard. “The pool of people travelling has been much smaller, but they are staying for longer.”

Revenue per available room was at US$77 in the first three months of 2021, which outperforms traditional hotels by 2.1 times, announced Sonder this July.

We leverage technology to deliver [a]great experience, and then we let people pick how much space they want – Picard, Sonder

And the secret? “When we started the business, we saw ourselves as providing a hotel-level service in an apartment setting. Then we realised that [hospitality]is more about delivering a great experience in different types of spaces. We leverage technology to deliver this great experience, and then we let people pick how much space they want.”

“To create this experience, we put a lot more emphasis on the technology, from how you book, to how guests manage their stay and what happens after their stay. This has allowed us to become much more efficient, and to offer attractive price points without stripping out extensive services.”

Through its technology driven service model, Sonder properties plug into an “infrastructure” of local services, amenities and experiences – from food delivery, to reserving a workspace or ordering a taxi. Many of these services did not exist ten years ago, adds Picard.

[The next step] is about how we can leverage data to bring the experience to the next level – Picard, Sonder

The next step in evolving Sonder’s model is to personalise the stay experience. “It’s about how we can leverage data to bring the experience to the next level. So if you’re visiting London, and you like to go for a jog, how can we know this?  How can we come up with routes that are interesting to you, whether it’s your first time in London or your fifteenth.”

How Sonder works with partners in Europe, and around the world

About a third of the transactions that Sonder does every quarter are with existing real estate partners. For example, in Barcelona – a city where at present they are working with three different landlords – they opened their fifth property this year, Casa de Luz, an 83-key hotel near Plaça de Catalunya. 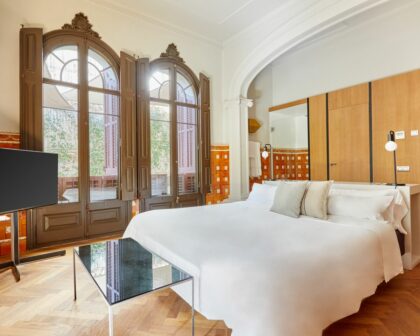 Le Palacete in Barcelona, a city where Sonder has five properties

“They understand the Sonder model. They know we can do both aparthotels and hotels, and that sometimes we do a mix in one particular building. We work with our partners to identify the shopping list of locations that we want in a city, and then they look for properties on our behalf.”

[Our partners] feel that our approach, with modern services and bringing in more technology, is the way to go – Picard, Sonder

Working with Sonder provides three main advantages, Picard says. First, it’s about the greater net return on investment per square metre; and then it’s about the relative flexibility of the Sonder design and brand standards.

Thirdly, explains Picard, “A lot of our partners are building a hotel for the next 20, 25 years, and they are taking a back-row view, to ask themselves: ‘Where do I think the guest experience is going at a macro level?’  And they feel that our approach, with modern services and bringing in more technology, is the way to go.”

Our focus will be on doing what we do best, which is cities, and getting depth into our existing markets – Picard, Sonder

With many larger hospitality groups looking to open more drive-to destinations, Sonder is staying with its city-centre model. “We’re open minded about sea and ski destinations,      but as the travel sector begins to bounce back, we’re even more committed to sustainable growth that enhances local neighbourhoods and communities.”

Sonder has also seen a shift in landlord behaviour, with attention now more on underwriting a business model rather than a lease.  “We see a lot of landlords really diving in to understand the nuts and bolts of why exactly we have been so successful, especially when compared with other hospitality companies who had, on the surface, a better covenant than we had two years ago.” 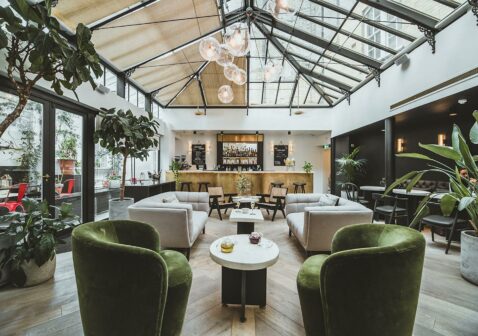 Working with local artists across Europe to “inspire” and “connect”

Sonder is also known for working with the local art and design scene. “When I came out of school, I worked for Deloitte for six years, travelling to different locations in North America, and staying at a certain type of hotel, where, when you open your eyes in the morning, you would never be able to tell if you were in New York or Phoenix or Vancouver. It all looked the same, every time,” says Picard.

“Our view is that too much consistency can be soul crushing. When people travel, yes, they want reliability, they want to feel that it’s like home, but at the same time they want to feel inspired and connected to the city they’re visiting, and one of the best ways to do that is through art and design.”