“Cities only work when you think about the people”

“Cities only work when you think about the people”

One of the most important issues of our time is how we make better cities, writes editor Andrew Tuck in the introduction to The Monocle Guide to Building Better Cities. It is about “making places that deliver quality of life for all”.

For a growing number of professionals in the real estate industry, including Alex Notay, Build to Rent Fund Director at UK-based PfP Capital, ‘better’ cities are about creating ‘inclusive’ cities.

Inclusive cities are those where citizens feel part of their city’s story and evolution, regardless of their wealth, age, sex, ethnicity, culture and mobility.

“So often we reduce cities to assets or to physical components, yet cities only work when you think about the people,” says Notay.

A further 2.5 billion people are expected to live in our cities by 2050, estimates the United Nations, with urban areas accounting for 70% of global population.  For many in the world, a move to the city represents a way out of poverty. The danger, says the World Bank, is that “poverty is rapidly urbanizing”.

Cities are also growing in diversity as well as size, creating an even greater need for inclusion. However, diversity is shown to help cities thrive, as revealed in studies such as the one on the ‘creative class’ in the US by urban theorist Richard Florida, co-Founder of CityLab web magazine.

Creating an inclusive city is like balancing on a wobble board

The World Bank has identified three essential types of factors that go towards creating an inclusive city:

“A city has to offer a balance of all three factors to be inclusive; put more weight on one factor rather than another, and then it’s like a wobble board and you lose balance,” says Notay.

Around 90% of the growth in global urban population until 2050 will take place in Africa and Asia, according to UN estimates. Urban populations in the developed world are also expanding, but here the issue shifts more to one of the re-invention of cities as attractive places to live, work and play, and as creators of wealth, able to stand out on a global stage.

For many Western economies, the siloed nature of the urban development process, segmented into a plethora of professions and specialisms, is holding back the creation of inclusive cities, says Notay. Even if everyone does their ‘bit’, and does it entirely ethically, the end product can fall short because of the lack of a holistic approach.

This difficulty in achieving such a holistic approach is partly because the development process takes so long: a large urban placemaking project can take ten to 20 years, from planning and financing through construction and to community creation. Given the pace of societal change, it’s almost inevitable that a scheme will have to evolve and adapt but there isn’t always the team or budget in place to do so over the long term.

The ideal process is about ‘curating’ the right mix of use: public areas, parks, workspaces, housing, retail, all easily accessible and affordable, including for local, independent businesses.

It’s also about the co-creation of cities together with local citizens; Notay cites the German city of Hamburg as an example of a city which has formally embedded the voice of its citizens into a truly participatory planning process.

A balance has to be struck between old and new; regeneration and gentrification, whether downtown Los Angeles, resurging Detroit, or South Side Chicago, where it has taken an artist, Theaster Gates, to transform a previously rundown district through his Rebuild Foundation.

On accepting the 2018 ULI JC Nichols Prize for Visionaries in Urban Development, Gates told Urban Land magazine: “My work has always aimed to revitalize forgotten spaces and, in doing so, bring together communities that have felt forgotten.

“The incredible thing that happens when you revitalize those spaces, preserving elements of their history and infusing them with new purpose, is that you create a platform for communities to participate in their own revitalization.”

Nearer to her home, Notay highlights the harbourside Wapping Wharf development in Bristol. This award-winning scheme has transformed previously derelict land in the city centre into a new residential district. Wapping Wharf offers mixed-tenure housing, local independent shops, cafes and restaurants and the creative use of refurbished shipping containers to offer further space for small businesses.

“Gentrification is in the eye of the beholder”

The Wapping Wharf area, which naturally has a high footfall, is teeming from sunrise to sunset… and beyond, says Notay. She adds: “Gentrification is in the eye of the beholder. What is wonderful for one person may not be for the person who has lived in the area for 50 years and misses the corner shop that is now an artisan deli. The challenge is to balance historic preservation with re-invention for a successful future.”

Much talk is about smart cities. Even Alphabet Inc, the parent company of Google, has its urban innovation arm, Sidewalk Lab, which is creating a new kind of mixed-use community on Toronto’s Eastern Waterfront, together with the public organisation Waterfront Toronto. 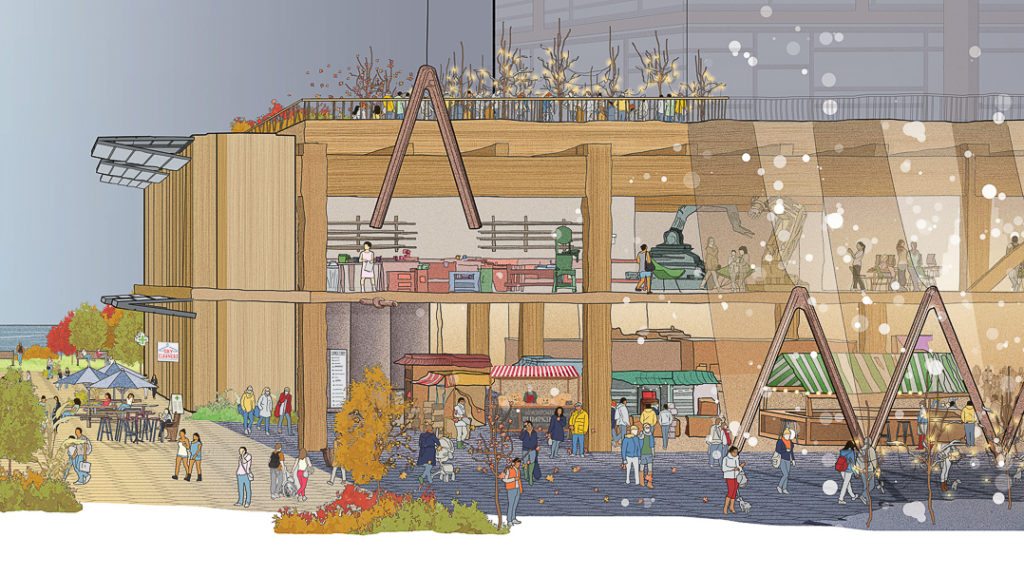 “We have to future-proof changes in technology by grounding in people-first principles.”

“Smart cities will only be successful in the long term if they put people, placemaking and communities at the heart from the very start,” says Notay. “Tech has so much to offer but it evolves so quickly and none of us have a crystal ball. We have to future-proof changes in technology by grounding in people-first principles. At PfP we look to focus on the core issues we’re aiming to solve rather than being side-tracked by a shiny new piece of kit!”

For cities to be inclusive, it also about “allowing people their spaces”, whether this is for different cultural groups to meet or for providing access for people with disabilities as well as those with pushchairs or heavy luggage. “You cannot force social cohesion; what you can do is to plan to not exclude people deliberately,” Notay says.

“You cannot force social cohesion; what you can do is to plan to not exclude people deliberately.”

So much of the creation of an inclusive city is about changing the way the real estate and urban professionals think. Notay continues: “Even if it is about the architect and project manager looking into getting a better price for the bricks so that the social housing can be built with the same materials as the private housing, or the developer looking to make 20% of his or her housing wheelchair-accessible, that makes a difference. This is all doable upfront but usually prohibitively expensive to retrofit.”

As Jane Jacobs, the ground-breaking 20th century urbanist and activist, wrote: “Cities have the capability of providing for everybody, only because, and only when, they are created by everybody.” Inclusive cities create value in the long term for all, including for the real estate industry.

The views in this article are the views of the author and do not necessarily reflect the views of Reed MIDEM.