The art of creating urban places

Art & culture has become a key component of place-making, creating economic and social value, and a sense of place, bringing people together.
By Georgina Power on November 12, 2019 0 Comments

When The US$475m arts centre, The Shed, opened at Hudson Yards in New York City this spring, the headline in The New York Times read: “In a Playground for the 1 Percent, an Arts Center for the Rest of Us.” Art & culture is no longer seen as exclusive. In fact, on the contrary, it has become an essential part of placemaking.

The ULI UK Urban Art Forum (a cross-sector group brought together by the UK division of the Urban Land Institute) launched its first publication this October – Including Culture in Development, a detailed six-step guide for property developers on how to incorporate art & culture into their projects.

Gone are the days of ‘plop art’, a term coined in the 1960s for art ‘plopped’ into its environment with little thought.  The need now is for art & culture to be rooted in the overall strategy of an urban project or of city planning: to create a “specific, shared vision, meaningful to the site and to the goals of all its stakeholders”, says the guide.

Sculpture in the City. Bridging Home by Do Ho Suh © Gina Power

Developing an art & culture infrastructure has a wealth of modes of expression that span from street art, sculpture and design, to theatre, dance and music. Sitting around the table are the private and public sectors, and arts and community organisations.

Properly embedded in the built environment, art & culture brings vibrancy and wealth, by creating places where people want to live, work and play. They bring health and wellbeing – the experience of attending a live gig is reported to boost general wellbeing by 21%; attract tourism, both from far and near; and bring economic gain, as values and occupancy rates rise, and jobs are created.

“As people we choose to be in a location because it gives us a sense of belonging,” said Fatos Üstek, Director of Liverpool Biennial of Contemporary Art, which, for its 2018 edition, brought a total net contribution to the Liverpool economy of £6.6m, together with the event’s social value.

Üstak was a key speaker at the launch of the new ULI UK Urban Art Forum guide at London City Hall.  The guide is about helping developers incorporate art & culture to bring a feeling of “speciality”, an authenticity, a sense of agency – a belonging, as well as inspiration and innovation, Üstak told the audience. 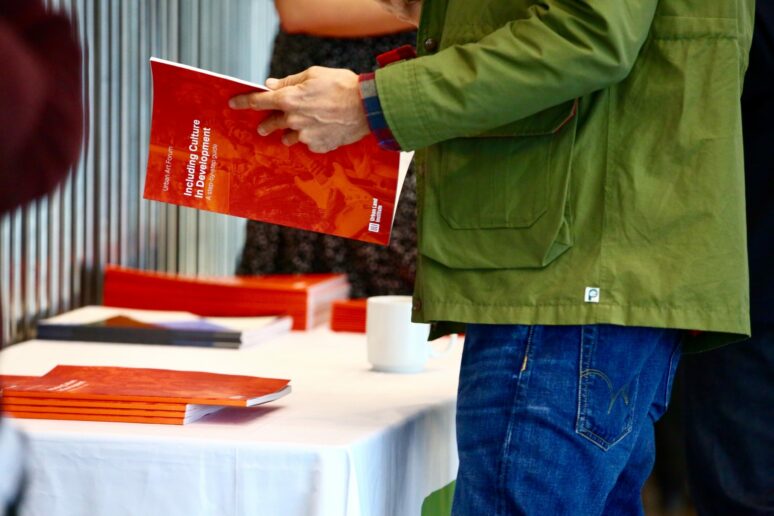 Joining her on the platform were:

Among the case studies in Including Culture in Development is the Broadgate Estate Art Programme.  The Broadgate neighbourhood – owned by British Land – is London’s largest pedestrian area, with events held all year round.

British Land is also the Headline Partner of the London Design Festival. During this year’s festival, Broadgate’s Finsbury Avenue Square became home to a landmark project by Paul Cocksedge, Please Be Seated. During a visit to the square, I asked a banker having an informal meeting with a colleague among the installation – made out of scaffolding planks – why he liked going there: “The lack of structure,” he replied.

Talking about art & culture at MIPIM 2019

“Places to congregate have become more important than places to buy things,” said Shain Shapiro, one of the joint authors of the ULI UK Urban Art Forum guide, and a panel member of Leisure: Re-enchant the City at MIPIM 2019.

Shain Shapiro, PhD, is Founder & CEO of Sound Diplomacy, and Co-Founder of Music Cities Convention, a global conference exploring the relationship between music and the built environment.

Sound Diplomacy has worked on bringing music projects to 50 cities around the world. Projects include delivering a music hub strategy for the Fabra i Coats Creative Factory in Barcelona, and a music and night-time economy strategy and assessment for The Lexicon Bracknell, a joint venture between Legal & General and the Schroder UK Real Estate Fund.

Sound Diplomacy is also author of the report This Must Be The Place, commissioned by Legal & General and released this autumn, complete with playlist! The report, which focuses on the UK, where live music contributes £1bn to the economy, looks at the role of music and cultural infrastructure in creating better future cities for everyone.

Music needs to be part of a “strategy that relates to policies on regeneration, leisure, health and wellbeing, and tourism” – Shain Shapiro

At MIPIM, Dr Shapiro said that to re-enchant the city, music needed to be part of a “strategy that relates to policies on regeneration, leisure, health and wellbeing, and tourism”.  It is about having a music strategy for 365 days of the year, he said.

“Flip the coin. See the functions in different ways.  How can you use them? How can they be attractive?” – Jacob Kurek, Henning Larsen

Jacob Kurek, Partner of Henning Larsen, the Danish architectural practice behind the design of Reykjavik’s Harpa Music Hall, said that re-enchanting the city was about “openness” and  providing options. “Flip the coin,” he said. “See the functions in different ways. How can you use them? How can they be attractive?”

It is about “co-creating” and “having people participate in what we create” – Alessandro Gaffuri, CELS Group

Alessandro Gaffuri, Founder & CEO of CELS Group, which creates strategies for customer engagement and experiences, talked about creating “cross-over spaces”, where “art, music and good food – and not just food – create hubs where people feel they are part of something”.  It is about “co-creating”, he said, and “having people participate in what we create”.

The Leisure: Re-enchant the City panel also included TJ Hart of Merlin Entertainments and Pleun Van Dalen of Dutch Wheels, and moderator Charles Reed of Blooloop.  Other issues discussed were:

The private art sector as occupiers – Fotografiska and Hauser & Wirth

Private art organisations are also rising up to create new places and destinations, whether as part of the urban fabric and/or tourism infrastructure. Very often they attract a global audience.

Stockholm-based and privately owned Fotografiska, the “world’s largest photography museum,  is opening this winter in New York City, at 281 Park Avenue South. The six-storey venue, owned by Aby Rosen, said to be a keen art collector himself, also offers food and drink, and an events space, like Fotografiska in Stockholm.

Meanwhile, Fotografiska London is on its way in Derwent London’s White Chapel Building in Aldgate.  An opening date for the self-styled museum is yet to be announced.  The eight-story building is predominantly offices, and is located across the street from the public arts destination, the Whitechapel Gallery.

In Menorca, the Zurich-founded Hauser & Wirth gallery is due to open Hauser & Wirth Menorca in 2020, in a refurbished historic building on the Isla del Rey in Mahon port. The centre will offer exhibitions, education programmes, gardens, a shop and a restaurant. It will be modelled on Hauser & Wirth Somerset in the UK, which attracts over 650,000 visitors a year.

In Shakespeare’s As You Like It, the nobleman Melancholy Jacques says to Duke Senior: “All the world’s a stage”. In real estate, we could say: “All the built environment is a stage.”