Will Autonomous Vehicles really be beneficial for real estate?

Or might autonomous vehicles of all kinds, be they for transport or advertising, reduce the location premium for Real Estate in urban areas?
By Frank Karako on January 31, 2020 0 Comments

Advances in autonomous vehicle technology will contribute to significant cost reductions in transport and vehicle usage, causing a shift in the highest and most economic use of roadways in and around dense urban centres. Real estate values have long been influenced by transport costs, with the highest and best use of real estate being impacted by a concept known to urban economists as the bid-rent curve. At its core, this concept results in a location premium being a key factor for real estate values in central areas due to transportation costs contributing a significant amount toward the total cost of doing business for many business operations. However, at the same time that autonomous vehicles reduce the relevance of transportation costs in a manner that effectively reduces the location premium, the potential for an unprecedented nuisance from autonomous vehicles could effectively create a location discount in dense urban areas. This will be the natural result of the highest and best use of roadways in dense urban areas shifting towards vehicles operated for the express purpose of generating business and sales to include advertisements and mobile vending machines.

If we examine public transit costs in some of the major urban areas in the United States, it might appear this cost is already negligible when considered as an expense item expressed in dollars. If this is true, why does it seem that a significant location premium remains in certain central areas? Perhaps this is because the real transportation cost might better be considered in terms of both dollars and time, with the latter playing a significant role in assessing the true cost. Consider an individual who saves two hours each workday commuting rather than taking public transit while incurring a total transportation operating expense of $1000 USD/month, which equates to approximately $46.50 USD per workday or a mere $23.25 USD per hour saved, even if public transit was free.* The ability for an individual to reduce the total monthly cost of operating a personal auto to less than $1000 results in being able to “buy-back” lost time at an even lower rate. While the value of time over transportation cost is obvious to most high-income earners, it can be seen how even hourly employees, especially those trying to work more than eight hours per day, can come out ahead when factoring the time cost of transport.

This brings us to perhaps the most exciting aspect of autonomous vehicles after decreasing fatalities and injuries associated with vehicle accidents — the implied promise to give us back more time in our days. In fact, it is the man-hours that driving requires that effectively throttles the quantity of vehicles on the road. Could the allure of all but eliminating the human time cost involved suddenly make it feasible to scale exponentially the operation of a large fleet of vehicles? If the decision to place or keep a vehicle in service on the road is reduced to purely a dollar amount, the question then becomes one of return on investment for that operating cost. In fact, Adam Millard-Ball, transportation planner and associate professor at the University of California, Santa Cruz recently predicted a similar nuisance after using game theory and a traffic micro-simulation model to examine the potential havoc of autonomous vehicles. In his study, Millard-Ball was concerned with excessive grid-lock resulting from autonomous vehicles cruising around to avoid paying hefty downtown parking fees.

Opportunity to take to the roadways

The elimination of the man-hours cost of operating vehicles and the overall reduction of cruising costs to negligible levels has the makings of an entrepreneurial marketer’s dream. In fact, it would appear that companies like Do It Outdoors have already determined that deploying advertisements to the roadways is a viable business opportunity even with the cost of employing human drivers. The profitability of the business model is likely to increase exponentially considering that Millard-Ball calculated the cruising costs for autonomous vehicles at about $0.50 an hour, even when factoring in electricity, depreciation, wear and tear, and maintenance. 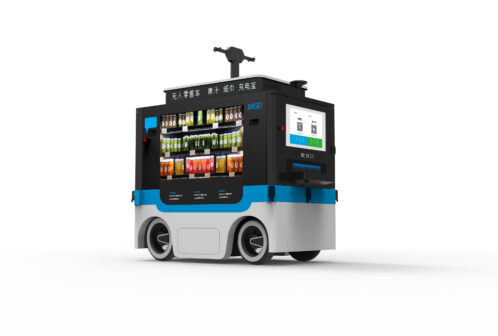 In 2018, PerceptIn introduced what was effectively a robotic billboard/vending machine, threatening not only to disrupt the roadways, but the marketing and retail spaces as well. PerceptIn was co-founded by University of California, Irvine alum Dr. Shaoshan Liu in 2016 and deployed its DragonFly Pod configured for autonomous mobility in Japan in early 2019. The company’s DragonFly Intelligent Advertising Vehicle (above, via manufacturer’s website) is said to be available for purchase in the Unites States for $40,000, with co-founder Liu claiming several traits that makes their vehicle stands out among competitors, including a production cost of less than $10,000. In March of 2019, PerceptIn showcased their product in Valencia, Spain at the Mobile World Congress (MWC) Barcelona. Even if the effective lifecycle of this mobile vending machine was only 2 years before obsolescence or government intervention effectively throttled them, a marketing agency could potentially deploy these for 18 hours/day at less than $65/day.

Although the introduction of autonomous vehicles will have various impacts on commercial real estate, the overall impact on transportation costs will create a shift in the highest and best economic use of roadways in and around dense urban centres. When market forces in search of equilibrium find increasing returns by placing more vehicles into service in dense urban areas, the resulting roadway congestion created by autonomous commercial vehicles has the potential to effectively reduce the productivity of urban areas and consequently the location premium enjoyed by real estate in these areas. Ultimately, autonomous vehicles will not only have a significant impact on the highest and best uses of real estate, but will disrupt the uses of the real estate that currently serves as roadways in and around our urban areas.

Frank Karako is an MSRE Candidate at the University of San Diego School of Business.