On Monday 9th December, MIPIM Proptech launched the MIPIM PropTech Europe Tour. A unique transcontinental series of meetings with real estate professionals intended to take the pulse of innovation across the industry in preparation for MIPIM PropTech Europe in spring 2020 in Paris.
By Impulse Partners on December 20, 2019 0 Comments

The whole MIPIM PropTech Europe Tour is under the singular motto: ‘Innovation, So What?’ The European real estate industry has been continuously talking about innovation for the past 3 or 4 years. Proptech start-ups have grown all over Europe, trying to disrupt a quite traditional sector, while corporates have launched numerous open innovation programmes. But beyond these programmes, widely visible and promoted outside the corporation, what does ‘innovation’ really stand for in the transformation of a real estate company? What does it take for a real estate developer, a law firm, a real estate broker or an asset owner to innovate and adapt in the new digital era? This is the challenging question that will be asked, and hopefully answered, during the MIPIM PropTech Europe Tour.

Honour where honour is due – the very first stop of the European tour was in London. Even if Brexit might question the future of the city, London has indeed been at the forefront of proptech innovation in recent years. Nowhere else in the world has such a vibrant and dynamic community of start-ups, VCs and corporates from the real estate industry been promoting the radical transformation of real estate from a square feet delivery industry to a services and experiences provider. London has thus been the leader in the development of coworking spaces, totalling as much coworking space as New York, Hong Kong and Paris all together. This is also the case for the fast-growing co-living sector, which is booming in London more than everywhere else.

So it was logical that the first stop of the MIPIM Proptech Europe Tour was held last Monday at WeWork’s premises near London’s Waterloo Station. To address the challenging question ‘Innovation, So What?’, the floor was open to three great speakers and moderated by Emily Right from EG. Gaia Arzilli from HB Reavis, Rupert Parker from Avison Young and Scott Taylor from Lendlease shared their views on innovation, promotion and dissemination within the real estate corporation, and here are a few takeaways one could profitably think carefully about.

It has been shown with what great energy real estate corporates have adopted the habits of innovative communities to promote start-ups and innovation from within their organisations. Hackathons, pitch contests and other creative workshops are now quite common in the industry. One might question the real benefit of such events for both start-ups and corporates, but Gaia Arzilli proved how HB Reavis managed to make real impact with the organisation of such meetings. The last pitch session she organised, named ‘Venture into proptech’, was conceived as a contest in which start-ups competed to gain a paid pilot with the company. Going further than the preliminary acculturation events that they used to be, pitch sessions in the industry are now becoming a real entry gate for actual and properly financed collaborations between start-ups and corporates. This is a notable step forward for everyone. 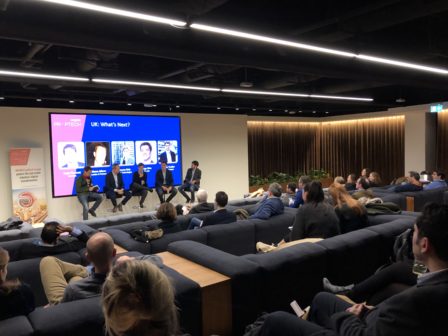 But engaging collaboration with start-ups is only a first step for large corporates. Indeed, innovation cannot be exclusively for a tiny vanguard of convinced individuals taking part in every open innovation event within the organisation, while the rest of the company is focusing on business as usual. To be successful, innovation must be everybody’s concern. How then can we infuse this innovative spirit in a whole company? Rupert Parker explained it was essentially a question of structure and culture.

Firstly, the structure is proper leadership, which is necessary to show the way and to clearly establish that innovation has to evolve from an ancillary support function to reach the core of the elaboration of the strategy.

Secondly, establishing a culture of innovation is probably one of the most critical points. And contrary to what organisations tend to do, it is not a question of educating people on how to innovate but mostly of encouraging people to disclose their ideas – even the apparently silly ones – and to try things, acknowledging to collaborators that failure is possible and even welcome within the organisation. Establishing a culture of innovation has thus more to do with arousing desire than with striving ??? to educate. To some extent, start-up collaboration – at every level of the company – can be a good opportunity to arouse people’s desire to innovate.

Finally, considering this question of dissemination of an innovation culture within an organisation, we can keep in mind the image of the tech adoption curve. Every new technology has its early adopters and the challenge for its promoters is to convince the late adopters to step onto the train. It is the same way for the spirit of innovation in a real estate company. It is not just about talking to early innovators only. Time has come to go further than the limited and demonstrative collaborations with start-ups, whose solutions are implemented on only very few projects. Time has come for an industrialisation and a generalisation of efficient models and solutions. This requires all the collaborators in this movement to stick together.

Chief innovation officers from all real estate companies should keep in mind this warning given by Gaia Arzilli on the MIPIM Proptech Europe Tour:  if you can’t explain to your 5-year-old girl or to your father what you really do in your job, you won’t be able to convince your whole company that it is worth changing habits and transforming an industry.

Going back to basics and giving sense to every decision are probably two keys for the next move in proptech innovation. These are interesting subjects to look at during the next stops of the MIPIM Proptech Europe Tour, and particularly in Paris in January.