WinSun Global is leading the development and expansion of 3D printing for the building industry and they aim to provide 3D printing technology to developing countries.
By Nicholas Fountain on November 24, 2015 0 Comments

By now, we have all heard about the amazing, innovative, and often times efficient capabilities of 3D printing technology. As this technology has drastically improved since its inception, it is now being applied in larger scale projects and applications. Specifically, the ability to 3D print functional apartment buildings and single-family dwellings is now a reality.

The Chinese company, WinSun Decoration Design Engineering Co., is leading the development and expansion of 3D printing for the building industry. The buildings are constructed in various pieces using a large scale printing unit, and utilizing a material consisting of glass fibers, steel, cement, recycled construction waste and hardening agents. (see www.archdaily.com ) Through this process, WinSun is able to create an inexpensive and functional final product, resembling traditional prefabricated structures, but eliminating many of the associated costs. 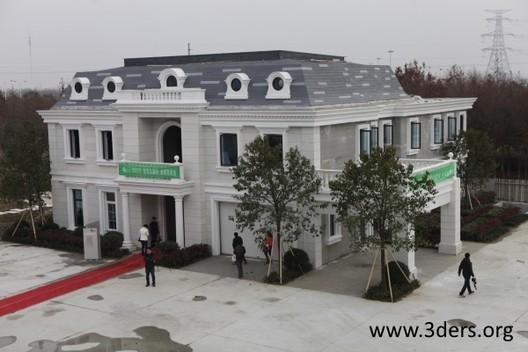 A WinSun 3D printed building on display at the Suzhou Industrial Park in Jiangsu province, China.

Is this feasible in markets like the United States that require buildings to be inspected and approved in stages? For example, after structural systems are erected, the electrical and plumbing are typically put in and inspected. Then final wall finishing is allowed. Is it possible to build a complete wall with everything required and get by this traditional piece meal approach to construction?

Before the final assembly of the various printed pieces of structure, the building components could be inspected in a factory and then again on site. But it is not clear if local building code regulators would accept such a process. It could be that the technology has far eclipsed the regulatory system aimed at producing safe and healthy buildings.

Pictured below is an example of a section of the final product at a WinSun factory. 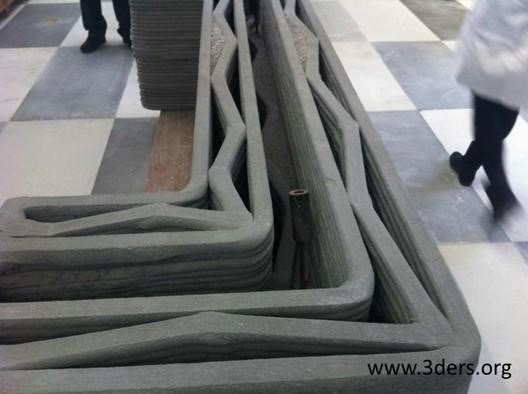 The Chief engineer of China Construction No.8 Engineering Bureau, Ma Rongquan explained: “These two houses are in full compliance with the relevant national standards. It is safe, reliable, and features a good integration of architecture and decoration. But as there is no specific national standard for 3D printing architecture, we need to revise and improve such a standard for the future.” (www.archdaily.com)
Chinese building codes and standards of quality differ greatly from American and European standards, but will the technology remain cost effective if held to the rigorous building standards and codes of the developed world? 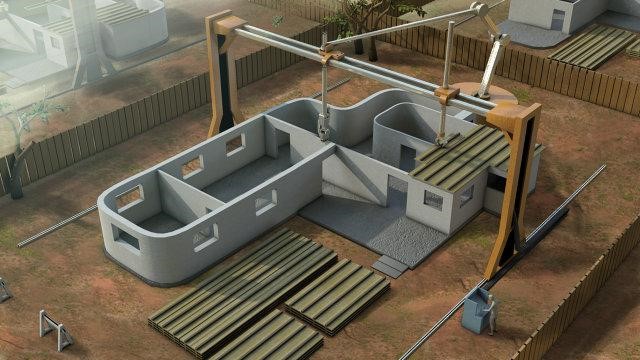 Pictured above, is a concept image of a 3D printed building in its assembly phase.

This technology is in use and developments are underway around the globe in places such as Dubai, UAE (engadget.com), Egypt, whose government recently purchased over 20,000 structures from WinSun, the Netherlands (www.sustainability.autodesk.com), and various other places where applications of the technology are being explored. Providing inexpensive, relatively high quality housing in developing countries is a main target of WinSun Global at the moment, particularly bringing the technology to regions in Africa and the Middle East.

Will this technology emerge as a major player in traditional, high-end construction markets? The timing of that, is hard to gauge and project, but it is certainly a way to build to high specifications and with lower costs. One could imagine an entire village of less expensive housing where most of the designs are a little different, rather than looking like the homogenous neighborhoods of existing public housing projects.

As illustrated by advancements in 3D printing in other industries; for example in the aerospace and aviation sectors. “NASA for instance prints combustion chamber liners using selective laser melting and as of march 2015 the FAA cleared GE Aviation’s first 3D printed jet engine part to fly: a laser sintered housing for a compressor inlet temperature sensor.” (www.3Dprinting.com) 3D printing applications range from simple and unregulated, to extremely complex and highly regulated. The possibilities and quality and seemingly endless.

As technology improves, the demand for it rise. The 3D printing of buildings is in its infantile development stage. It is an untested palate for designers and construction firms. What type of regulations, inspection processes, and adaptations of building codes will be needed to accommodate the 3D printed building boom? We will have to wait and see as this very exciting technology carves its way into the building industry. Significant advances in design and technology are sure to come. 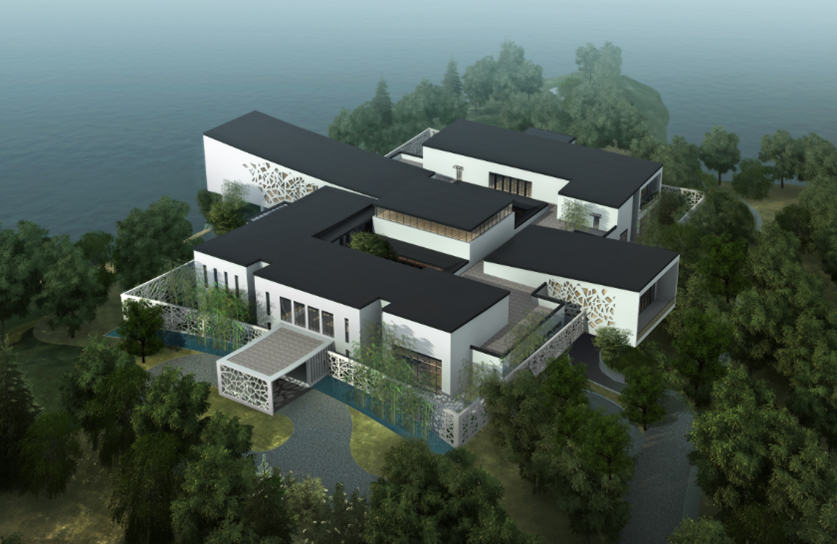 A concept design from WinSun, that may someday soon be a reality for 3D printed construction technology.

A Maine native, and long time Colorado resident, Nicholas is currently pursuing his Masters of Science in Real Estate at University of San Diego.  With previous experience in outdoor/recreational management, residential property management, and extensive world travel he is interested in pursuing a career focused on land acquisitions, conservation, and sustainable development, complimenting his deep love and commitment to nature and outdoor pursuits.