This morning several of the major industry leaders convened to discuss the current state of the commercial real estate debt market. They eventually covered the gamut and gave incredible insights on both the debt and equity sides.  To kick things off, Stephen Renna, CEO of the CRE Finance Council, outlined a few statistics and facts to explain how rapidly the market has changed since the Great Recession.  Key items of note included: 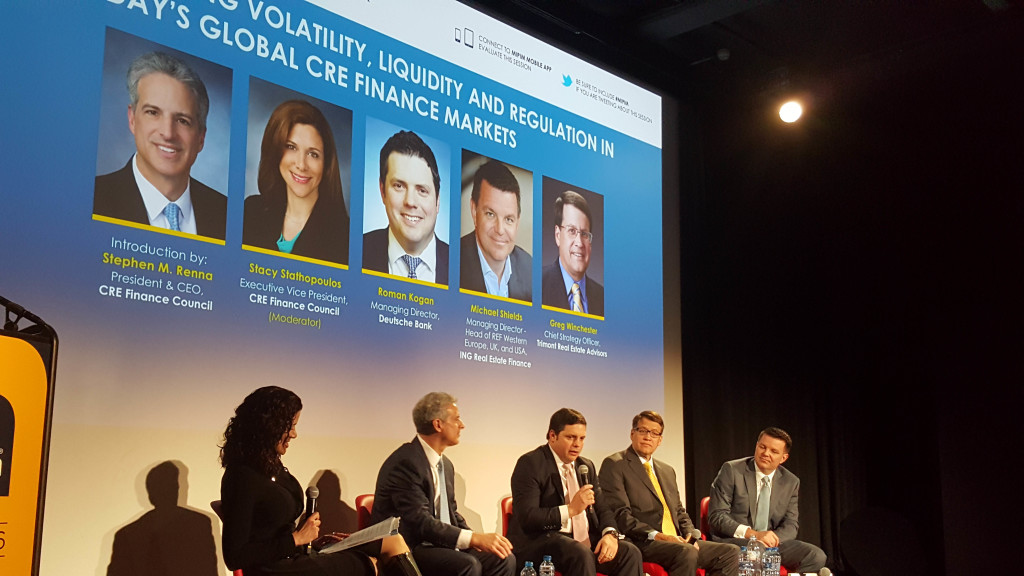 On the debt side in particular the panel focused on Commercial Mortgage Backed Securities (CMBS) slowing down, which was mostly attributed to the fact that many will be reaching maturity in 2017.  Mr. Renna also noted that insurance companies have lended more than ever in the US, but not near enough to cover the gap in CMBS.  In particular it was noted that we might see some secondary market defaults, and today’s low LTVs combined with low CMBS are brining a huge increase of mezzanine capital. 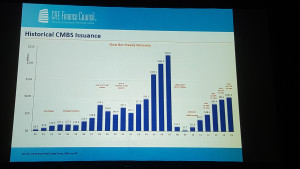 Stacy Stathopoulos, EVP of the CRE Finance Council and moderator asked the panel to discuss regulation, and what the challengers are.  “It’s really whether you are a regulated lender or non-regulated lender,” Mr Renna was quick to point out, specifically noting that because of Dodd-Frank, “US banks are feeling the pain of lending.”  He added that the new thresholds for capital being required are causing difficulty and that this stress for the banks and capital markets are creating opportunities for non-regulated lenders, specifically the rise in mezzanine capital.  Mr. Winchester, Chief Strategy Officer of Trimont concurred that “the proliferation of the mezzanine business is somewhat a product of the new regulations.” Mr. Renna added that, “the fundamental in the US are strong,” but cautioned that this “debt drives valuation.” Roman Kogan of Deutsche Bank was quick to confer, adding that, “the worrisome factor is that values should be driven by fundamentals.” He also cautioned, “it was a leverage driven cycle that led up to 2007 and we don’t want to see that happen again.” From an international perspective Michael Shields of ING pointed out that, “after the crisis regional regulators really made it difficult to pool across borders.” He also added that they’ve done two deals that have had mezzanine financing in Europe, but in the US, almost every single borrower has mezzanine financing.

An additional hot topic that couldn’t be passed by was negative interest rates.  Moderator Stacy Stathopoulos acknowledged the European Central Bank (ECB) just cut rates below zero and asked the panel the anticipated impacts?  Mr. Shields noted the sizeable amounts being held at the ECB and said its going to force banks to get the money out but noted, “leverage is not being pushed which suggests a more disciplined market than in the prior decade.”  He also added, “I’m not really concerned with debt fueling a bubble, its really not that profitable to do a deal over 65% leverage” and “our clients are not asking for more than 65% LTV, the book has never been this strong.”  He did however note that there’s “equity risk” out there.  Mr. Winchester pointed out that investors should also be concerned with increasing velocity of lending and that, “in the US we continue to see an increase in foreign capital, with many just looking for preservation of capital.” All speakers suggested that the new lower LTVs are going to make any downturns safer for the lenders.

In wrapping up the session, moderator Stacy Staphopoulos asked if prices have peaked and where are we in the cycle? Going first Mr. Winchester said he had poled his asset managers and that, if looking at a clock, 12 is the peak and 6 is the bottom, the average consensus is that its 10 and headed toward 11.  He added however that some secondary markets are still in recovery mode.  Mr. Renna discussed the large amount of “dry powder” may also indicate that some investors are concerned we are at the top of a cycle and added that most investors seem to be taking a cautious wait and see approach, watching the elections, the Brexit and all economic indicators.  This sentiment seemed to be shared among the panel.

The Ector Group is a family of professionals with a deep understanding and history of residential real estate. With backgrounds in construction, real estate and property management they are able to offer theiur clients a variety of services and comprehensively address their real estate needs.