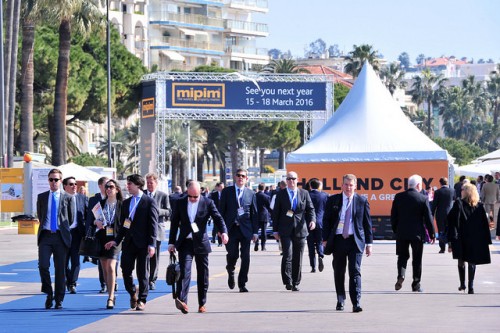 "Nothing prepared me for what was certainly the largest networking event I have ever attended." Thoughts from Melani King, a MIPIM first-timer...
By Johannah Cantwell on March 18, 2015 0 Comments

Having never been to MIPIM before, I was not really sure what to expect. I had heard rumours of the miles that are walked, the sea of suits and the volume of business cards that fly out of your hand before you can scrabble around to find more. However I am not sure even these very visual insights conjured up by MIPIM veterans prepared me for what was certainly the largest networking event I have ever attended.

Walking along La Croisette that first morning in the direction of MIPIM Mecca, that is- the Palais des Festivals, the sun was shining and the growing intensity of pedestrians buzzed as delegates made their way to registration. As the crowds started to build, holiday-makers with maps and selfie-sticks  (having clearly picked the wrong week for their relaxed, off-season sight-seeing trip to the French Riveria) made way, quite literally, for an ocean of suited men in 50 shades of blue. The navy crowd was polka-dotted with the odd female attendee, often wearing a burst of colour determined to stand out amongst their male counterparts. At one point I noticed a suited gentleman on a Segway weaving his way in between the hoards. No surprise really given the mileage covered at MIPIM. A client having worn a pedometer, revealed later that evening that he had walked 21kms in the first 12 hours!

Once inside the bunker, the scale and enormity of what MIPIM promises hits home. The London Stand itself was a welcome microcosm of this potential and once outside on the deck, the opportunity for instant networking presents itself. The common goal of building and maintaining relationships whilst gathering an intense level of knowledge spreads throughout the crowd while the effervescent hum of voices crescendos.

The London models themselves render the stand a visual treat. For someone grasping the edges of insight into what the London skyline will look like in ten and twenty years, these tangible structures of inspired investment and design were a genuine feast for the eyes; the tangible context of such grand schemes laid out before us in perfect form clearly creating excitement amongst voyeurs and exhibitors alike.

As the sun goes down each evening at MIPIM, the mood changes slightly and whilst talk of shop does not abate, conversation becomes that little more relaxed in the presence of a much deserved nibble and refreshment. With the pavement outside the institution that is Cafe Roma heaving, invitations to breakfasts, lunches and receptions are free-flowing should business affinity be established between strangers.

Having been initially unsure of the value our business would gain from attending MIPIM, I can genuinely say I very much believe it is a worthwhile event for anyone with a remote business interest in the property market. Preparation is key though and it soon becomes clear that whilst you must leave space in the itinerary for an extended spontaneous rendez-vous, the opportunity to meet as many contacts in the industry as you can should not be bypassed through an absence of organisation.

Whilst I did literally run out of business cards around 9pm on Thursday evening and having collected just as many as I had given out, it is probably still a little too early to grasp the true impact of MIPIM on business just yet. Certainly relationships with existing clients were consolidated in an environment that all but encouraged growth and rapport. Nonetheless, I am assured that through leads exchanged and referred on, MIPIM can bear fruit unexpectedly for months after the event by all accounts. Ultimately however, the tangible results of MIPIM seem to be in the follow up as much as attendance in itself. Maximising each opportunity presented in Cannes to its full potential back at home is where the true value lies. It would therefore be remiss of me not to add at this point, if I met you on the Med, then please do stay in touch. If we haven’t yet been introduced, then don’t be shy and please do look me up.

Melani King is a technical recruitment professional with over 12 years’ experience in the construction sector currently working  for Amida based in London. Amida are recruitment specialists in the built environment recruiting across the property, construction and engineering sectors www.amida-recruit.com. Follow Melani on Twitter @king_melani or connect with her on LinkedIn.