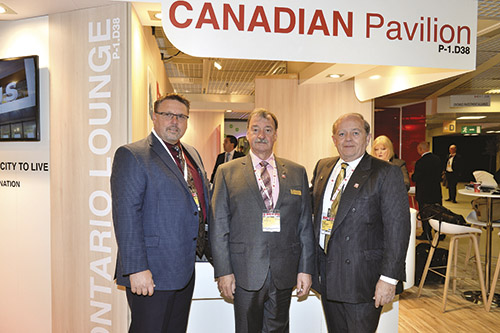 Canada consistently comes to MIPIM with the geographically widest spread of delegates of all the countries attending.
By Graham Parker on March 20, 2015 0 Comments

Parts of Canada have been attending MIPIM for a while now. The city of Montreal celebrated ten consecutive years this year. Other municipalities and companies have come less frequently. But the theme throughout Canada’s times at MIPIM has always been constant: come quietly; do some good business; make some useful contacts; deepen international understanding of Canadian business assets; broaden international knowledge of Canadian projects; and go home well satisfied to come again another time.

Among key Canadian business assets are the country’s banks, international investors at MIPIM learnt. Having no historical exposure to high levels of bad risk – unlike their counterparts south of the 49th parallel – Canadian banks were relatively immune to the recent economic crisis and came through undamaged, both in image and vault.

Regular attendance to the market is by both anglophone and francophone organisations. In a speech at the “maple in the snow” ceremony outside the Palais, Reed Midem’s Paul Zilk noted that Canada consistently comes to MIPIM with the geographically widest spread of delegates of all the countries attending. The same was true this year, with representation from Edmonton in the west to Nova Scotia in the east.

“Maple in the snow” was brought to MIPIM for the first time this year. The recipe – and result – for this originally Quebecois, and now entirely Canadian, speciality was demonstrated outside the Palais on MIPIM’s Tuesday.

Take the sweet sap from the maple tree – maple syrup – boil it and then pour it over fresh snow – or in this case crushed ice. Result: “maple on the snow”. Then devour it.

The city of Montreal promoted the opportunities to international investors of the redevelopment of the 43 ha Blue Bonnets Raceway. This former horseracing and harness-racing track on the western side of the city is now derelict. The redevelopment envisages between 3,500 and 5,000 housing units, together with retail and offices. It also represents an unusual opportunity in the city to undertake a complete integrated and masterplanned development.

This year saw a Canadian Pavilion for the first time. This housed civic representatives from Ontario, all seeing MIPIM as a way of promoting opportunities to a wider international audience.

Robert Wilhelm of Perth County, Roger Anderson of Durham Municipality and Ken Hewitt of Haldimand County, all in southern Ontario, said they see MIPIM as a way of establishing a greater presence on the international stage. With significantly cheaper land prices than nearby cities the mayors are confident that the region has good opportunities for growth looking ahead 10-15 years.

Top Photo: Ken Hewitt of Haldimand County (left) with Robert Wilhelm of Perth County and Roger Anderson of the Municipality of Durham, MIPIM 2015