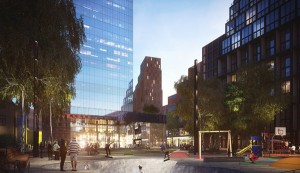 Tellus Tower is a residential property that will be built in the trendy quarters of Telefonplan in Stockholm’s Creative District, an inner suburb of Stockholm. The area has excellent links into the city centre via subway and buses and is the fastest growing part of Stockholm with a well-known creative and progressive local culture.

Tellus Tower, this spectacular building, will become one of Stockholm’s most exciting landmarks and the 237-metre building, with 75 storeys, will house 700 apartments optimally planned for 1-2 people, the size that best matches expected demand from tomorrow’s Stockholmers.

Construction is planned to start in 2016 and be completed in 2019. Tellus Tower is designed by architect Gert Wingårdh and the Interior concept by Gary Chang, world famous designer, known for his space efficient solutions.
This project was initiated as part of SSM’s ambition to better meet the requirements of increasing urbanisation and help to solve the current housing shortage throughout the Stockholm region. In its 20-year history, SSM has been a key player in the development of residential property with a large number of apartments in production and being planned.