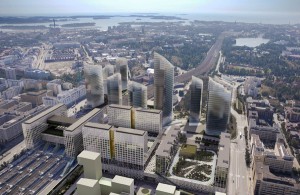 Today’s Pasila is characterized by media operations, events and conventions. In the future, Pasila as a major hub for business, commerce and transport will be the second city centre of Helsinki.

Pasila is already home to a large number of Finnish corporations, offices of multinational businesses and City and State agencies. More than one million square metres of new business premise and commercial space will be built in Pasila over the next few decades to accommodate more than 50,000 jobs.

The re-development of Pasila will start from Tripla – three blocks in the Pasila centre – to be built around the current Pasila railway station by the end of the current decade. The second stage of the development will comprise the Railyard residential and office area and the third stage will involve the Tower area containing residential, office and commercial space.

Tripla will be Pasila’s hub for commerce, culture and transport. The blocks will include offices, a shopping centre, residences, a hotel and a major public transport hub with local and long distance trains, tram and bus connections and in the future also a metro station.
Pasila will meet the criteria of sustainable development. Fluent transport infrastructure including rails, roads, pedestrian and bicycle routes will further strengthen Pasila’s role as a new urban centre.