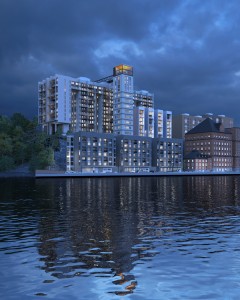 A new city district is emerging on the island of Kvarnholmen, just outside Stockholm, with space for 3,000 new residences, schools and shops in a culturally historical environment.

Kvarnholmen, the former site of silo plants and the large Tre Kronor mill, was historically an important industrial area for food production that supplied Sweden with bread, flour and other food products. This previously closed-off industrial area is now being transformed into an open, living neighbourhood. The 225-flat Stockholm Lighthouse, created by Sweco, is one of the new residential projects planned for the area. With a nod to Kvarnholmen’s history, the buildings are reminiscent in design and dimension of the silos that used to grace the site. An imposing tower inspired by the former Torktorn (drying tower) – crowned by an illuminated observation room – recalls a light beacon at the harbour entrance and gave the project its name. Visually, the building will be a new landmark at the entrance to our beautiful capital city, Stockholm.