The dawn of a new era for real estate in Japan

We put the spotlight on real estate in Japan, host of the Rugby World Cup 2019 and the Olympic & Paralympic Games Tokyo 2020.
By Georgina Power on September 23, 2019 0 Comments

The Rugby World Cup opened last Friday in Tokyo Stadium, just over 300 days before the start of Japan’s next big sporting event – the Olympic & Paralympic Games Tokyo 2020. With two major events over the course of 12 months, and the Japanese city of Nagoya hosting the 2026 Asian Games, the spotlight is on the world’s third largest economy – a country of growing interest for international investors. Let’s take a special look at real estate in Japan! 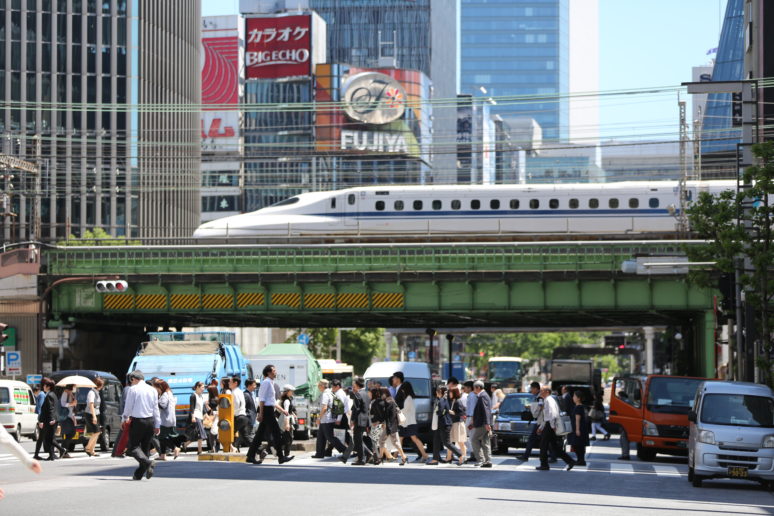 For Tokyo 2020, Japan will unveil the new Chuo Shinkansen train line using Maglev trains capable of travelling at speeds of up to 603km/h. The new line will cut the journey time from Tokyo to Nagoya to 40 minutes. Commercial operations are due to start in 2027, with a later extension to Osaka.

“This will create one mega region of 70 million people,” said Keiji Kamiyama, Inspector-General, Minister’s Secretariat,  Ministry of Land, Infrastructure, Transport & Tourism, who made the opening presentation at the MIPIM 2019 conference session, “Tokyo: the post-Olympic market”.

Investment transactions up 60% in Q2

The volume of commercial real estate investment transactions rose 60% year-on-year in the second quarter of 2019, according to CBRE.   This was the fourth highest second quarter total since CBRE started tracking the market in 2005.

Other summer headlines included Japan’s REIT prices reaching a near 12-year high as institutional investors piled in with the plunge of global bond yields and the growth of the Japanese economy by a healthy annualised 1.8% in the three months to June. 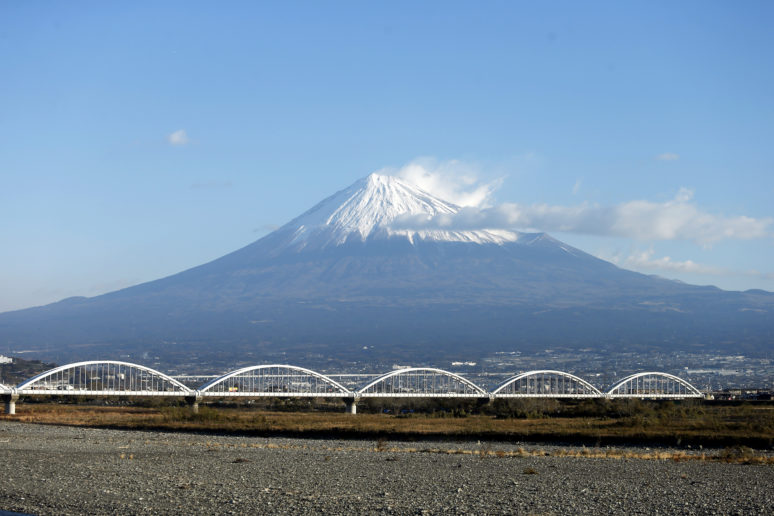 The start of the Reiwa era

This spring, Emperor Naruhito ascended to the Chrysanthemum Throne, marking a new era in Japan – the Reiwa era, which translates into English as ‘beautiful harmony’.

The emperor’s role is ceremonial, but his accession is seen as the start of a new, modern era for Japan.

At first glance, Japan may not appear dynamic:

Panel members of the MIPIM 2019 session on post-Olympic Tokyo, however, saw no risk of a downturn after the Games.

No investment is completely risk free, but if there were one, said a panel member, it would be the high level of leverage in the Japanese banking system, with an increase of over 60% in exposure to real estate since 2003.

Another point to note is the traditionally very closed Japanese real estate industry, where it is all about the long-term relationship.  “You have to find the right partner,” said Hideki Yano, President & CEO of Sumisho Realty Management Co Ltd, at a separate MIPIM session on Investment Trends in Asia.

The venues for the Tokyo 2020 Olympics are in two zones: the Heritage Zone, home to several iconic venues from the Tokyo 1964 Olympics; and the Tokyo Bay Zone, designed as a model for innovative urban development.

The timber-roofed, 60,000-seater Olympic Stadium by Japanese architect Kengo Kuma is officially due to open this December in Shinjuku ward, home to the world’s busiest train station, with 3.5 million passengers a day.

The Olympic Games provide the stage for a major urban rethink

The Olympic Village is on an 18-hectare site in the Harumi waterfront district in Chuo, where the two Olympic zones meet to form an infinity loop.

The Ariake Gymnastics Centre in the Tokyo Bay Area is one of the eight new Olympic venues.  Designed by Hidemichi Takahashi, the building will be turned into a convention centre once the Games are over.

Like with all Olympic Games since Barcelona, hosting the world’s most important sporting event provides the stage for a major urban rethink.

For Tokyo, it is part of the city’s long-term vision, Creating the Future, launched by the Tokyo Metropolitan Government a year after the city was selected as the Olympic host in 2013.

Tokyo on the rise: Toranomon-Azabudai

As well as the new Olympic Games venues,  the city skyline across all the city’s central wards is changing.

The area around Shibuya station – famous for its pedestrian crossing – is being redeveloped as a major international business hub.

Meanwhile, this August, Mori Building began constructing a 64-floor skyscraper, part of the US$5.5bn Toranomon-Azabudai project near the Roppongi district (top photo and below).  At 330 metres, the project’s Main Tower will be the highest in Tokyo. 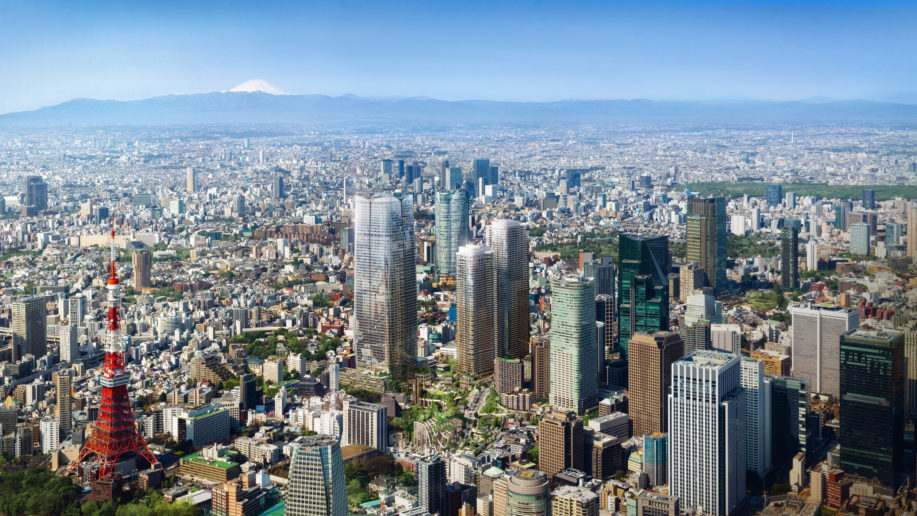 Toranomon-Azabudai will be a city in a city, offering over 860,000 sq m of mixed-use floorspace connected by underground walkway

The Toranomon-Azabudai project creates a city within a city. Located on a site of just over eight hectares, the project has  24,000 sq m of greenspace, including a 6,000 sq m central square.

The three skyscrapers – the Main Tower, and the West and East Towers – are designed by Pelli Clarke Pelli Architects, while Heatherwick Studio is designing the public space.

When it is completed in 2023, the project will offer 860,400 sq m of mixed-use floorspace connected by underground walkways.

It will include offices for around 20,000 workers; homes for 3,500 residents: a luxury hotel; fitness & spa venues: museums & art galleries; a medical centre; retail; a food market; restaurants; and the British School, the largest international school in Tokyo.

Japan welcomed a record 31 million foreign visitors in 2018.  The aim is to increase this to 40 million in the year of the Olympics, 2020.

Tourism is being looked at as a game changer in Japan.  As part of the strategy to boost tourism revenue, Japan is set to grant licences to three cities for the opening of integrated resorts (IRs), following the passing of a law last year to legalise casinos.

With the new IRs, CLSA, a Hong Kong-based capital markets and investment group, predicts that Japan will become the world’s third-biggest gaming centre, after Macau and the US.

The favoured contender for the first of the three initial licences is the port city of Osaka, where the new IR is planned to open ahead of the 2025 Osaka World Expo.  Japan’s second largest city, Yokohama, south of Tokyo, is another favourite, as well as the smaller regional cities of Hokkaido or Kyushu.

The Games of ‘automation theatre’

In the meantime, once the human feats of the Olympics arrive on our screens, viewers are also expected to be tuning in for the ‘automation theatre’, the spectacle of innovative tech, for which Japan is so well renowned.

The multilingual Arisa robot will help tourists find their way around the city; the world’s first human-made meteor shower is reported to fall from the heavens; 100km of heat-blocking road surfaces are set to cool the marathon runners; and autonomous vehicles will ferry the athletes to their venues … and the list goes on.  Any tickets going?