After a long history in prefab home building, modular construction is gaining traction in the commercial real estate sector.
By Brian Jacobs on January 10, 2020 0 Comments

What is Modular Construction?

Modular construction is the process where buildings are made up of individual sections (modules) that are constructed at an off-site controlled manufacturing facility and then assembled as components on-site at the final building location. As the modules are being produced at the manufacturing facility, the preparation work on the construction site, including grading, laying the foundation, and establishing utility connections, can be performed simultaneously. The modules are then delivered and set into place by cranes, making the final assembly as efficient as possible. Modular construction uses the same materials and adheres to the same codes and standards as traditional construction, but it can reduce production time by half and create significant cost savings.

Modular construction has its roots in the early 1800’s, when the first prefabricated home was constructed in London (and then shipped to Australia!). Modular then played a major role when builders used the method to meet the tremendous demand for housing in the United States during the California gold rush. Later, Sears Roebuck and Co. sold more than 500,000 prefabricated homes directly to consumers through its catalogue. A housing shortage after World War II also created a need for rapid delivery of new homes in the United States, and modular construction was heavily relied upon because of its efficiency, reduced costs, reduced waste, and time savings. Around the same time, the United Kingdom, Europe and Japan likewise used the modular process to address their housing and rebuilding needs.(1)

In the following decades, modular construction became increasingly popular around the world. The method has begun to gain serious traction in commercial real estate applications, including in hospitality, healthcare, industrial, education, multifamily, and more. As one source reports, “the modular and prefabricated building market is currently at a nascent stage when compared to traditional building construction; however, the market is developing rapidly and leading to increasing penetration of modular buildings within the construction sector.”

Because the modules are produced inside a controlled construction facility, externalities such as weather aren’t a problem.  Weather can warp wood, make masonry nearly impossible, and make traditional assembly a challenge. This controlled environment alleviates unforeseen costs and delays in the construction process. Modular parts, cut in a factory, will more accurately conform to design specifications making the final fit tighter with better insulation properties. 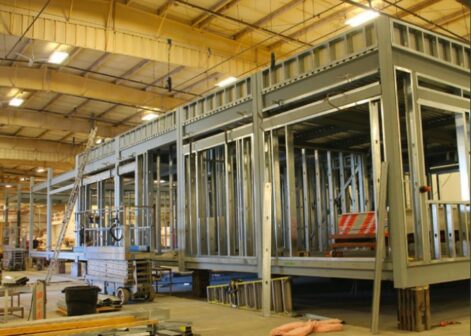 Another major challenge that persists in construction today is the shortage of skilled labour. The construction industry in the United States currently employs approximately 7.5 million people and has only a 3.2% unemployment rate, yet there are nearly 400,000 job openings.(2) And the unemployment rate for younger people (and males in particular) is much higher than the average for the industry.(2) Unfortunately, young workers are precisely the one who could fill the gap in the construction labour market, but they are apparently choosing not to do so. Further exacerbating the labour shortage, the existing construction workforce, filled with baby boomers, is beginning to age out and retire more rapidly than in prior decades. Modular construction can help address some of the uncertainty around this lack of available skilled labour – a modular builder would employ full-time workers at its facility, rather than the traditional model of using contractors that have to be retained on a project-by-project basis, making these jobs more appealing.

An additional benefit of modular construction is that it can reduce construction waste, by up to 77% according to one source.2 Offsite construction and delivery can also eliminate the number of trips to a development site, which can further reduce the carbon footprint of construction and establish a best practice for sustainable building.

New digital technologies, materials, and design capability have made modular construction much more appealing and have begun to eliminate the old perception that modular can only produce lesser quality prefab housing.(3)Today, builders can use modular construction to create beautiful projects that “focus on sustainability, aesthetics, and the higher end of the market.”

Modular construction is gaining traction across the globe. It’s estimated that the market will grow from $92.18 billion in 2018 to $130 billion in 2030. As for the commercial sector, it appears there will be rising demand for quick and affordable construction in healthcare, education industries and hospitality. Countries that are expected to contribute the most to overall global growth include the United States, Germany, Japan and China.  In fact, Japan has been a leader in modular construction since the 1980s.(4)

The two main drivers for modular construction are the increasing demand for new product and the availability and cost of labour. With these in mind, the areas where there may be significant opportunities are the west coast of the United States, the southern part of the United Kingdom, Australia’s East Coast, and Germany’s major cities. Indeed, any place that is densely populated and where space is limited, it seems modular will thrive.

One current project of interest is Marriott’s creation of the world’s tallest modular hotel, set to open in New York City in late 2020 (below). With modular construction, Marriott is able to complete one entire floor per day on the building. This is Marriott’s 32nd modular hotel. 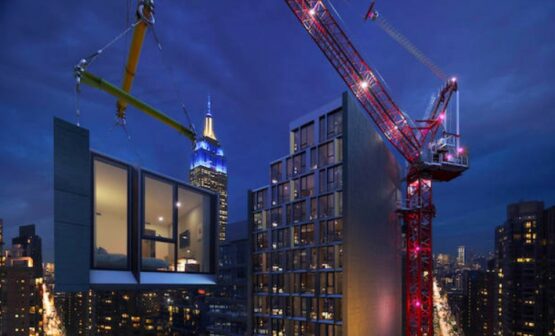 At a time when developers are continually met with challenges such as rising construction costs and a shortage of skilled labour, modular construction offers an attractive alternative to the traditional method. The recent developments in modular construction seem to point to a major disruption coming to the industry. According to Nick Campisano, CEO of Campisano Capital, a real estate and venture capital firm, modular construction will “trend towards nearly 100 percent market share of all large commercial projects” and “it is, without a doubt, the way of the future.”

It appears that the modular construction market will only continue to grow. Opportunities should abound, and those looking to capitalise on these changes should carefully watch this evolution to the construction industry as it unfolds.

Brian Jacobs is an attorney and a MSRE Candidate at the University of San Diego. Mr. Jacobs will be attending MIPIM and assisting with conference coverage