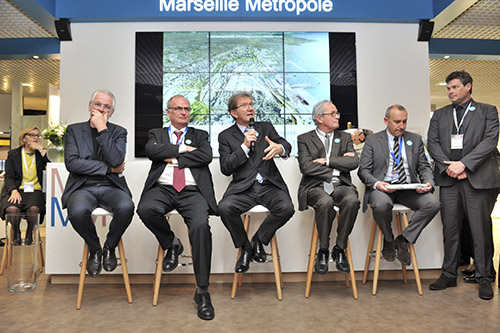 Housing shortages have become the major real estate challenges for many European cities. See how France deals with them.
By Graham Parker on March 23, 2015 0 Comments

The role of housing as a sort of lynchpin to urban regeneration is evident in large-scale developments across France, and some ambitious projects were on show at MIPIM 2015.

Nowhere more ambitious than Marseille, where 37 ha of former industrial and maritime space in the city’s Arenc sector will be redeveloped over the next three years into 1,800 homes.

The project is led by town planners Yves Lion and François Kern, with urban landscape architect Guerric Péré – in other words, the same team behind the latest addition to the 20-year-old Euroméditerranée waterfront development in Marseille. Euroméditerranée won the Best Urban Regeneration Project category at this year’s MIPIM Awards.

Elsewhere in Marseille is a development to deliver a new high-rise building, La Marseillaise, designed by Jean Nouvel, and the Ilot Allar block, a 58,000 sq m mixed-use scheme that will include the new headquarters of EDF as well as office, retail and yet more housing.

The agency was at MIPIM to promote three major developments designed to boost the area’s long term economic health and which will represent billions of euros of investment.

Top of the list is the Louvres & Puiseux eco-neighborhood. Prospective developers heard how this neighbourhood will be the biggest housing project in the north east district of the capital and will provide 3,300 dwellings over the next decade or so. Today the two component towns, Louvres and Puiseux, have a combined population of 10,000 but this will double by 2028.

“It is a very important project,” said Plaine de France EPA’s chief executive Damien Robert, who explained that there are 90,000 employees at the airport but accommodation is hard to find within a reasonable radius.

Such housing shortages have become the major real estate challenges for many European cities. But the supply/demand imbalance also partly explains why many institutional investors are increasing their allocations to residential and why some major property companies are willing to move up the risk curve and once again tackle large-scale development, including new housing.

Delegates at MIPIM heard how the Dutch residential sector is attracting record amounts of capital and how residential features prominently in a series of bold development projects in Turkey. They also learned a little more about Unibail-Rodamco’s new development agreement with the City of Hamburg to undertake Uberseequartier, the latest phase of HafenCity, which is Europe’s biggest inner city regeneration project.

The projects in Marseille and Paris may not match the scale of HafenCity – which pre-dates the global financial crisis and is surely Europe’s longest-running development – but they are all emblematic of renewed appetite for urban regeneration, and with it the need for more housing.