High-Rise Landscaping: Is it Sustainable and Feasible?

Can high-rise green buildings be sustainable and affordable for residents?
By Rodney Bruce on December 16, 2015 0 Comments

Green/Sustainable commercial projects are not new to the development community. But a new phenomenon in the High-Rise Landscaping arena has started to take shape on a global scale. Currently, one of the most notable projects, Bosco Verticale (“Vertical Forest”), was completed only three years ago, in Milan, Italy and designed by Stefano Boeri Architects. 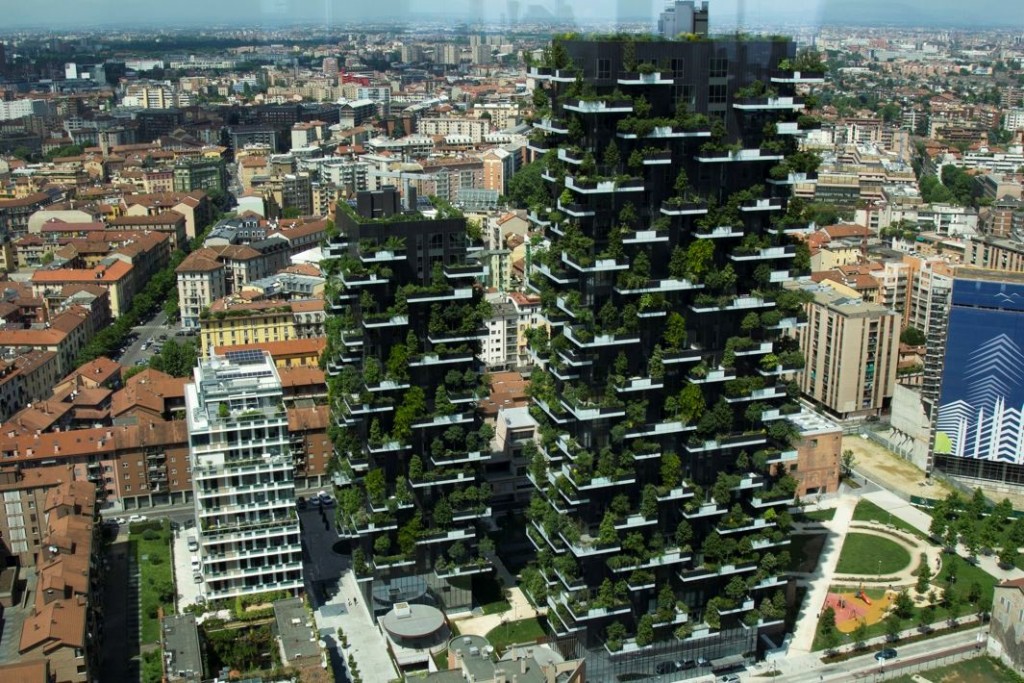 The two Bosco Verticale towers stand approximately 262-ft and 367-ft high, in a foot-print less than 21,000 square-feet. The vegetation consists of one-hundred different species of plants, 60% of which are native to Milan. Collectively, both buildings host approximately 20,000 plants with an incredibly dense layout in order to function as an outermost layer to the façade. But do dense vegetative projects, such as Bosco Verticale, make environmental and/or economic sense in other cities?

Additionally, adverse health effects, caused by inner city pollution, have been proven to last for years.Studies have shown vegetation to be natural filters and air quality enhancements for many of the common urban air pollutants such as nitrogen oxides, carbon monoxides, volatile organic compounds, and diesel exhaust gases.

Green roofs and vertical gardens are design features that have been incorporated into commercial buildings for years. According to greenroofs.org, cities such as Washington D.C, Philadelphia, and Chicago have collectively installed approximately 2.2m square feet of green roofs as of 2014.

This can be partially attributable to the increased roof life of green roofs. Deterioration of standard roofs occur on account of material stress on the roof skin, accelerated aging of waterproofing due to UV-radiation and high Ozone ratios. Drastic temperature fluctuations occurring within a 24-hr period also accelerate roof aging. According to the International Green Roof Association green roofs provide natural waterproofing, a protective bio-surface layer protects against the natural elements and varying temperature levels.

Moreover, building landscapes have been known to have higher thermal insulation values (increasing building energy efficiency), providing a heat shield and cooler temperatures for indoor residents, and reducing noise levels as might be the case with below traffic commotion.

High-Rise Landscaping is still relatively new to the design and development industries, thus lacking in many of the much needed financial research and analysis. However, a report produced by the General Services Administration (GSA) highlights many of the cost impacts associated with dense building vegetation for conditions such as green roofs. Key findings from the report found that installation to have a cost premiums ranging from $10.30-to-$12.50 depending on the square-foot area of landscape. Annual maintenance was found to have premiums ranging between $0.21-to-$0.31 with spring and winters being the most labor intensive season requiring the most amount of upkeep. At the same time there are savings in water retention basins during construction and energy from lower heating and cooling costs. 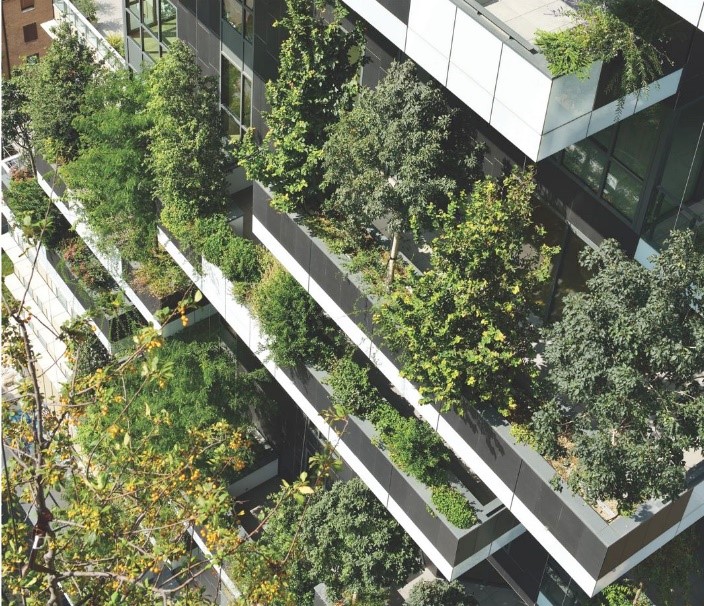 But can the multi-family development community pass these up-front cost premiums onto the residents or will the residents be willing to pay more rent while they pay less in utilities? Surveys performed by Strata Research and Multifamily Executive (MFE) explored what today’s renters are looking for in rental units.

In summarizing the findings, Briana Wright, an Associate at Pathfinder Partners (a Real Estate Investment firm), wrote in the most recent edition of The Pathfinder Report that “More and more people are embracing eco-consciousness as a lifestyle… when residents were asked about their preference for green features, energy efficient appliances was the top choice, with walkability and recycling following as second and third choices.” Survey results indicated that “77% of renters felt ‘green’ apartments were important. However, Briana also summarized that “Strata found that only 60% of respondents said they would maybe pay more for green features; MFE’s findings also revealed that the majority of renters are not keen to pay more for an eco-friendly apartment.”

Like any new and/or evolving industry, regulation follows innovation. An increased popularity of High-Rise Landscaping, among designers and developers, will inevitability result in increased local, regional, and national regulation. The industry can expect to navigate changes in Land-Use Plan or Zoning Codes, imposing bylaws that can mandate new projects incorporate vegetation landscapes into the developments, or adherence to new design guidelines requiring specific ecological performance values. But developers who decide to do good for the environment may find a payback in the long run and less need to adapt when new land use regulations are imposed. 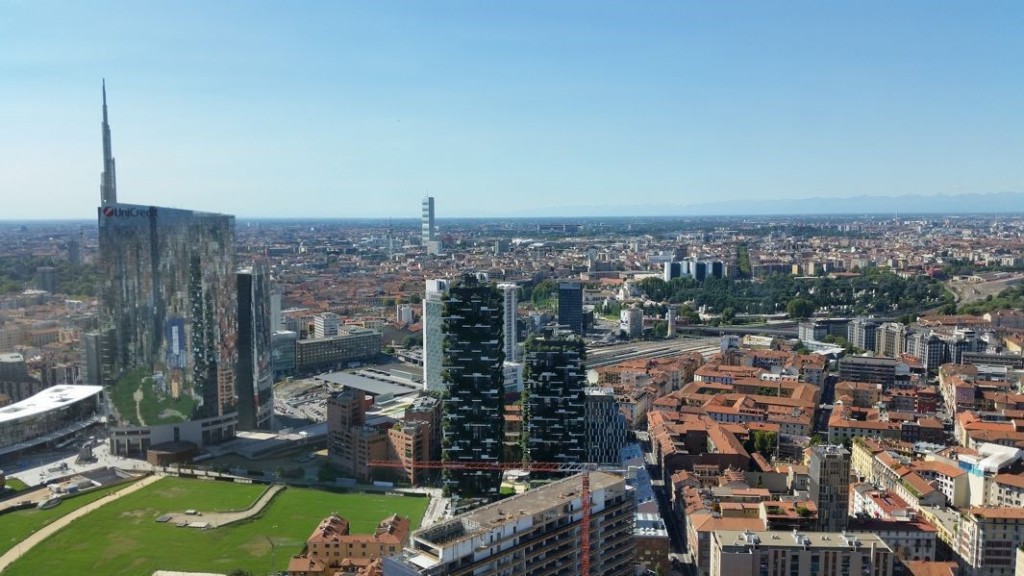 High-Rise Landscaping: Is There a Future in other Markets?

The visual impacts of buildings like Bosco Verticale cannot be undervalued. A natural botanical atmosphere, incorporated into living residences, have proven added benefits to both the residents and the commercial facility. Having evolved into more than vertical gardens, High-Rise Landscaping has the potential to change an entire cityscape.

But the added value comes at a cost to design, construction, and maintenance and education. The cost may be recouped in the long-term, but might be difficult to monetize from rental income. As of today, renter sentiments appear to be in alignment with this building product, but the reluctance to pay rent premiums creates a barrier for new green development leaders. Maybe it is time for developers to hire environmental landscape specialists, if you wish to be ahead of the curve?

Rodney Bruce (rbruce@sandiego.edu) is born and raised in San Diego, CA. He received his Bachelor of Science in Construction Management with a minor in Business from Northern Arizona University. After his undergraduate studies, Mr. Bruce spent the last several years in project management developing a professional career in the construction management industry having worked on large pubic improvement and commercial construction projects. Mr. Bruce is currently pursuing his MBA/MSRE, at the University of San Diego, where after he plans to establish himself as a professional real estate developer.