Trends and forecasts that investors should look out for in 2019.
By George Kachmazov on January 15, 2019 0 Comments

How are things going on the global real estate market? What future challenges does it face? International real estate plaftorm Tranio presents an overview of the main trends that investors can focus on today and for the next year.

Germany is ‘a safe haven’

Germany is still one of the most popular countries for international investors. According to the UN, the FDI flow into the German economy amounted to $34.7bn in 2017: twice as much as in 2016. The FDI stock in Germany was estimated at $931.3bn in 2017: 18% more than in 2016. The growth of this indicator has tripled over the past 20 years.

The German real estate market has the reputation of being a safe haven due to its economic stability – the country has enjoyed accelerating GDP growth over the past five years. Germany also benefits from a relative scarcity of residential property which is driving demand, and the nation has seen an influx of well-educated professionals that is boosting property prices.

According to consulting company PwC, in Q3 2017, commercial property investments in Germany were at a record high and reached €39.5bn, which is 20% more than investments made a year earlier. Most buyers are local investors (55%), followed by buyers from Europe (22%), North America (12.5%) and Asia (9%).

‘High demand for German real estate spurs higher prices and lower rental income. In search of higher returns, foreign investors are opting for value-added projects or looking to invest in smaller towns where the price per square metre is cheaper than other sought-after locations where the market is already heating up.’ 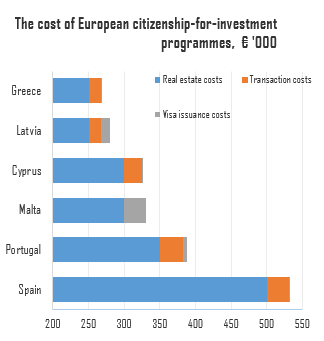 ‘The current low real estate prices and high demand contribute to higher returns for investors. Thus, the net yield on the short-term rent of a renovated city-centre apartment in Athens is 5-7% per annum vs 3% in most European capitals. Moreover, there is potential for real estate prices to grow 20-30% over the next 2-3 years.’

Malta, Cyprus in peak demand due to popular citizenship programmes

For the last several years, Malta and Cyprus have been issuing residence permits to foreign investors in exchange for investments in the countries. However, an eligible investor must own local real estate there: in Cyprus the investor’s property cost must be above €500,000 (or above €2mn. In this case there is no need to invest in other assets); in Malta an investor must either own a property above €350,000 or rent a property and pay above €16,000 p. a. over five years. The citizenship by investment schemes are popular among wealthy foreigners: since the launch of the programme, Malta has issued more than 550 passports to such applicants, and Cyprus, according to The Guardian, has issued more than 1000 passports in 2017 alone. 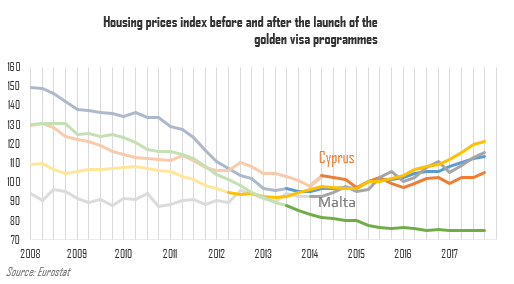 The post-crisis drop in property prices in Cyprus stopped simultaneously with the launch of the programme in 2014. According to The Telegraph, in 2017 the cost of apartments in Cyprus increased by 7.4%. Experts note a distinctive growth in the premium and ultra-premium property sectors. According to the PwC study, the cost of transactions in 2017 increased by 24% compared to 2016, while a third of real estate deals involved foreign buyers.

The price reduction in Malta also ended in 2013 – in the same year, the citizenship by investment programme was launched. As shown by a PwC survey conducted in January 2018, the said programme in Malta is one of the key drivers of demand for real estate. According to the National Statistical Office, Q1 2018 saw a 5% increase in real estate prices, on a year-on-year basis, and an 11% growth in a number of transactions made in Q1 2017 vs early 2016. According to statistics, participants of the programme in Malta prefer to rent apartments rather than to purchase them in 9 out of 10 cases. And if they buy, the average cost of the property is typically twice the minimum threshold. The cities of St. Julian’s and Sliema are the most popular locations among the programme participants. Here, real estate prices are rising the most, and 46% of real estate agents surveyed by PwC think so.

‘We saw sharply growing interest in the Cyprus citizenship programme in the third quarter of this year: the number of closed transactions has doubled. This could be due to a recent statement by the Cypriot authorities: they announced that security checks would be stepped up and the number of passports granted would be capped at 700 per year.’

Value-added projects are of interest

Yield reduction is a trend common in European real estate market: according to PwC experts, the property market yield decreased from 6% in 2009 to 4% in 2017. PwC quotes an investor as saying that today a 3% yield is considered to be a rather optimistic scenario: ‘Investors see these numbers achievable in Paris, Berlin and central London. However, these cities are a bit overheated, so you need to be very energetic to acquire an asset there.’ 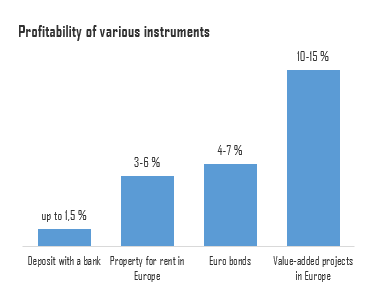 Investors are willing to take big risks to achieve the desired profitability —confirmed by 80% of PwC respondents. Value-added projects of construction and reconstruction bring 8%-12% per annum. Two-thirds of investors surveyed by PwC believe that redevelopment is the best way to acquire prime assets: in most cases, this means low-risk strategies based on skilful asset management and minor reconstruction of the property assets. At the same time, more and more investors are looking at development projects with interest as a lucrative opportunity to earn more.

‘In the German market, profitable quality properties are quickly sold to local buyers. Therefore, foreigners increasingly look into value-added projects: investors with a budget of up to €1mn provide developers with mezzanine loans at a fixed interest rate while those with capital above €1mn become equity partners and get profit after project completion.’

Housing affordability is the most important social challenge that will affect the real estate market in the near future. One of the ways to tackle it in large cities is micro-apartments, apartments with an area of 17-35m2 which are inexpensive due to their small floor area. Investors usually buy micro-apartments for renting them out to students, business travellers, young professionals and tourists. A growing number of one-person households and students also contribute to popularity of this type of real estate. According to Savills global real estate firm, in 2016 the value of transactions in the student housing sector in Germany exceeded the cost of all transactions made between 2009 and 2015.

According to the PwC survey respondents, logistics real estate topped the list of the most promising types of commercial properties. Investors note aggressive price increases and lower yields, but demand does not decrease as there is an extreme shortage of supply in the market. A particularly positive forecast is for warehouses on the outskirts of cities within the so-called ‘last mile’: they will store goods ordered online before delivering them to customers.

The growing popularity of co-working spaces is a new trend in the market featuring real estate as a service and tenants as customers. As noted in the PwC study, the interaction between tenants and property owners is becoming increasingly important: ‘The share of co-working, small companies, business incubators are growing. Requirements to flexibility of space, ability to divide it are becoming increasingly important.’ According to web portal Statista, the number of co-working facilities increased from 3 in 2005 to 15,500 in 2017, and in 2018, according to the forecasts, their number will grow to 18,900.

George Kachmazov is the founder and managing partner of Tranio.com, an international real estate broker with a catalogue of 110,000 listings and a network of 700 partners in over 65 countries. He is a real estate and investment expert, as well as a keynote speaker at many national and international property conferences. George regularly contributes to print and online media with insight on real estate trends and advice for first-time investors.