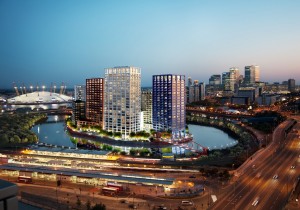 EcoWorld Ballymore is a joint venture between EcoWorld Investment and Ballymore Group – a deal secured in late 2014. EcoWorld Investment is a Malaysian-owned private company based in Britain. The £1.1 billion financing package was secured by EcoWorld Ballymore from two Malaysian headquartered banks, CIMB Bank Berhad and Maybank Investment Bank Berhad. Investment from these two banks is indicative of confidence in the delivery capabilities of both EcoWorld and Ballymore. The joint venture represents one of the most significant examples of foreign investment into the UK in the past year, and will see the development of three of the leading residential projects in London: London City Island, Embassy Gardens phase 2 and Wardian London.