What are the different typologies which complete the new normality of a socially distant world? Hepp's Anna Kulik and Argent LLP's Steven Kellett discuss
By Layla Khademi on July 9, 2020 0 Comments

This is a series of MIPIM Connect session reports from partner schools. In this post, University of San Diego reports on the Urban Living session. Watch this session and more on MIPIM Connect now!

On urban resiliency, Kellett said that, “we’ve had a bit of a brain melt in the last three generations where we’ve been obsessed with cars, and we’ve thrown all good principles and good design out of the window, and actually made some awful decisions in city planning. It’s just thinking about what good design is and sticking to that.”

Kulik and Kellett reimagined a world where uses in cities are not designated separate areas, as suggested by a century of zoning laws based on outdated assumptions. The cities who survive in these times are self-sufficient, precisely as a result of their mixed-uses and accessibility.

Kellett said that the future “15-minute city” design of Parisian neighborhoods, where all necessities are found within a 15-minute walking distance from homes, is the epitome of the design we need to see more of: “that is sticking to good design – of making sure you have all your amenities within a 15-minute radius. Whether that’s people you want to see, places you want to work, places where you want to have fun.”

Kulik noted that self-sufficiency is key, but there are different typologies to attain it. In response, Kellett says that every city needs a unique aspect, and “a bit of serendipity and randomness” in order to make it a good space.

But at the end of the day, the focus always goes back to people:

In a pandemic-stricken world, cities have had to make alterations overnight in order to reimagine urban spaces and economies. The speakers note that this is a positive side of a crisis. In order to protect and support people, infrastructure is quickly changing in ways such as adding larger pavements and parks, so that people can have more access to open space.

Pivoting to the office environment, Kulik commented that in recent years, cities have been set-up to accommodate commercial environments, where clients see things in terms of saleable areas. However, our current environments must have different ways of establishing value.

Although pricing by person per square foot saves money and makes sense on paper, happiness and productivity have diminished. Office environments and managers need better ways to measure these attributes, as there will be more emphasis on productivity, happiness and wellness in the future.

Conversely, Kellett said that there won’t be too many radical changes in the next couple of years: “You just need to think of the long-term implications of this… of what people actually need to get from work.” From being at home and with families, “people are realizing they want something more meaningful.” Time in offices may shorten (less workdays per week), and people may want shorter commute times or fewer commutes. We may see more accessible satellite offices instead of one HQ that everyone flocks to.

These changes will also impact living patterns. More people may live in suburbia because they can handle a longer commute if it occurs less frequently. Or they may choose to live in denser areas because they want more human interaction and access to culture. Kellett said that we do not yet know the full impacts of our current crisis. 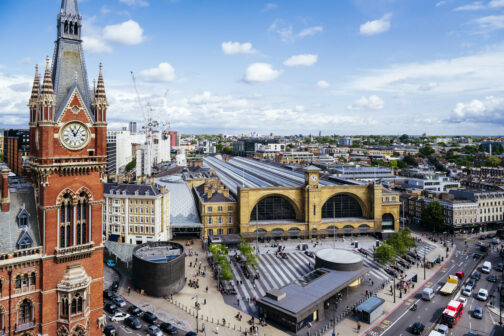 Kulik noted that Kellett’s project, King’s Cross, is a good example of a well-built city. King’s Cross is a development in central London that started as an almost entirely blank slate but has since took ten years to master-plan. The result is a self-sufficient, mixed-use environment, with an abundance of public space, greenery, and accessibility for residents and visitors.

Kellett said, “We started with thinking about the space between the buildings, rather than the buildings. Now that’s paying dividends by 40% of the area as public realm. People were really wanting to use that as a public place to visit friends and family in the social-distanced environment.” The main reason this typology works is because there is space. Instead of focusing on densification, King’s Cross has everything available at resident’s doorsteps without crowding them or requiring them to take public transportation. It is a self-sufficient neighborhood because of its walkability, open-spaces, and strategic tenant mix.

Because we’ve got income streams from other sources, we don’t need to rely on retail wholly. We’ve been able to give three months’ rent free to our retailers – Kellett

By building a neighborhood with a focus on people instead of maximizing space and cost, King’s Cross has achieved pandemic-resiliency.

In conclusion, Kulik and Kellett reached a consensus that our cities need to be reimagined. The mindset of urban planning needs to centre around people. Self-sufficiency and mixed-uses are essential to developing great urban environments. The pandemic may have quickened our transition back to focusing on people, and in turn will help us build the great cities we once created.

Layla Khademi is a graduate student in the MSRE program at the University of San Diego. She received her B.A. from Seattle University in 2019, studying Businesses Administration, Marketing, and Finance. She is excited to be writing for MIPIM under the guidance of Dr. Norm Miller and Stath Karras.