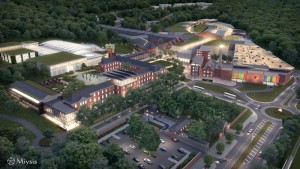 Located immediately next to Liège, the 116-hectare site has been well known since the 1826 foundation of the Val Saint Lambert crystal factory. The project takes into account the rich industrial past of the region. Significant historic building (19th century Castle and 14th century Abbey) will be renovated and/or transformed in order to preserve them while the almost 2-century old crystal factory Val Saint Lambert will remain alive on location and the touristic “destination place” aspect of the project complies with the long-term strategy of the City of Seraing. The project will propose a creative mix of uses comprising housing (110 townhouses and 200 apartments), a 22,450 sqm office park, a 56,480 sqm outdoor shopping center allowing for very low maintenance fees compared to enclosed malls, a 14,950 sqm leisure and entertainment park, a conference center with a 120 rooms hotel, a crystal factory and a museum as well as an extension of the City Hall. Exceptional car accessibility and public transport like a train station literally located at the door of the project – visitors will be able to use the train from next-door Liège and elsewhere as easily as they would use the subway or a tramway line – will be unique assets for the success of the project. A central co-generation heating/cooling and electricity system will ensure both a rational use of energy as well as a most economical one. Construction start in 2014 and will be completed in 2017.